The Palestinian Prosecution launched a new service to protect children from abuse, which is likely to reduce violations against the rights of children. 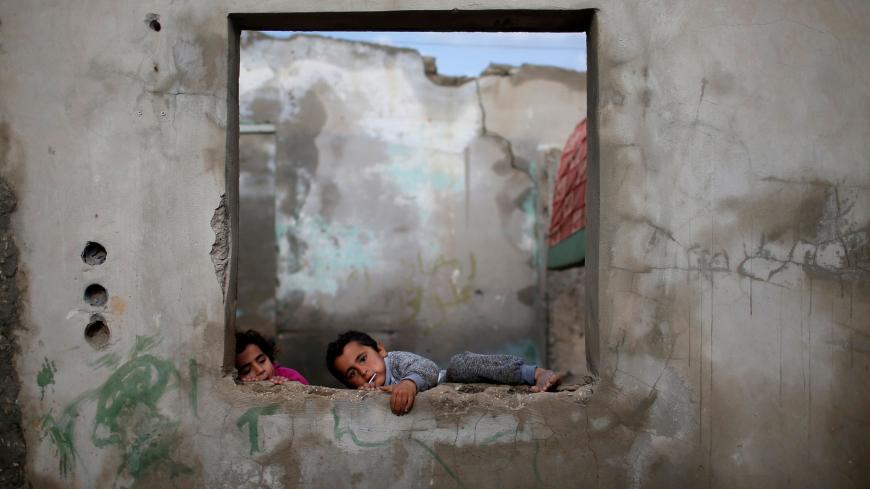 GAZA CITY, Gaza Strip — The Children's Complaints Guide, which is designed to protect children from abuse, entered into force on Jan. 1 in Palestine, after the Public Prosecution Office, in partnership with the Juvenile Prosecution Office, announced its launch Dec. 23, in both the Gaza Strip and the West Bank.

The guide aims at monitoring, documenting, investigating and following up on all violations against children. It also seeks to provide them with safe environments, even in places of detention, foster care or any other place where children may be subjected to abuse.

Children under the age of 18 make up 45.3% of the total Palestinian population — 43.4% in the West Bank and 48% in the Gaza Strip — the Palestinian Central Bureau of Statistics said in a statement April 5, 2018, on the occasion of Palestinian Children's Day.

In general, children are not aware of their rights, but this new guide, which consists of a booklet containing a list of children's rights and forms of abuse, will educate them and encourage them to file a complaint.

Palestine submitted its initial report to the Convention on the Rights of the Child in September 2018, in light of Palestine's obligations toward the international agreements it signed, after it had acceded to the convention in April 2014.

Children’s rights in Palestine are often violated, by Palestinians and Israelis alike. In 2017, Palestinian human rights organizations filed 204 complaints with the Independent Commission for Human Rights (ICHR) — 153 in Gaza and 51 in the West Bank. These are mostly violations to the right to bodily integrity.

The ICHR, which was established by presidential decree in 1993, is tasked with following up on and ensuring that all requirements for the protection of human rights are part of laws, regulations and legislation, and taken into account by Palestinian government departments, agencies and institutions. The ICHR mainly looks into complaints filed by citizens, particularly in terms of human rights violations made by the state.

In this context, Chief of the Juvenile Protection Office Thaer Khalil told Al-Monitor that the Juvenile Prosecution Office has realized that it needs to take action since Palestine has joined the international conventions on human rights, including the Convention on the Rights of the Child.

Khalil noted that the guide will contribute to providing a safe environment for children in Palestine by allowing anyone to file a complaint against violators of children’s rights, and ensure children and their rights are protected.

He said, “Anyone who is thinking about abusing a child will think twice before doing so, knowing that the children's complaints service is active and allows children to file a complaint themselves. We started working on the guide ever since the enactment of the Juvenile Protection Law in 2016.”

Khalil noted that the guide takes into consideration the international conventions signed by Palestine as well as Palestinian laws and legislation. Most importantly, it respects the Juvenile Protection Law.

He explained that the Juvenile Prosecution Office did not convoke civil society organizations in creating the guide, since it follows specific laws and there was no need to hold consultative sessions. Instead, the office involved children in preparing the guide in order to reach communication channels suitable for their ages and to meet their demands. The sessions to discuss the guide were held in partnership with the Children's Council of Palestine, which was formed by the Defense for Children International Palestine (DCI Palestine).

The guide defines the procedures to report abuse, secure protection and ensure obligations as well as the needs of the child. It explains the process to submit complaints and its requirements, and the basic principles and stages of dealing with complaints by the experts. The guide also includes ways to provide legal assistance to those submitting the complaints and lists a free phone number to file complaints.

Khalil pointed out that it is the first time Palestinian children are involved in the creation of a guide to secure their safety and rights, noting that the guide includes a letter signed by the children who took part in the drafting.

“The guide's aim is to monitor and document all violations against children by those involved in dealing with children,” Khalil said.

He added that violations and abuse can be physical, psychological, verbal and sexual, and any treatment that violates a child's human dignity could be considered abuse. According to Khalil, the guide also explains legal texts allowing the Juvenile Prosecution Office to pursue and hold accountable those found to be involved in violating children's rights.

Khalil explained that the guide will raise awareness among children about the importance of filing complaints against those who violate their rights. An advertisement campaign to promote the guide will be launched, and the guide will be distributed to all schools in the Gaza Strip and the West Bank and will be available online.

He further noted that the guide was written in a language children can understand, in addition to it containing drawings explaining how to file a complaint.

He added, “Children can file complaints by email or through the guide's social media pages. They can also call or file the complaint with the Juvenile Prosecution Office in person.”

Khalil stressed that the guide values privacy and confidentiality, noting, “Once it is established that abuse has taken place, the Juvenile Prosecution staff need to ensure that it will never happen again by holding the abusers accountable and finding a solution to each situation.”

He said that the Juvenile Prosecution Office will take 10 days to a month to respond to complaints.

The Juvenile Prosecution Office was established in 2016, to protect children at risk and to inspect care homes as well as raise awareness and provide legal services. In 2018, it looked into 2,100 cases reported by parents or relatives of children or employees, according to Khalil.

Ayed Abu Eqtaish, director of the accountability program at DCI Palestine, told Al-Monitor, “Despite the enactment of the Juvenile Protection Law, it continues to be violated with recurrent abuses against children.” He said many children are arrested by the Palestinian police and intelligence services, instead of the juvenile police that is the only authorized party to do so.

He added that enacting the Juvenile Protection Law goes in line with the Convention on the Rights of the Child, but there are economic, cultural, social, security and political aspects that Palestine needs to fix in order to be more consistent with the convention, such as amending the Inheritance Law, the Family Law and the Palestinian Disability Law. He said that the DCI supports children's rights in Palestine.

Abu Eqtaish praised the guide that allows children to file complaints easily, noting that this will limit the violations committed against them.

Director of Palestine Save the Children Foundation Iman Barghouthi recommended that the Palestinian laws on the Penal Code, family and inheritance should be amended in order for them to be in line with the provisions of the Declaration of the Rights of the Child, noting that only the Juvenile Protection Law has been amended so far.