After joining international conventions and treaties, Palestinian authorities are developing new means of preventing torture, while Gaza Strip lawmakers are about to pass a law providing for alternatives to prison for lesser offenses. 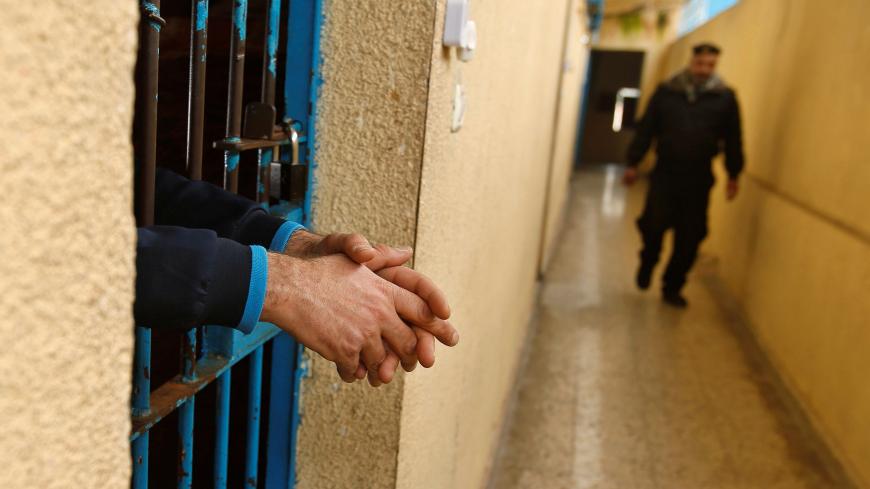 GAZA CITY, Gaza Strip — Palestine is expected to pass a law establishing its national protocol for preventing torture at the beginning of 2019.

On Sept. 19, the Ministry of the Interior in Ramallah, the West Bank, met with several human rights and civil society organizations and the Independent Commission for Human Rights (ICHR) to discuss establishment of the National Preventive Mechanism (NPM). Developing this mechanism is one of Palestine’s obligations after President Mahmoud Abbas signed in March the Optional Protocol to the Convention against Torture (OPCAT).

OPCAT specifies that participants will establish at least one body to visit and inspect prisons and other detention facilities to prevent "torture and other cruel, inhuman or degrading treatment or punishment (hereinafter referred to as the national preventive mechanism).”

The NPM will be deemed a national human rights body tasked with combating torture and promoting human rights and public freedom.

In the same context, the Palestinian Legislative Council (PLC) in the Gaza Strip is discussing its final version of a draft law examined in August that provides for alternative punishments and sentences in line with the ratified international human rights conventions. These alternative sentences include house arrest, community service, restraining orders, electronic monitoring, and rehabilitation and training programs.

Al-Monitor talked about the NPM with Haytham Arar, the head of Democratic and Human Rights at the Ministry of Interior.

“The protocol aims to establish a system of regular and unrestrained visits by independent international and national bodies to freedom-deprivation quarters," such as correctional, rehabilitation and holding facilities, shelters for battered women and mental hospitals. The inspections will be designed to "prevent torture and other cruel or inhumane treatment or punishment," she said. “The establishment of the NPM will take into account the Israeli occupation of Palestine, and the nature of the current political system based on pluralism and respect for human rights. The NPM will be established as an administratively and financially independent institution to ensure its impartiality.”

The ministry plans to consult with relevant government authorities and civil society organizations about creating an independent organizational structure and management, Arar added. Abbas is expected to issue a decree appointing NPM members by Dec. 27 so the mechanism can be implemented in 2019.

NPM members “will visit all facilities where a citizen could be subjected to torture,” she said, “After the visit, NPM members will draft evaluation reports to be submitted to the concerned government bodies, including recommendations for the development and improvement of the detention centers to ensure the well-being of the persons detained there.”

Arar hopes to see Palestine free of torture policies so the rule of law and human rights are fully observed. She also noted that rapprochement between the West Bank and the Gaza Strip would facilitate NPM operations. “The division is preventing Gazan citizens from enjoying their life and rights,” she said.

ICHR legal researcher Ammar Jamous told Al-Monitor that OPCAT “urges its state parties to cooperate to ensure the right of every person not to be subjected to torture." He added, “By signing OPCAT, Palestine became bound to deal with the Subcommittee on Prevention of Torture and other Cruel, Inhuman or Degrading Treatment or Punishment, and to allow it to make unannounced visits to freedom-deprivation quarters in coordination with the Palestinian NPM.”

Jamous said cases of torture are increasing in the West Bank and in Gaza, according to the ICHR’s 2017 annual report, despite all the international treaties and conventions Palestine has recently ratified.

He called on government agencies to take appropriate measures to implement these conventions, stressing the need to enact criminal laws against all forms of torture. Jamous pointed to Palestine's slow implementation of its ratified conventions, as the Palestinian Authority hasn't convened the PLC for a regular session since the 2007 Fatah-Hamas internal division and the West Bank-Gaza split.

“Palestine is not adequately examining international conventions before their ratification. It isn't discussing the proper implementation methods and their suitability to the Palestinian situation. Ratifying a convention entails obligations," Jamous said. “Some governing authority bodies in Palestine reject the idea of change. For example, the security services that practice torture in correctional facilities and rehabilitation centers will of course not be pleased by such conventions, since they still use torture to obtain confessions or to punish inmates. However, the state must put in place a mechanism that guarantees the independence of the NPM and its freedom of action without being subject to harassment.”

Nafez al-Madhoun, secretary-general of the PLC in Gaza, told Al-Monitor that PLC members there discussed a draft law on alternative sanctions to apply standards that respect human rights, and how to eliminate sanctions that restrict freedoms. “These sanctions have proved to negatively affect inmates in correctional facilities and rehabilitation centers. It is necessary to amend and develop the penal code in force in the Gaza Strip," he said.

“A person could go to prison over a crime and come out having gained a whole new criminal culture. Detention centers are overcrowded with convicts having committed diverse heinous crimes.”

Madhoun pointed to the difficult economic situation in Gaza that caused detention centers to become overcrowded with inmates convicted of finance-related misdemeanors. According to the police department in the Gaza Strip, about 98,314 arrest warrants were issued there in 2017 for such offenses.

“Alternative sentences should be imposed on these convicts,” he said, “The type of this alternative punishment depends on the type of offense committed, as well as the behavior of the inmate.”

Madhoun added, "The draft law will be passed into a law soon, since it was accepted by the members of the Hamas-controlled PLC in Gaza and all competent authorities, including the public prosecution and the courts.” Once it's passed, "this law will be applied immediately.”