Many women in Idlib have been subjected to online harassment and blackmail, where their personal data posted on social media have been exploited for financial or moral gain, or for sexual exploitation purposes. 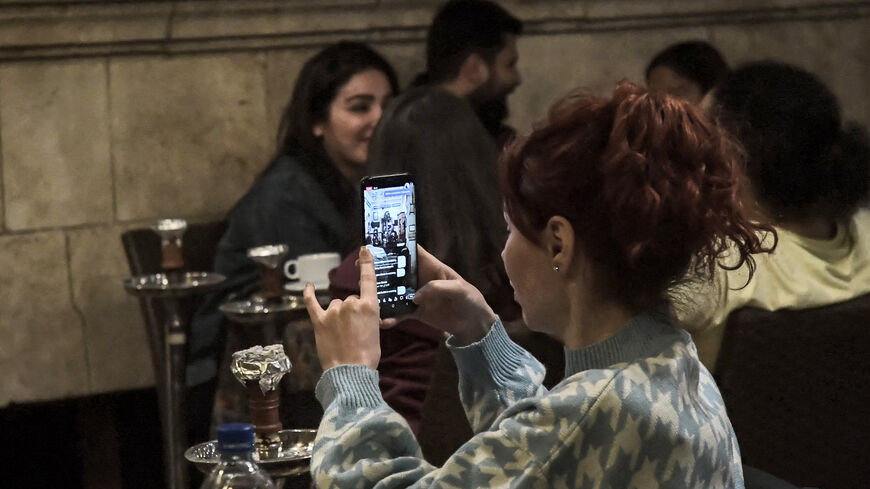 A woman uses her phone to livestream a traditional "hakawati" storyteller performing late after midnight during the Muslim holy fasting month of Ramadan, at the historic Dar Halabia Hotel in the Bab Antakya area of the Old City of Aleppo, Syria, April 12, 2022. - -/AFP via Getty Images

Women in Syria’s northwestern province of Idlib are facing increasing cyberharassment, as many are subjected to moral and material exploitation.

Abeer Qadour, a 20-year-old woman from Idlib city, had her education and future ruined after being subjected to online harassment by a young man who deliberately harassed her and violated her privacy on social media.

She told Al-Monitor, “It all started when I [added] this guy to my Facebook friends list some time ago. He would regularly comment on my posts, then things evolved. After a period of time, he started getting into the details of my private life, and then he asked me out. When I refused, he photoshopped my profile picture to make it look like I was indecently dressed, and he started threatening that he would publish it.”

Qadour said that she did not respond to the harasser and blocked him. But it was not the end. He sent the photoshopped picture to her brothers’ accounts. They hit her and forced her to drop out of school. In their eyes, she was the guilty one.

She noted that society is not merciful toward women and their side of the story tends not to be believed. That is why most of Qadour's friends preferred to remain silent and refused to back her, so as to avoid accusations and violence at the hand of their families and society.

Qadour added, “No one protects us from these harassers. Even the laws neglect us, and the lack of implementation of these laws has led to this frightening rise of harassment on social media.”

Ola Salloum, a 23-year-old woman from the town of Kafr Losin in the northern Idlib countryside, also fell victim to online blackmail as her phone was hacked by a person she could not identify.

She told al-Monitor, “Early this year, I started receiving threats from a fake account on [Facebook] Messenger from a person who got access to all my photos and personal data. He threatened to publish my conversations and personal photos if I don’t pay him money. But I refused and blocked him. He then contacted me from unknown [phone] numbers and accounts. This turned my phone into a nightmare threatening my security and disturbing my peace.”

Salloum said, “As a result I went through episodes of stress, anxiety and depression, and a constant feeling of insecurity, fear and lack of trust in others.”

She then decided to break her silence and to tell her sister and older brother about the abuse and threats she was exposed to on social media. Her brother contacted the blackmailer and threatened him that he is capable of identifying him and would file a lawsuit. He then stopped the threats.

Underage girls also are not spared online harassment. Abusers take advantage of their lack of life experience and fear of disclosing their identity and reporting them, to lure them and push them into their trap.

Hoda Hamsho, 16, from Sarmada in the north of Idlib, was forced to delete all social media apps from her cellphone after she was repeatedly subjected to online harassment. She told Al-Monitor, “Someone collected information about my life and started stalking me and writing comments and obscene words.”

She noted that he did not only write comments on her page, but also sent her private messages and nude photos.

Hamsho said that she ignored his messages and insults and deleted her Facebook account to end the pain she felt. “Many harassers satisfy their desires through online harassment, away from the security services’ eyes,” she said.

Faced with this harsh reality, the Idlib-based Glimpse of Hope organization for women opened last year a center that provides training courses for women on phone maintenance in order to help them protect their privacy. The training courses are regularly held at the center in Idlib.

Sawsan Saeed, one of those in charge of the project at Glimpse of Hope, told Al-Monitor, “Phone repair shops provide a great opportunity for harassers to find new victims by hacking their personal devices and opening them in different ways so as to blackmail the victim. Therefore, women are usually forced to delete all data on their phone before sending them for repair, for fear for their privacy and for leaving them in unsafe hands. But the women’s center that we opened provides safe maintenance and programming services.”

Salma Kayyal, a social worker at the Baraem al-Mustaqbal private school in Idlib, spoke to Al-Monitor about online harassment, saying, “In-person encounters are no longer necessary for the harasser to meet his victim, as women have become targeted by online harassment in different ways, starting with anonymous messages, insults and sending offensive photos, blackmail, defamation, threats, stalking and manipulation of photos on their personal pages.”

She defined online harassment as the use of the internet to communicate with someone, with the intent of causing sexual and social harm and blackmailing the victim.

Kayyal stressed that the virtual world contains a lot of information about individuals, which makes it easier to pick a victim.

She attributed online harassment to the widespread and diversity of social media platforms, the lack of family control over children’s use of the internet, the difficulty of detecting the culprit who often uses fake names and accounts to reach his goal, and the absence of laws that deter and track cybercrimes.

Kayyal said that online harassment targeting women is a form of violence against women and the most prevalent form of human rights violations, as it leaves psychological and emotional effects that do not disappear even after the perpetrator is stopped. Therefore, the victim needs support and psychological help to go back to her normal life, she noted.

She added that many girls just remain silent about online harassment out of fear for society that deliberately blames and abuses women, and restricts their freedom.

She advises women who have been subjected to online harassment not to remain silent and complacent, but rather to expose the harassers until they stop what they are doing, and to set an example for others, either by taking photos of the abuser and screenshotting their conversations or submitting them to the competent authorities.

Kayyal concluded that online harassment is a serious cybercrime and is dangerous because it threatens girls and women in conservative societies by publishing personal information, photos and videos that would destroy their entire lives.

by Ismail BELLAOUALI with Philippe AGRET in Rabat and Marie GIFFARD in Madrid | AFP | Jun 24, 2022
END_OF_DOCUMENT_TOKEN_TO_BE_REPLACED