The rise in social media in the West Bank and Gaza Strip has been accompanied by an increase in cybercrime, but many women are reluctant to report it. 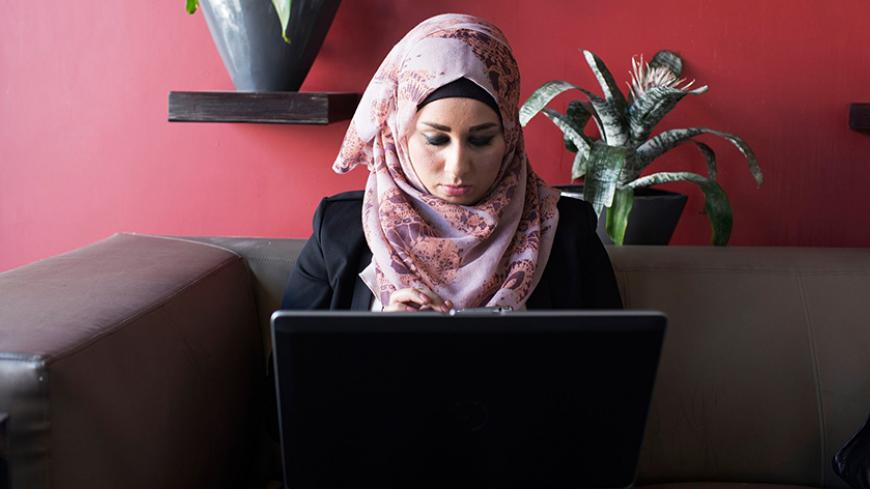 A Palestinian woman works on her laptop in a coffee shop in the West Bank city of Ramallah, Sept. 18, 2013. - Ilia Yefimovich/Getty Images

RAMALLAH, West Bank — According to Palestinian police reports from Dec. 7, 2015, a 25-year-old woman, A. B., from Hebron fell victim to Internet blackmail, when a young man from a city in the northern West Bank hacked into her Facebook account, stole private photos of her and threatened to publish them. The woman was forced to pay him 10,000 shekels ($2,500) and 250 grams of gold in the hope that he would not make her photos public. The man threatened her until she ran out of money and went to the police cybercrimes unit, which followed up on the case and arrested the man.

Louay Erzikat, official spokesperson for the Palestinian police, told Al-Monitor, “Cybercrimes are on the rise in Palestine, especially in light of technological developments, the Internet and social networking sites. Around 1,020 cybercrimes were registered in 2015 in Hebron, the most populous area in the West Bank, compared to 922 in 2014.”

Cybercrimes typically involve blackmail, defamation and hacking into social media accounts and credit card information. Many Palestinian women and girls who have been subjected to blackmail or other online threats are reluctant to file complaints with the police given that the situation typically involves a sensitive matter, which can be intimidating in a conservative society.

Statistics from the Ministry of Communications and Information Technology published in May 2015 revealed that 48.3% of households in Gaza and the West Bank have Internet service, and about 63.1% own computers. Among individuals, 53.7% over 10 years of age use the Internet, while 75.1% of Internet users participate in social networks. Seventy-five percent of social network users create accounts to meet new people, while 76.5% use them for entertainment.

Erzikat said that most of the cybercrimes recorded by the Palestinian police concern blackmail, defamation and theft. “Women are the main victims, since they fear some of their pictures or private information will go public, and they [often] lack the courage to go to the police,” he said.

According to Erzikat, efforts by the Palestinian police and the judiciary to fight cybercrime are hindered by the absence of laws that might deter such activity. “The Jordanian Penal Code No. 16 of 1960 is enforced in the West Bank, and Egyptian law is enforced in Gaza, both of which are outdated and obsolete and do not mention anything about modern infractions like cybercrime,” he said.

“We are now adapting cybercrimes to the penalties stipulated by Jordanian law, but these are not deterrent penalties. If this law is applied, a cybercriminal would only be sentenced to three months in prison or to a fine not exceeding $70. We need a clear and explicit law that criminalizes cybercrimes and provides deterrent penalties for perpetrators,” said Erzikat.

Majed Arouri, an expert on media and judicial affairs, told Al-Monitor that there is an urgent need to develop appropriate legislation. He suggests that the Jordanian penal code be amended or a new law ratified to include explicit and deterrent penalties for cybercrime, primarily for violations of privacy, blackmail and threats.

Arouri warned, however, that the Palestinian Authority could possibly exploit new cybercrime legislation to impose restrictions on online access and freedom. He also stressed, “A broad civil discussion [is needed] about any draft law to prevent restrictions on public and press freedoms.”

Human rights, women's and civil society organizations have been demanding for years that President Mahmoud Abbas ratify a new penal code in the absence of the Palestinian Legislative Council convening.

Arouri further noted the importance of discussing cybercrimes at social and educational levels to inform girls and boys, as well as their parents, about how to deal with such situations and report them to the relevant authorities. The Palestinian Working Women Society for Development had launched a campaign in Ramallah in 2014 against sexual violence on social networking sites and raised awarenes about online harassment of children and girls through websites and messages on social networks.

“Blackmail is one of the most prevalent crimes, especially against young girls,” said Jalal Khoder, an attorney and legal adviser at Sawa, an organization combating violence against women. He told Al-Monitor that cybercrimes are on the rise as the number of Internet users increases. Some users are initially unaware of the potential hazards and how to avoid them.

Sawa provides a hotline for complaints about violence against women and children. The police do not publicly disclose information about children subjected to blackmail, so it is difficult to obtain firsthand information about cases.

Khoder said, “Dozens of women and children suffer from violence, either through social networking sites or through the use of smartphones, which students use. Some students use smartphones to bully their classmates, by taking embarrassing pictures of them and publishing them on social media. Other cases of threats and blackmail are also referred to the Palestinian police.”

Khoder added, “There is an urgent need for a penal code in line with modern technological developments in society. Thus, the law should include a section on cybercrimes to dissuade offenders from committing such crimes again.”

Like others involved in the issue, Khoder believes education is a must. He said, “It is important to raise awareness, especially in schools and universities.”

Amal Dohaidel, a psychologist at Birzeit University, told Al-Monitor that she has dealt with numerous university students who had been blackmailed. “[Cybercrime] psychologically affects young men and women who fall victim to it. It could destroy them psychologically and socially and ruin their future,” she said.

Dohaidel stressed that parents need to build trust and openness with their children and raise their awareness about using the Internet and maintaining their privacy. He said, “Parents should watch their children’s behavior and actions and get to know the people they are talking to on the Internet.”