How Palestinian authorities plan to clamp down on cybercrime

The establishment of a cybercrime task force in Palestine aims to deter e-crimes, which many Palestinians are falling victim to and are not reporting to the police out of fear and intimidation. 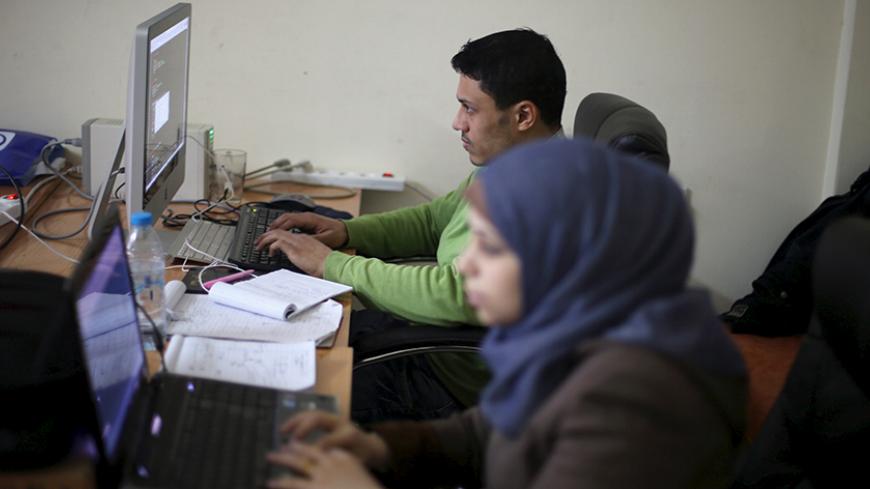 GAZA CITY, Gaza Strip — On Jan. 2, Palestinian Authority (PA) Attorney General Ahmed Barak issued a decision to commission members of the Public Prosecution to start operating the Cybercrime Task Force in preparation for the issuance of the Cybercrime Law, which is expected to be passed in the first half of the year.

Amal (a pseudonym) is a 26-year-old woman from Jenin, working in a private production company. Her Facebook account was hacked, but she did not file a complaint with the police forces. Instead, she contacted an IT technician who managed to recover her account.

“I did not file a complaint because this might take a while to be solved and might further complicate things. All I wanted was to recover my account, and I managed to do so without referring to the police,” she told Al-Monitor.

Azriqat told Al-Monitor that the concept of e-crimes includes all law-breaking offenses committed through the use of a cellphone or a personal computer connected to the internet. He also said that e-crimes have similar elements as regular crimes, including a perpetrator, a victim and a crime tool. Azriqat said that there is a direct proportion between the increased use of electronic equipment and the increase in crimes associated with them.

Azriqat added that the statistics on the number of cybercrimes in Palestine are not accurate, as they include only the reported cases, knowing that many victims do not file complaints out of fear and intimidation by the perpetrator. This is not to mention the lack of awareness about the danger of impunity, which leads to more crimes. He said that the most common types of cybercrimes in Palestine are defamation, extortion, threat and theft, noting that more men than women use the internet, which means the crime rate is higher among male internet users.

Commenting on the reason behind the spread of cybercrimes, Azriqat said that this is due to ignorance and lack of experience in using the internet, not to mention the lack of use of safety precautions. He added that some internet users lack a sense of security, which makes them more prone to such crimes, noting that cybercriminals usually try to lure victims online in order to access or hack accounts or websites.

Regarding the necessary procedures and actions the police are taking to reduce the rate of cybercrimes, Azriqat said they are working on two levels. First they are following up on complaints and carrying out investigations, and second they are raising awareness about the threats and consequences of cybercrimes through lectures and seminars in educational institutions and nongovernmental organizations, as well as through the local media. He noted that in 2016 the police managed to solve 55% of the reported crimes immediately thanks to the capabilities and material they have.

“We have the Cybercrime Unit that was established in 2014 by the PA. It includes technicians trained at home and abroad to develop their skills and abilities to expose perpetrators,” Azriqat said, refusing to disclose the techniques they use to detect and follow up on crimes for security reasons.

About the Public Prosecution decision to establish a Cybercrime Task Force, Azriqat said it was too early to gauge the impact of such a task force on the crime rate, noting that he expects this rate to decline. Azriqat also said that the establishment of the task force would coincide with the passing of the Cybercrime Law, which addresses all forms of e-crimes and ways of dealing with them. Of note, the current applicable law in Palestine is the Jordanian Penal Code No. 16 of 1960, whereby the punishment is handed out according to said law and type of crime.

In this context, Nisrine Zeina, the head of the Cybercrime Task Force, told Al-Monitor, “The decision to establish the task force came after the e-crime rate has been rising by 40% annually. Not to mention the perils of these crimes on the Palestinian community.”

According to Zeina, e-crimes have become rampant because they do not follow the same traditional crime pattern. They are carried out with modern technology tools that are available to everyone and can be committed anywhere and anytime, and they are easily committed compared to other types of crimes.

“The provisions of the Jordanian Penal Code are loose and nondeterrent, as they do not include anything on cybercrime. We need law texts that are more detailed and specialized to keep pace with the technological development. This needs to happen in tandem with the establishment of the Cybercrimes Task Force in order to prevent the spread of this type of crime,” Zeina said.

She added that the term “cybercrime” includes electronic and technical cybercrime and is not only limited to defamation and extortion, but it also embraces e-viruses and electronic spying, among other e-crimes. She noted that they are trying to create a solid mechanism to combat these crimes through training of staff, judiciary control as well as the establishment of a specialized unit.

According to Zeina, the attorney general took gradual steps in the establishment of the task force. In 2006, a cybercrime unit was established by a decision of the PA Public Prosecution in the West Bank, operating on a small scale. In 2009, the unit was fully operational as it followed up on cybercrimes and coordinated with the concerned authorities, such as the Ministry of Telecommunications. In 2014, a police cybercrime department was established. In 2016, the attorney general established the Cybercrime Task Force, and on Jan. 2, he commissioned members of the Public Prosecution to start operating the task force.

Zeina said that the prosecution has trained 164 members to deal with e-crimes, with 26 members distributed among 13 prosecution departments across the West Bank. These members received intensive technical and professional training at the hands of foreign and local experts in order to be able to deal with cybercrimes, learning about methods of interrogations, and tracking and analyzing digital evidence in order to take the necessary steps and measures.