Cybercrime is on the rise in the Gaza Strip, where an absence of relevant legislation has facilitated criminals' efforts to intercept Internet-based phone lines and sell minutes. 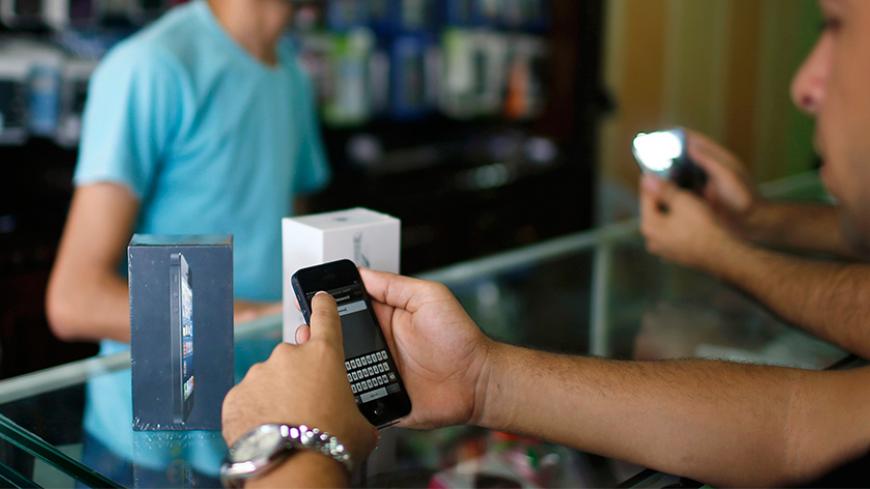 RAFAH, Gaza Strip — When an unemployed person in the Gaza Strip suddenly shows signs of affluence, people often suspect he has joined the growing ranks of Internet phone hackers. These hackers have even formed a small social club in Gaza that is difficult to penetrate.

The Gaza Strip constitutes a fertile ground for electronic criminal activities in the absence of modern tools for law enforcement. In addition, victims of electronic crimes are unable to file complaints against these criminals, as hacking falls within the digital world, which is hard to pursue and monitor.​

The hackers are commonly said to “work with IPs,” or Internet Protocol addresses — the numerical equivalent of a domain name that identifies devices connected to the Internet.

Hacking phone calls using Voice Over Internet Protocol (VoIP) first emerged in the Gaza Strip in 2007, with the isolation caused by the Israeli blockade. Legend has it that a professional programmer broke into phone networks to communicate for free with his family residing outside Gaza. He started offering free service to his friends who wanted to make international calls. After that, he signed contracts with local communication offices to offer customers international service at below-market rates and shared the profit with the office owners.

The second, more professional and profitable phase of hacking appeared in Gaza in 2009. As the story goes, a student going by M.H. went to Algeria to complete his studies in information technology. However, after he got involved in Internet hacking operations and was being pursued legally, he returned to his home in Rafah. Palestinian law enforcement has not caught up with the technology, so M.H. became rich as his reputation grew.

M.H. began making huge profits reaching millions of dollars by diverting Internet communication lines using his own software and selling the service. This is the story told by the majority of hackers who met with Al-Monitor in Rafah, where hijacking calls is most active.

Working with IPs became the most common and profitable profession, and it spread among the unemployed. Mohammed Hassan (a pseudonym), who graduated from the faculty of information technology at the Islamic University of Gaza, told Al-Monitor he develops hacking software and tools that automate the tedious process of randomly trying different combinations of numbers to find IP addresses and break into servers. “I no longer like to directly work in hacking calls,” he said. “I prefer working on developing programs that facilitate the hacking process, then selling them to hackers in Gaza. The prices of the hacking software differs for each client, depending on their ability [to pay] as well as the nature of the software.”

Khaled Ayoub (a pseudonym), told Al-Monitor, “Breaking into the server is the first step. … [Then] I divert the communication lines to my personal panel, which I legally bought from an Internet hosting company. I then resell [the lines] to my personal account” before the server’s programmers can detect the activity. “I also take all the [minutes’ worth of phone calls] and add them to my personal panel. Programmers often discover that someone broke into the line after they receive huge bills, so they start checking lines and work to fix the loopholes. This is why we transfer money on a weekly basis, before they receive the bills and find out about us.”

On the process of transferring money, Ayoub said, “The communication company that hosts my panel transfers the value of the used minutes — which I took — to a bank account belonging to a Palestinian trader abroad who is also in on the hacking operation. The host company then sends a notification to my email about transferring the money to my panel. At the same time, the trader receives an email about the amount that entered his account. I take the money in cash, and the trader takes 12% of each money transfer he does for us.”

To facilitate the money-wiring process resulting from hacking, many exchange offices opened in Rafah and are part of the black market. They receive money from countries such as China and Libya via the accounts of Palestinian traders connected with the exchange offices, and then they give the received amounts to hackers in Rafah.

A number of hackers avoid the complexities of receiving cash from other countries by buying goods on the Internet, exporting them to Egypt and then smuggling them through the tunnels between the Egyptian side of Rafah to the Palestinian side into Gaza. Thus tunnel smuggling and online hacking became connected.

Money changer Khaled Ali (a pseudonym) estimates hackers in the Gaza Strip make a total of around $5 million per month. He noted that after the money enters his account in a bank abroad, he provides hackers with amounts ranging between $500 and $100,000 on a weekly basis.

Ali told Al-Monitor the number of international call hackers working in Gaza is about 20,000, the majority of whom are former Palestinian Authority employees who stopped working. He expects the number of hackers to keep rising.

After Hamas took control of the Gaza Strip in the summer 2007, Gaza turned into a fertile ground for hacking. With one hacking operation, a hacker in Rafah can make companies anywhere in the world lose millions of dollars by accessing their servers. Hackers use the lack of communication between Hamas security services in Gaza and Interpol to their advantage. Also, there are no laws on the local level against piracy crimes in Gaza. Cybercrime is a modern issue, while Palestinian law dates back to 1936 (Penal Code No. 74).

In an attempt to update the Palestinian Penal Code, the Palestinian Ministry of Justice issued in September 2014 a research paper prepared by Abdul-Karim al-Shami, head of the research and legal studies department at the ministry. The paper, titled “Computer and Cyber Crimes in the Palestinian Legislation,” discussed the absence of specific legislation on cybercrimes in Palestine and was submitted to the General Secretariat of Arab Interior Ministers.

The paper stated, “However, these crimes can be prosecuted through the adaptation of texts from the Palestinian Penal Code so that they could also include certain computer-related crimes — such as the texts on theft and fraud, dishonesty and destruction and other crimes.”