A glimpse into the world of Gaza’s cyber pirates

Home to more than 2,000 hackers, the Gaza Strip is no longer the isolated place it used to be, with rising cyberattacks driven by national and personal motives. 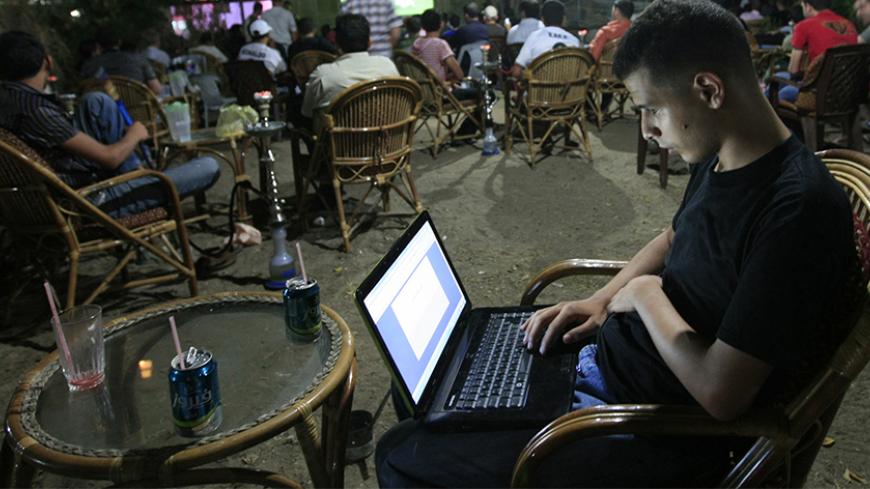 RAFAH, Gaza Strip — Operating from a Rafah suburb south of the Gaza Strip, a young man under the pseudonym Salem Mohammed has been involved in cyber piracy with his local group known as “Hackers Special Elite” for more than eight years.

Salem, who changed his group’s name from Kira to Hackers Special Elite in 2014, revealed that on April 7, and along with seven Arab and international groups, he will be taking part in cyberattacks targeting international and Israeli organizations considered hostile to Palestinians and Arabs.

Salem provided Al-Monitor with videos in which he explains a number of cyberattacks his group has launched, including one against a Polish telecom company on Jan. 5.

These Arab and Palestinian cyber pirates operate within a network in order to achieve better results. However, their activities are not limited to cyber vandalism, but extend to making illegal profit by breaking into corporate and organization websites.

Salah Ahmad (a pseudonym), 22, a resident of west Gaza, told Al-Monitor, “My involvement started three years ago by hacking into social media and email accounts. But my activities quickly evolved into hacking Visa credit cards and multinational company websites.”

Ahmad said, “We are now working on developing fake websites for companies. For example, we have access to the personal data of people who register on these sites to book a flight, and this allows us to steal their money. We use hacked credit cards to book flights for Gazans on request, receiving a part of the original sum. For instance, for a ticket that costs $600, we only obtain $200. Moreover, we break into banks’ databases from around the world and we buy some products with the money.”

Ahmad, a member of another group of six people that does not have an official name, said that hacker groups are widely found in the Gaza Strip, and they have become more organized today.

Mahmoud Abu Ghosh, data security expert and lecturer at the University of Palestine in Gaza, estimates the number of hackers in the Gaza Strip to be 2,000.

Articles 43, 44 and 45 of the Palestinian Electronic Transactions Act No. 6 of 2013 criminalize people who illegally break into others’ computers and take over their systems or use their data without permission. These articles include penalties such as imprisonment from one to 10 years and a fine ranging between 2,000 to 20,000 Jordanian dinars ($2,818 to $28,186).

Abu Ghosh told Al-Monitor that hackers in the Gaza Strip are divided into two types: “The first is driven by national motives, aiming to destroy, disable and collect data from Israeli sites. These groups are often organized, entrusting this task to other specialized groups. The second type launches cyberattacks for personal or party goals and seeks to destroy, sabotage or spy sometimes.”

The past five years have seen the emergence of legal organizations that offer training in the field of cyber piracy, but the goal shifted toward security against cyber piracy. A case in point is Vision Plus, which specializes in technological training.

CEO Mohammad Agha told Al-Monitor, “Gazans and the world are facing growing challenges with regard to security due to the advance of the Internet.”

He said, “It is true that our community in Gaza is isolated from the rest of the world, but technology isn’t, and the Internet is undergoing significant advances. We have come to understand that there are many underlying challenges like when someone violates our privacy by hacking into our emails. This is why we started offering anti-piracy courses in order to guarantee a safe community.”

Agha noted that these courses, which cost about $100 to $150, have graduated more than 600 people over the past five years. To prevent any illicit use, they exclude people who wish to learn to hack credit cards.

Agha added, “Some of those who attend our courses are looking to learn hacking, but once we tell them they must sign an agreement to refrain from using the training for illicit purposes, they leave, because their goal is piracy, theft and vandalism, not security. Nevertheless, people tend to enroll in anti-piracy courses to protect themselves and their companies from cyberattacks. It is really another example of a double-edged sword that can be used for the good or the bad.”

Given the remarkable digital development and the Gaza Strip’s increasing openness to the world through technology, young Gazans are provided with a great opportunity to develop their hacking skills, whether they were driven by personal motives like theft or national ones like infiltrating Israeli websites.