Victims hope a new cybercrime law will help them gain rights, get fair compensation and receive legal protection, but some Palestinians fear the law will constitute a tool of repression. 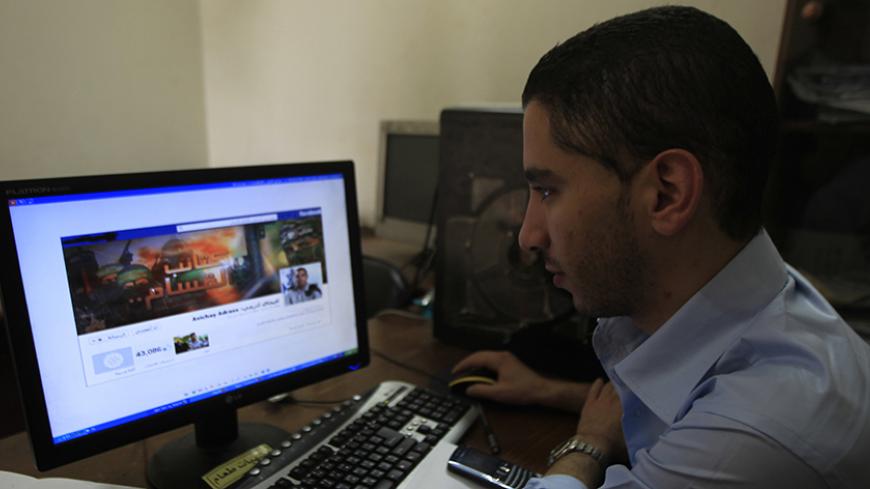 A Palestinian man looks at the Facebook page of Avichay Adraee, the spokesman of the Israeli army to the Arabic media, after hackers replaced his cover photo with that of the Izz ad-Din al-Qassam Brigades during the #Op_Israel campaign launched by the activist group Anonymous, in Gaza City, Gaza, April 7, 2013. - SAID KHATIB/AFP/Getty Images

Palestinian President Mahmoud Abbas recently approved a law to battle cybercrime in the West Bank, but some journalists and citizens worry ulterior motives might be involved.

The version of the bill Abbas signed June 24 isn't the one journalists and the public were expecting, said Nabhan Khreisheh, a member of the Union of Palestinian Journalists' General Secretariat. He told Al-Quds Al-Arabi newspaper June 27 that the law is a "retrograde step" designed to intimidate Palestinians and keep them from criticizing the political system.

The law undermines freedom of expression online, he said, contending that it was passed in part so authorities could block more than 11 websites affiliated with Hamas and parliament member Mohammed Dahlan, an Abbas rival.

The new law regulates online transactions, media websites and social networking sites, imposing fines on those violating public order or inciting hatred on these websites. It states, “Anyone who has established a website, disseminated information on the internet or any information technology tool, promoting ideas and programs violating the public order and morals, [will] be sentenced to prison for a period of no less than five years.”

"The legal and judicial importance of the law stems from the fact that it deals with cybercrimes, which have been on the increase in the Palestinian territories in recent years," Palestinian police spokesman Louay Arziqat in Ramallah told Al-Monitor.

The year 2015 witnessed 502 cases of cybercrimes committed against individuals and institutions in the West Bank. In 2016, that number jumped to 1,327. By the end of the first half of 2017, police had received 700 cybercrime reports, according to Arziqat. And those are just the reported crimes.

Among individuals (as opposed to institutions and businesses), 37% of cybercrime victims are females, according to police statistics, and young people are most vulnerable to cybercrimes.

Police have a Cybercrime Unit comprised of an officer and engineers with extensive experience in the field to follow up on reports of crimes committed against individuals, in cooperation with the public prosecutor.

Arziqat cited a recent case in which police arrested a young Palestinian man May 21 in the city of Nablus who is now charged with online fraud for allegedly blackmailing a young woman.

"They had started chatting online and he promised he would marry her. She sent him some of her private photos, which he used to blackmail her, threatening to publish them online if she didn't pay him the money," Arziqat told Al-Monitor.

According to police, the man first demanded $25,000. After she paid, he demanded another $68,000. She reportedly told police she stole the money from her parents, before eventually filing a complaint with police. Arziqat said police arrested the man, but he has not been tried yet. Some of the money was recovered.

Punishment under the previous law, ranging from one week to six months in prison, wasn't strong enough to be a deterrent, Arziqat added.

Lina Abdel Hadi, Nablus governorate legal director, told Al-Monitor that the cases currently pending before the court will be tried under the new law. In some cases, offenders will face jail time only, but when money was extorted and/or psychological damage can be shown, the offender will have to financially compensate the victim and face a jail sentence.

Hadi said, “The new cybercrime law will compensate those who were previously subjected to [such] crimes, whether a person or an institution, and who were not granted their rights" because the previous law was outdated.

The most common types of cybercrimes in Palestine, according to Hadi, include sexual extortion; running websites for prostitution, child trafficking and drug trafficking; spreading online viruses; hacking; fraud; and identity theft.

She stressed that many Palestinian activist groups demanded the new law, noting the inadequacy of the old one.

Palestinian officials and civil organizations have worked to increase public awareness of the dangers of cybercrimes through educational seminars, as well as newsletters distributed via various social networks and websites.

Fadi Shadid, a criminal law professor at An-Najah National University, said the new law was issued based on the urgent need to confront the high rates of cybercrime and the absence of clear legal provisions to address cybercrimes in light of the electronic revolution.

“There is a saying worldwide that goes: There is neither crime nor penalty except as provided by law,” he added. He pointed out that many people are not punished after committing cybercrimes, because there has been no legal text criminalizing their actions, and he stressed the need to address this phenomenon. “Several Gulf countries, such as the United Arab Emirates and Qatar, promulgated laws to face cybercrimes years ago,” he told Al-Monitor.

Shadid further noted that there will certainly be obstacles as the law is implemented, especially since it will apply to new and untested situations. Criminals may flee before they can be prosecuted, and even afterward, and "there is no cooperation between the Palestinian Authority and Israel for the extradition of wanted persons who have been convicted of criminal charges." Also, cybercrimes can be perpetrated from anywhere.