Fake social media accounts have been spreading misinformation and leaked documents for political and criminal ends. 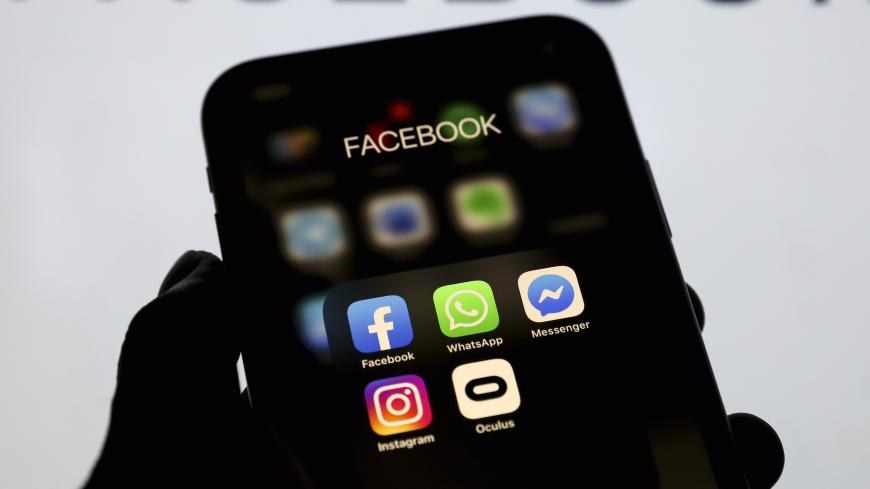 The logos of social media applications WhatsApp, Instagram, Messenger and Oculus are seen on a mobile phone as the Facebook logo is seen behind on a screen, in Ankara, Turkey, May 4, 2020. - Hakan Nural/Anadolu Agency via Getty Images

The Iraqi National Intelligence Service announced May 11 that an individual who was impersonating social activist Haida al-Amiri and blackmailing businessmen and prominent figures has been arrested in Lebanon.

Haida al-Amiri's is one of hundreds of fake social media accounts impersonating political figures in Iraq. Extensive electronic networks are paid to promote the funding party and distorting the image of its opponents to topple them politically and electorally. On April 28, activists and protesters received threatening messages via hundreds of fake accounts. Minister of Finance Ali Allawi denied having a Twitter account May 16 after a fake one was discovered to be posting in his name.

On May 7, the Ministry of Interior announced it had closed 15 fake accounts for Iraqi Airways that were posting false timetables for flights. Back in Septemer 2019, Facebook announced it was deleting around 500 fake pages and accounts created in Iraq and Ukraine.

The Haida al-Amiri impostor told Al-Monitor over the phone from Lebanon, “I am banned from writing, posting or making statements, except with the approval of the Lebanese authorities.”

Parliament member Falah al-Khafaji told Al-Monitor, “There has been a significant spread of social media pages and accounts [that] leak documents from state departments to trick politicians and officials. Blackmail of citizens and officials has also been on the rise.” Khafaji said that this phenomenon prompted a specialized parliamentary committee to coordinate with the Ministry of Communications. He admitted how difficult it was to fight electronic blackmail.

Researcher and former editor-in-chief of the Assabah newspaper Abbas Abboud told Al-Monitor that the fake accounts are being exploited for political ends. He called on the Iraqi government to “promote freedom of expression, which guarantees a person’s right to express himself using his own name or to publish critical ideas, as long as they are in line with the ethics of journalistic work and do not cause moral or psychological harm to others.”

Abboud said, “It is very easy to create fake pages and accounts in Iraq and even to obtain official documents under impostor names due to the rampant corruption and bribery.” He called on “governmental and political figures to verify Facebook, Twitter and other social media accounts and pages.”

Media professor at the University of Baghdad Mohammad Fallahi told Al-Monitor, “The chaotic reality of [online] publishing allows people to post through fake accounts and take advantage of the digital environment to implement their schemes, in the absence of deterrent laws.”

He explained, “The pending cybercrime bill has its shortfalls because it treats providing information as a crime.”

The problem is affecting the work of many institutions and ministries. On May 9, the Iraqi Ministry of Defense had to explain that Defense Minister Gomaa Enad had been impersonated on social media. Iraq’s Central Bank warned citizens on May 5 that there are fake social media accounts with its name and logo spreading false information and news about loans for ministry staff.

Member of the board of trustees of the National Communications and Media Commission of Iraq Salem Mashkour told Al-Monitor about official efforts to pursue the owners of offensive pages that have tarnished reputations, been used to blackmail businessmen and politicians and allegedly led to murder. He asserted, “Iraq needs to develop special monitoring departments with high-tech skills. It also needs direct communication channels with the administrations of these sites to organize shutting down offensive pages.”

He said, “The blackmailers receive information from collaborators in Iraq who are often in the state apparatus. The pursuit should include [foreign] collaborators whose involvement would explain the wide-scale opposition to the cybercrime law in several countries.” Because the cybercrime bill has not been passed yet, he added, the judicial authorities have to rely on the current penal code in prosecuting the blackmailers.

National Wisdom Movement senior Baligh Abu Kalal acknowledged the impact of electronic fraud on the political scene in Iraq, but warned against jeopardizing freedom of speech because it is protected by the Iraqi Constitution. However, people must not abuse this freedom for political extortion, he told Al-Monitor, noting, “Maintaining anonymity is a personal right, no doubt, but political or moral blackmail under this anonymity is absolutely not part of the freedom of speech.”

Former judge Ali al-Tamimi told Al-Monitor that fake accounts and pages on social media are considered crimes in the Iraqi Penal Code, per Articles 333 to 336. He noted that social media platforms like Facebook and Twitter are subject to the law. However, influential political figures are spending money to fight their rivals by leaking official documents or spreading fabricated news.