Sexual harassment in Egypt has moved from the streets to the Internet, as more women and men are being harassed online. 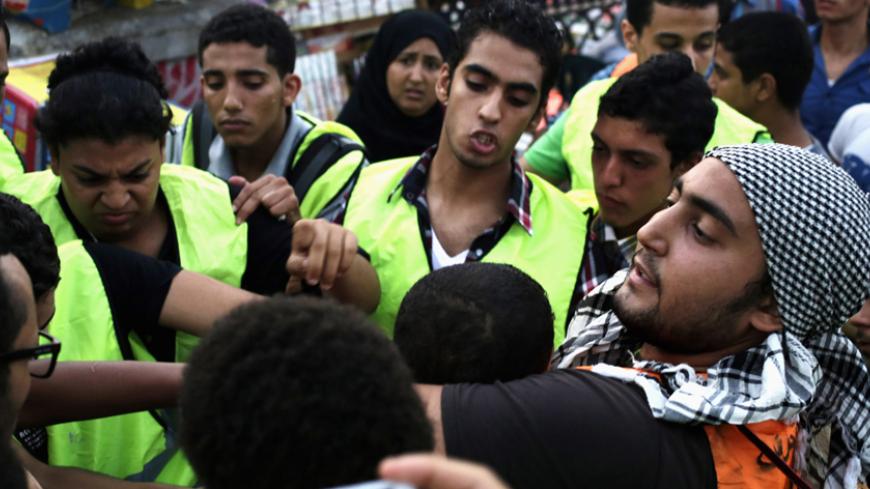 Volunteers from an anti-harassment group called "Harassing the Harasser" detain a young man after a girl claimed that he was sexually harassing her, during Eid al-Fitr celebrations in central Cairo, July 28, 2014. - REUTERS/Asmaa Waguih

CAIRO — Thanks to the widespread use of mobile devices and social media, sexual harassment is no longer confined to a direct physical encounter between the harasser and the victim. Through a phenomenon called "cyber sexual harassment," the harasser can now reach potential victims in their homes.

Cyber sexual harassment is defined as the use of electronic means of communication to send messages or images, many times of a sexual nature, to threaten or insult the recipient. Sometimes, the harasser will threaten to use and manipulate the recipient's photos and share them online, or even use their photos without their consent.

Egyptian women facing cyber sexual harassment are now organizing against the phenomenon. One woman who was on the receiving end of such harassment told Al-Monitor, on condition of anonymity, that she had received "messages from harassers including immoral expressions. Sometimes, the harasser would share content from my Facebook page, along with humiliating and offensive comments."

She added, "I dedicated an album on my Facebook page to this cause under the name 'Expose Facebook Harassers!' The album contains screenshots of the messages that the harasser was sending me, or insulting comments on my page including offensive words." The album contains photos documenting various instances of harassment faced by this woman and her friends.

She hoped that this method of fighting back against online harassers who hide behind keyboards would spread among her friends. Meanwhile, the Egyptian public is working to counter the phenomenon of cyber harassment by making public the messages they receive from harassers, in an attempt to shame them and raise awareness among women. In their view, this form of harassment is no less dangerous than street harassment. Women are thus encouraged to tarnish the reputation of their cyber harasser — a method that has received broad support among the source's peers, both male and female.

"What is difficult about facing such harassment," said the source, "is that a large number of accounts of Facebook harassers are fake and are closed a while later. The harassers have several accounts that they use to practice cyber sexual harassment."

The Facebook page "Al-Araby al-Marid," (Sick Arab) attempts to expose sexual harassers by posting their comments and messages, as well as their Facebook friend requests that include sexual offers. Many women who have been sexually harassed online use this page as an outlet.

Writer Jihad al-Tabii's book, “Mozza Inbox” — with "mozza" meaning sexy — depicts the cyber harassment experienced by her and her friends.

“While girls refrain from taking to the streets, and hide their beauty with unattractive clothes, they are now facing harassment while at home through their phones. Cyber sexual harassment is not only targeting girls but also guys, albeit in smaller numbers. The harasser usually seeks to get a wife, relationship or paid sexual affairs,” she told Al-Monitor.

“Many people don’t consider offensive messages, words and pictures sent to girls on social media as harassment. Complaints against these messages are entertaining somehow, and some people blame girls who post their personal photos on social media and are available online until late hours for the harassment they face. It is as though the Internet has become the street, and girls surfing it are subject to the harasser’s desires, doubts and invasion of their freedom,” Tabii said.

On why she decided to write "Mozza Inbox," Tabii said, “Many books that tackle harassment discuss it from a scientific point of view and address researchers and people interested in the topic. But, in my book, I talk about cyber sexual harassment sarcastically, and I illustrate my ideas with real life stories that my friends from both genders and I have lived. The book lures young men and women who care about this issue, and that is why I chose a word ["mozza"] that they often use in their online chats as a title.”

Monica Ibrahim is the communications manager of the Harass Map initiative, which was established in December 2010 to mobilize Egyptians to reject sexual harassment. She talked to Al-Monitor about the efforts of civil society organizations to face cyber sexual harassment. The Harass Map initiative seeks to start conversations on the issue of harassment and encourage people to stop making excuses for the harassers.

“In addition to focusing on raising awareness and facing harassment that girls undergo on Egyptian streets, we have taken interest in cyber sexual harassment and dedicated a week to receive Facebook messages and photos sent to girls containing sexual demands and insinuations. We posted some on our Facebook page, while others weren’t posted as they included highly insulting photos and words,” Ibrahim said.

Ibrahim added that Harass Map offers women judicial support in case they decide to pursue legal action against their harasser.

Sexual harassment is no longer restricted to the streets. It now threatens women in the comfort of their homes as they browse social media sites. What’s more, the phenomenon is no longer restricted to women — it now affects men, albeit not as frequently. With the increase in cyber sexual harassment cases, society must confront these perpetrators who hide behind their screens.