The ruling issued by an Egyptian court sentencing two TikTok activists to prison sparked controversy over the status of the electronic application in the country, amid parliamentary demands to censor its content. 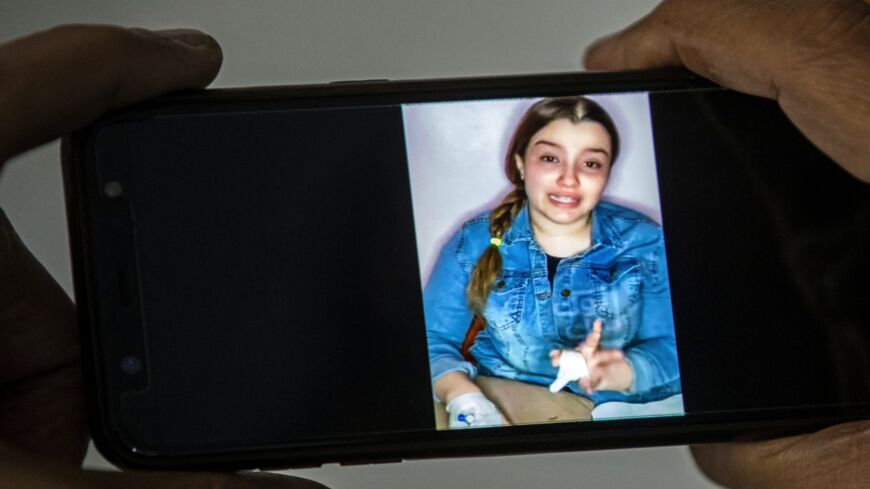 A man watches a video posted by Egyptian Tiktok influencer Haneen Hossam on her social media pleading with the authorities to drop the charges against her, in Cairo on June 23, 2021. The 19-year-old was arrested last year and sentenced to two years for "attacking society's values" in videos published on TikTok. - KHALED DESOUKI/AFP via Getty Images

An Egyptian court on June 20 slapped two TikTok female activists with jail sentences amid calls for censorship of the video-sharing application’s content.

The court accused Hossam of encouraging young girls and teenagers “to post videos inciting immorality, escaping from justice, and encrypting their phones and accounts.” It came after Hossam posted a video back in April 2020 calling on girls to work with her through an agency she formed through another video-sharing platform, Likee, telling them they could make between $36 to $30,000 by broadcasting videos on it.

On June 22, the court decided to retry Hossam.

An Egyptian judicial source said in a brief statement to Al-Monitor, “According to Egyptian law, the sentence issued against Hossam was overturned by her arrest, provided that she be retried by attending the court sessions.”

In related context, Egyptian parliament member Walaa al-Tamami told Al-Monitor over the phone she submitted to parliament a request for a briefing earlier this month to discuss the role of the Egyptian Ministry of Communications and security services in censoring the content published on video-sharing applications on social media, most notably TikTok and Likee. She urged parliament for solutions to confront the moral chaos on such applications.

Tamami said, “The request for briefing aims to discuss the dangers of TikTok to Egyptian society in light of the recent spread of its use. This is not related to the verdict against the two girls, Hossam and Adham. It is a coincidence.”

In April 2020, a report by the National Telecommunications Regulatory Authority in Egypt revealed a huge increase in the use of internet applications during the coronavirus lockdown, especially the TikTok app. The report noted that TikTok is a favorite destination for mobile phone users, and the percentage of use of this application has increased by 194% compared to the period before the lockdown.

Tamami said, “The content shown on the TikTok application, which is the most popular in video applications, contradicts the morals of Egyptian society and has many negatives and psychological effects on society as a whole, not only on users. It leads to social isolation and depression of its users in many cases.”

She said “a number of TikTok users have been exploiting this app in a manner contrary to public morals amid the lack of censorship over it to publish pornographic clips and videos that are not in line with Egyptian culture, and sometimes caused the death of children and youths.”

Tamami urged more stringent restrictions on individual access to this application and constant censorship over its content.

However, Walid Hajjaj, an expert and researcher in the field of information security, told Al-Monitor, “It is very difficult to control the content published on TikTok through government censorship. Rather, in my opinion, parents should monitor what their children are being exposed to and the applications they follow on their phones. The culture of dealing with technology is not widespread in Egypt, with users ignorant of the penalties contained in the Egyptian law regarding electronic crimes.”

Hajjaj added, “The state's intervention to ban or block the TikTok application will not be the solution, because there are many technological tools to bypass this ban. Canceling the application itself is only done through the platform that lists the application, such as Google Play on Android phones, for example.”

He argued that in general the intervention of Egyptian authorities to block TikTok will not be 100% effective. “TikTok is one of the applications that has sparked controversy in the recent period in Egypt,” he said. “TikTok users’ privacy can be hacked. This has prompted the United States to briefly ban the application, but it removed the ban and obliged TikTok to modify some privacy matters in proportion to US laws.”

On Sept. 18, 2020, the US Department of Commerce announced the ban on the Chinese-owned mobile apps WeChat and TikTok from US app stores due to “national security” risks. In October of the same year, a US court reversed the ban.

Similarly, in late March, an Egyptian court rejected a lawsuit that demanded TikTok be blocked in Egypt, accusing it of “violating the constitution, the law, and all religious, moral and social values.”

In turn, Hani Kamel, content operation director for TikTok in the Middle East and North Africa, said in statements to Vetogate news website on June 23, “Our community policy prohibits scenes of nudity, violence, profanity, drugs and other indecent scenes.”

He explained there are several stages to censor content. “This includes use of artificial intelligence and a working group of specialists in each region, including the Middle East, to delete any video that violates the community policy.”