The continued detention of Haneen Hossam, a TikTok influencer, on a new charge of "human trafficking" has raised concern among rights advocates, bringing Egypt's human rights under scrutiny once again. 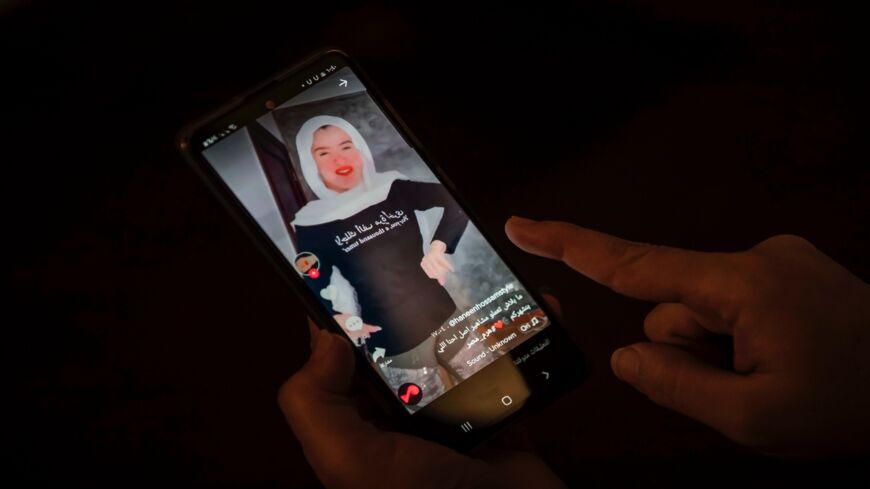 A woman watches a video of Egyptian influencer Haneen Hossam, who was sentenced to two years in prison on charges of violating public morals, on the video-sharing app TikTok in Egypt's capital, Cairo, on July 28, 2020. - KHALED DESOUKI/AFP via Getty Images

A little over three months after her acquittal by a Cairo Economic Appeals Court in a high profile morality case, TikTok influencer Haneen Hossam remains behind bars pending an investigation over "human trafficking" charges in a new case.

Hossam, a Cairo University student who had 1.2 million followers on the video-sharing social media platform, was ordered released on a bail of 5,000 Egyptian pounds (about $319) in January after a Cairo Appeals Court overturned her previous two-year sentence on the charge of "violating family values" and running social media accounts to commit her "crimes."  But two days after her acquittal, prosecutors ordered her detained once again on a new and even more serious charge of human trafficking.

Hossam was arrested on April 21 last year along with four other young women, including Mawada El Adham, another prominent TikTok influencer who has remained in jail since and, like Hossam, also faces charges of human trafficking. The "TikTok girls," as they have been referred to by some media, had gained a massive following by publishing short video clips on the China-based social networking app that showed them lip-syncing to popular Arabic songs and dancing.

Their detention came amid a wave of arrests and detentions targeting female social media influencers, singers and artists, including Egyptian belly dancer Sama El Masry who was also sentenced to three years in prison in June after a Cairo Misdemeanor Court found her guilty of "inciting debauchery." The charge was in relation to "suggestive" photographs she published on her social media accounts that portrayed her in "revealing clothes," according to prosecutors.

Hossam's "incitement of immorality" charge in the first case was related to an online video clip she published days before her arrest and which was deemed "indecent" by prosecutors. The video showed the veiled 20-year-old lip-syncing to an Arabic song while making expressive hand gestures and facial expressions to emphasize the lyrics. Some days before her arrest, Hossam had also called on young women to join her in making money online by building social media followings.

El Adham, who had published photos and videos that prosecutors interpreted as "lewd," also faced similar charges of promoting debauchery. In July, both El Adham and Hossam were sentenced to two years in prison each and fined 300,000 Egyptian pounds (around $19,000) by an Economic Misdemeanor Court. Although their sentences were overturned by an Appeals Court in late January, the young women were ordered detained once again pending an investigation in the human trafficking case.

Under Egypt's 2018 Cybercrime Law, charges can be brought against anyone who publishes content that violates alleged family values; the crime is punishable by a jail sentence of at least six months and a fine of between 50,000 and 100,000 Egyptian pounds ($3,188 and $6,375). Some rights advocates, such as Nehad Abul Komsan, head of the Egyptian Center for Women's Rights, have denounced the law as "erroneous" and called for it to be abolished.

The new accusations leveled against the two defendants are related to their alleged encouragement of other young women to join them in making money from TikTok by building friendships with strangers, a charge Hossam has denied.

The so-called TikTok case has sparked controversy on Egyptian social media platforms, with some users in the conservative, patriarchal society cheering the decision to detain the girls so as to deter other women from similar "indecent" behavior. Others viewed the girls' detention as a sign of gender discrimination and said the move was a warning to all women who dare challenge social norms.

Hossam's case has also served to bring attention to what some Western countries — including the United States — have recently described as "widespread human rights violations" committed by Egyptian authorities. A joint statement signed by 31 countries at the UN Human Rights Council in Geneva last month called on Egypt "to end the prosecution of activists, journalists and perceived political opponents under counterterrorism laws, and to release them unconditionally." The Egyptian Foreign Ministry, however, rejected the statement, saying it contained baseless and "inaccurate" information.

The young women's detention has also raised concern among human rights advocates and groups. Amnesty International denounced the move as "a sign of new repressive tactics to control cyberspace."

Mohamed Lotfy, founder and executive director of the Egyptian Commission for Rights and Freedoms, also criticized Hussam's re-arrest, insisting the accusations leveled against her by a prosecutor were "false." He told Al-Monitor she was fined after her conviction on the charge of violating family values and has now had her detention renewed for "daring to exercise her basic right of freedom of expression."

"Like many social media influencers around the globe, she used TikTok to speak her mind, express herself and encourage other girls to make money from the popular social platform," he said.

"Prosecutors have taken it upon themselves to be the guardians of morality and family values, but no one has ever defined these values," he added.

Bahey el-Din Hassan, a human rights defender and director of the Cairo Institute for Human Rights Studies, sees Hossam's continued detention as part of an ongoing security crackdown that has targeted Muslim Brotherhood supporters and sympathizers as well as secular activists, journalists, artists and members of the LGBT community. Tens of thousands of political opponents languish in jails in Egypt, many of them on what rights groups have described as "trumped-up" or "politically motivated" charges. President Abdel Fattah al-Sisi denies Egypt holds any political prisoners, insisting that only those who have committed crimes are in jail.

"President Sisi has waged war on the human rights concept itself, building a wall between Egyptians and their basic rights and freedoms under the guise of protecting family values," Hassan told Al-Monitor. He argued that Hossam's detention was an attempt by the authorities to woo ultra-conservatives in the society. Furthermore, he recalled that Sisi had repeatedly stated that "'Western' human rights don't apply in Egypt."

Sisi has argued that "domestic and regional conditions make it difficult to apply the same rules regarding civil liberties," in reference to Egypt's ongoing war against terrorism in the northern Sinai Peninsula. His counterterrorism policies have been slammed by Human Rights Watch, which said the policies "ignored and violated civilians' rights." The rights watchdog has also condemned the evictions of Sinai residents and the massive demolitions of their homes by the Egyptian army as a violation of international humanitarian laws, describing them as being tantamount to war crimes.

Hundreds of forced disappearances and a "chilling rise" in executions in Egypt in recent months have earned the Sisi government further condemnation from rights groups and critics. At least 57 people were executed by authorities in October and November alone, which is double the number of people executed throughout 2019, according to Amnesty International. At least 15 of those executed had been sentenced to death in "grossly unfair trials marred by forced confessions" and other rights violations including torture, the rights watchdog said.

The recent UN Human Rights Council statement on Egypt has urged Cairo to "guarantee space for civil society — including human rights defenders — to work without fear of intimidation, harassment, arrest, detention or any other form of reprisal."

Reacting to the Western backlash, Egypt's Permanent Mission at the UN released a statement expressing its "regret" over what it called the UN Human Rights Council's politicization and escalation of (its human rights) situation" and "the exploitation of the Council by some countries that believe they have the right to evaluate others as a  cover-up for their own rights abuses."

The state's angry response to the UN Human Rights Council statement clearly indicates there will be no easing up on the repression in Egypt anytime soon. It also does not auger well for Hossam and the thousands of other detainees locked up in Egypt's prisons, many of whom are being denied their constitutional right to due process.