The Filmmaker Who Wasn't

Many media accounts have named "Sam Bacile" as the "filmmaker" behind an anti-Islamic video that has sparked outrage in the Mideast. But the name appears to be phony, and Laura Rozen reveals details about people who were involved with the video. 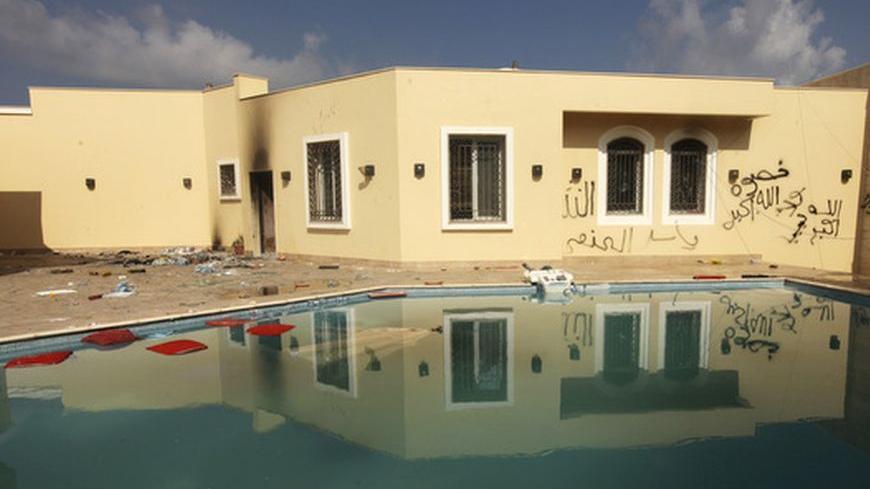 An exterior view of the US consulate, which was attacked and set on fire by gunmen in Benghazi on September 12, 2012. - REUTERS/Esam Al-Fetori

The man claiming to be the writer, director and producer of the anti-Islam film that reportedly spurred deadly anti-American protests in Libya and Cairo Tuesday appeared on Wednesday not to exist — at least, not under the name, nationality, origins, religion or profession he claims.

“Sam Bacile” told The Wall Street Journal and The Associated Press in interviews Tuesday that he was an Israeli-born Southern California-based real estate developer, who received $5 million from “100 Jewish donors” to finance his anti-Islam film, Innocence of Muslims,  “Islam is a cancer,” he told the Journal and AP.

But several elements of “Bacile’s” story appeared on further examination Wednesday to be phony. There are, for instance, no California real estate license records  for anyone with the last name Bacile.  And the fact that Bacile said precisely “100 Jewish” donors financed the project also seemed dubious. Israeli officials, contacted by Al-Monitor, declined to say if Bacile was an Israeli citizen, demurring in part because of uncertainty over whether that was a real name.

Then there were other clues that his identity was fake. Steven A. Klein, a Hemet, Calif.-based “consultant” to the film and self-styled terror expert, told the AP Wednesday that Bacile had family members in Egypt. With reports suggesting there have been fewer than 100 Jews living in Egypt since 2004, it did not seem that Bacile's Egyptian Jewish family members would be hard to locate — or easy to protect.

“Sam Bacile” also had almost no presence on the Internet until someone with that handle posted an Arabic-language translation of a 13-minute trailer for the film to YouTube on Monday. Riots reportedly spurred in part by outrage over the trailer, that portrays the prophet Mohammed as a philanderer who advocates child abuse, led to attacks that killed four US diplomatic personnel in Benghazi, Libya Tuesday, including US ambassador Chris Stevens.

Klein, in an interview with The Atlantic’s Jeff Goldberg on Wednesday, admitted that “Sam Bacile” is a pseudonym, and that Bacile is neither Israeli nor Jewish. Klein further claimed to Goldberg that he didn’t know Bacile’s real name, didn’t know his origin, and that he had only met him in total for one hour.

So who is Bacile? And who is Steve Klein?

A trace of the cell phone number used by “Sam Bacile” led the AP to a man named Nakoula Basseley Nakoula, outside Los Angeles Wednesday. Nakoula, of Egyptian background, acknowledged to the AP that he had been a manager for the company which produced the video, but denied he directed it. Court records show that Nakoula was convicted of federal bank fraud in 2010 and sentenced to 21 months in prison. Federal prison records show that Nakoula was released from federal prison in June 2011.

The AP said it had originally been given Bacile's cell phone by Morris Sadek, an Egyptian-American Copt and anti-Islamic activist who is a principal with the National American Coptic Assembly. Coptic groups sharply distanced themselves from Sadek and the film, and expressed sorrow for the violence in Egypt and Libya.

E-mails to Sadek and a message left by Al-Monitor at the National American Coptic Assembly offices in Chantilly, Va., were not immediately returned. Efforts by Al-Monitor to reach Klein Wednesday were also unsuccessful.

Klein describes himself in the bio of a self-published 2010 work, Is Islam Compatible with The Constitution, as a Vietnam vet who since 9/11 has used contacts in the Arabic Christian diaspora community as translators as he has scoured Southern California mosques hunting for terrorist cells. “With 9/11, 2001 I immersed myself with Islam in America; went to every major Mosque in SoCal with Arabic speaking Christians as translators and uncovered useful information about many Mosques being the headquarters of terrorism in America,” Klein wrote.

In a 2007 interview, Klein said that through a group that he had founded, called Middle Eastern Experts’ Team (MEET) “and his contacts with the Coptic community he has been asked to give his insights to the FBI and the U.S. Marine Corps.”

An examination of California public records by Al-Monitor shows that in July 2011, Klein registered a group called the Concerned Citizens for the First Amendment (CCFA) as a California business. The group has reportedly staged a few protests in front of Southern California high schools in 2011 to express opposition to mosques.

Ahead of one such planned school protest, Klein sent out an e-mail saying “he expects the outreach will involve three or four people handing out fliers on the First Amendment and its limitations,” the Californian newspaper reported in January 2011. “The fliers will contain links to YouTube clips that expound on various constitutional interpretations, including those dealing with religious matters.”

"Islam flows from the behavior of Mohammed which never supported any of our constitutional freedoms such as our First Amendment,” Klein further wrote in the email announcing the protest, the Californian wrote.

Notably, a July 2011 letter from Klein on behalf of the Concerned Citizens for the First Amendment to the Los Angeles City Attorney was posted to the website for the National American Coptic Assembly — the group headed by Sadek.

Klein formally registered Concerned Citizens for the First Amendment (CCFA) as a corporate entity with the State of California in July 2011. An examination of public records by Al-Monitor shows.

The film that was later modified into the anti-Islam video trailer was also shot in July 2011, according to a Craigslist casting call obtained by Gawker. Actors in the film told Gawker they were deceived about what it was and vowed to sue those who made the video.

Notable, as well, is that Klein’s group, Concerned Citizens for the First Amendment, is registered in California as a corporate business, not as a non-profit or advocacy group, as its name would suggest. Klein registered the corporation at a Murrieta, Calif., address, which public records show as the address and suite number of a law firm called Southwick & Biondi.
Glen Biondi, a lawyer previously associated with the firm,  told Al-Monitor Wednesday, that Klein was his client and that he had drawn up the articles of incorporation for Concerned Citizens for the First Amendment. “I did the articles for him, the by-laws,” Biondi told Al-Monitor.
Was Concerned Citizens for the First Amendment incorporated last year to produce the film? “I have no idea,” Biondi said. “It was set up as a corporation.”
He declined to answer more questions about why an entity that sounded like an advocacy group was set up as a for-profit corporation, citing attorney-client privilege. Biondi, who now serves as president of Blondi Realty and Blondi Law Firm, said he had never heard of "Sam Bacile.”