The video was a catalyst for the attack on the US Consulate on Sept. 11, 2012, which killed Ambassador Christopher Stevens and three others. 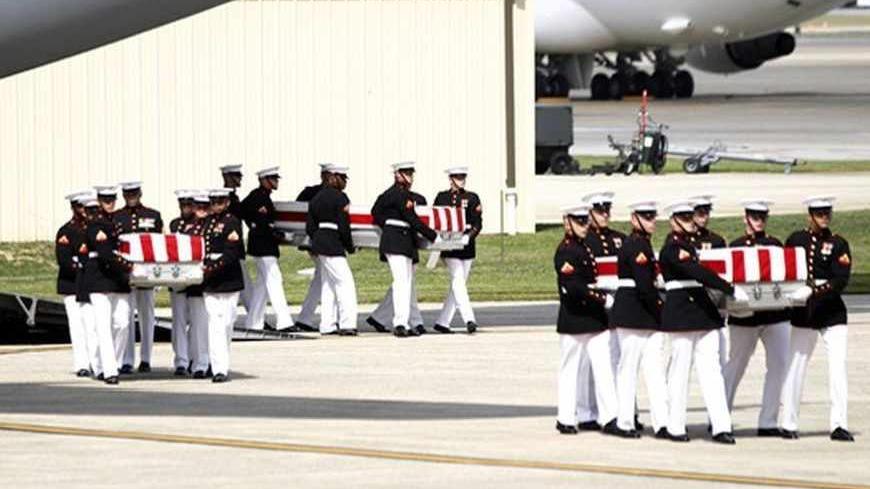 The remains of US ambassador Christopher Stevens and three other Americans killed in an attack in Libya are taken off a transport aircraft during a return of remains ceremony at Andrews Air Force Base near Washington, Sept. 14, 2012. - REUTERS/Jason Reed
John Rosenthal
July 2, 2013

US President Barack Obama’s appointment of Susan Rice as his new national security adviser has added fuel to the fire of a controversy over Rice’s role as US ambassador to the UN in communicating administration “talking points” in the aftermath of the Sep. 11, 2012, attack on the US mission in Benghazi, Libya. Five days after the attack, Rice famously went  on Sunday talk shows and suggested that the attack had been a “spontaneous” response to an anti-Islam YouTube video “Innocence of Muslims” — a matter of a demonstration that “spun out of control.”

But in a news conference held three weeks later, on Oct. 9, the State Department divulged that there was “nothing unusual” going on outside the compound on the day of the attack. Moreover, testifying before the House Oversight Committee in May, Gregory Hicks, the deputy to slain US Ambassador Christopher Stevens, said that he was on the phone with Stevens as the attack was underway, and his boss made no mention of any protest that preceded it. If there had been any protest, “I’m confident that Ambassador Stevens would have reported [it],” Hicks added. Similarly, the Accountability Review Board convened by the State Department under the chairmanship of former UN Ambassador Thomas Pickering concluded that no protest took place prior to the attack. It should be noted, however, that the Pickering Report also makes repeated reference to a “crowd” assembled near or even inside the compound, suggesting thereby that more people were present than just the armed assailants.

There appears, then, to have been no demonstration. Nonetheless, Rice had it half right. The anti-Islam video did indeed play a role. Examination of contemporaneous chatter on Libyan websites shows that locals really were in an uproar about the video in both the run-up to and immediate aftermath of the Benghazi attack. This finding is all the more significant inasmuch as the chatter in question comes from precisely the same extremist milieu as the presumed assailants. In the hours immediately preceding the attack, local Islamists were calling on their brethren to “do something” in response to the video. From both the source and tenor of these appeals, it is clear that they meant something more emphatic than just a peaceful demonstration.

Early versions of the “talking points” drafted by the CIA on Sep. 14, 2012, referenced indications that Islamic extremists were involved in the attack on the Benghazi mission and potential links to Ansar al-Sharia, a local al-Qaeda-affiliated militia. As explained by the Interim Progress Report issued by the chairs of five House committees, these points were omitted from the final version used by Rice.

Ansar al-Sharia appears to have maintained no less than three Facebook pages before the attack occurred. Unfortunately, all three disappeared from the Web shortly thereafter. But a kindred Facebook page, that of the Libyan Ansar Minbar, or “supporters platform,” remains online and provides an important window into the agitation embroiling the local Islamist scene around the time of the attack.

As numerous features of the site make clear, the supporters mentioned in the page’s name are none other than the “supporters of the Sharia” — that is, Ansar al-Sharia. The Ansar Minbar page is thus conceived as a kind of platform or forum for Ansar al-Sharia. In the current Libyan context, the latter term needs to be understood both in the narrow sense of the particular militia that goes by this name and in the broader sense of all those who sympathize with its aims, including many members of other militias.

The motto of the Ansar Minbar is “Together toward a better life under the auspices of Islamic Sharia.” Similar to Ansar al-Sharia, the Ansar Minbar features both an open Quran and the classical black jihadist flag in its logo. In the banner of its Facebook page, it also features a black map of Libya imprinted with the design of what is commonly known as the al-Qaeda flag — a variant of the classical black jihadist flag.

Timeline entries on the page show that in the early evening of Sep. 11, 2012, Ansar Minbar was closely following developments in Cairo, where a crowd of thousands had converged upon the US Embassy, ostensibly to protest a US-made film that insulted the Prophet Muhammad.

At 6:04 p.m., the page administrator posted a photo of an al-Qaeda flag being attached to a flagpole at the embassy in Cairo. The accompanying text read: "Egypt urgent. Demonstrators take down the American flag and raise in its place the 'There is no God but God' flag. And us, what are we doing in Libya???"

Six minutes later, the administrator posted another photo, this one showing the al-Qaeda flag now flying in front of the embassy. The new, more insistent, message enjoins, "God is great, o brothers! The 'There is no God but God' flag rises above the American Embassy in Cairo. And what, brothers, men of Libya, are you doing??!! Expel them from our land, we do not want one infidel of them …"

Just three hours later, at 9:11 p.m., a newsflash on libya-s.net, an Ansar Minbar online forum, announced that the US mission was being attacked. Note that this puts the start of the attack around a half hour earlier than the official US account. The post identifies members of Ansar al-Sharia as the assailants.

At 1:20 a.m. on Sep. 12, a new photograph appeared on the Ansar Minbar Facebook page under the heading “Photographs [sic] of the Benghazi demonstrations.” But rather than any demonstration, the picture shows just a single masked “protester” burning an American flag.

Oddly enough, however, demonstrations "in support of the Prophet" did occur in both Benghazi and nearby Derna in the following days. The Derna demonstration took place on Sep. 12. The so-called Hemam Media Institute (HEMM) posted photos of the demonstration on its Facebook page. HEMM advertises itself as “the first Islamic media organization in Libya,” and features the black jihadist flag in its logo. A message posted by HEMM on libya-s.net specifies that the Sep. 12 demonstration was called, "… in support of the Messenger of God and in response to the insulting film, and in support of the strike on the American Embassy in Benghazi."

Captions on the photos likewise refer to “support” for the attack as well as to the “victory” of the Prophet Muhammad.

Demonstration in support of the Prophet Muhammad and the attack on the US mission, Derna, Sept. 12, 2012

Demonstration in support of the Prophet Muhammad and the attack on the US mission, Derna, Sept. 12, 2012

Two days later, the Ansar Minbar posted photos of another demonstration in support of the Prophet and his “victory.” This took place on the Benghazi waterfront.

Moreover, the Ansar Minbar and HEMM are not the only local sources to have viewed the attack through the prism of the “anti-Islam film.” So, too, did none other than the February 17 Martyrs Brigade.

The February 17 Martyrs Brigade is one of the most important government-sponsored militias in eastern Libya. Members of the brigade were employed as a guard unit at the US mission in Benghazi on Sep. 11, 2012. The brigade is openly sympathetic to Ansar al-Sharia.

In an “urgent” statement posted on a brigade Facebook page at 11:31 p.m. on the very night of the attack, the brigade, in effect, confirmed reports that its men stood down during the attack.

The statement explicitly refers to an “insult” to the Prophet Muhammad. It reads in part: "The February 17 Martyrs Brigade denies categorically the occurrence of any confrontation between it and the young men who overran the embassy jealously protecting our noble Prophet and protesting against the insult to him."

The Obama administration quickly revised its initial assessment of the Benghazi attack and now claims, in harmony with its Republican critics, that the incident was a terrorist attack. It was, in the sense that the perpetrators undoubtedly came from a burgeoning eastern Libyan jihadist milieu whose members make no secret of their allegiance to the program and ideology of al-Qaeda. But this is by no means incompatible with the video having played a role in the run-up to the attack.

The evidence from local sources indicates that Rice was more right than perhaps even she today would be willing to admit. She was not right about the demonstration. There appears not to have been any. Moreover, even if there were some unarmed hangers-on who converged upon the compound, it is beyond doubt that the armed assailants went there with the sole purpose of attacking it. But what brought the militia members out of their homes or barracks at that particular time on that particular night appears to have been none other than the “anti-Islam video.”

*Translations from Arabic by Maureen Millington-Brodie