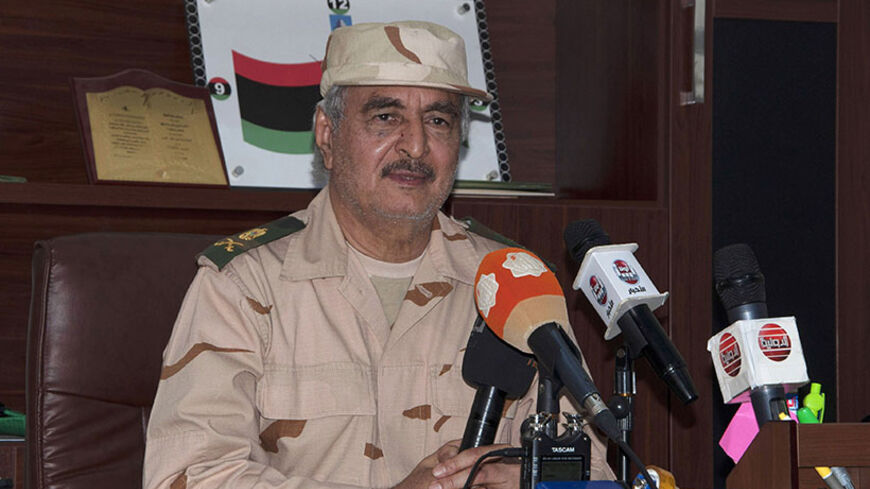 Khalifa Haftar speaks during a news conference after surviving an assassination attempt in Al Marj, east of Benghazi, June 4, 2014. - REUTERS

Khalifa Hifter has done it again, but this time, perhaps a little bit more wisely. Last February, the same man appeared on TV to announce what amounted to a coup d’état, declaring the General National Conference annulled, suspending the government and calling for new elections. But nothing actually happened, and the general disappeared into thin air. He suddenly reappeared on May 16 to launch what he called Operation Dignity to rid Libya of Islamist militias suspected of being behind many assassinations, particularly in Benghazi.

Hifter seems to have learned a lesson from his last attempt, but still misses the point, lacks political vision and is hardly aware of what chaotic Libya needs. When he intelligently declared his "war on terrorism," a catchy slogan domestically and abroad (particularly in Benghazi, where murder is a daily occurrence), he never anticipated the kind of support he would command inside the divided country.

This seems to have caught him off-guard as he failed to offer Libyans any real workable political alternative, like President-elect Abdel Fattah al-Sisi in neighboring Egypt. He also seems to lack effective on-the-ground coordination with his supporters in western Libya, particularly in Tripoli, where he enjoys disorganized support from the strong Zintan militias and wider public applause. Many Libyans are supportive of his objectives, but not necessarily of the man himself, another strong indicator of Libyans' desperation and disappointment.

Operation Dignity attracted many Libyan military units, including some elements of the Benina-based air force, just outside Benghazi. On June 1, helicopters and fighter jets bombed two Islamist camps belonging to the notorious Ansar al-Sharia and the February 17 Revolutionaries in Benghazi. More army units in Tripoli, Tobruk and Sebha rallied behind Operation Dignity, but they are still operating separately with little political and media reach.

Hifter, as a retired military man, knows well that he could be assassinated at any time, and the recent attempt on his life proved that he, like dozens of other retired officers, is a target. For the last two years, Benghazi has been a killing field for both retired and active-duty military, police and security officers. This is why many of his supporters among Libyan intellectuals think he only acted in self defense before it was too late.

Indeed, cities like Benghazi, Derna and Sirte have been either partially or fully taken over by radical Islamist local groups affiliated to al-Qaeda in the Islamic Maghreb (AQIM). On May 27, AQIM’s local affiliate, Ansar al-Sahria, publicly warned Hifter that he is a target for assassination. Hifter and his military supporters also knew that there is no government to protect them in militia-dominated Libya.

Yet it seems Operation Dignity was not a fully developed military operation that could translate its gains into a practical political program to salvage what remained of Libya. Charismatic Hifter’s credentials won't do it, either. He was not given a role when he returned from his Virginia home in the United States to join the rebels in 2011. The Islamist-dominated rebels, who fought against the Moammar Gadhafi regime, knew that he could be a future threat to them just like Gen. Abdul Fatah Younis, whom they killed in July 2011, despite being on the front line leading the fight against Gadhafi. To them, he was a potential competitor once the war was over.

The authorities are aware of who is behind the killings in Benghazi, but none of the successive governments have dared to move for two reasons: a lack of force and a lack of legitimacy. The lack of force has come about because many of the professional army units were purged or unofficially dismissed under the notorious Political Isolation Law or after being accused of fighting for the former regime in the civil war of 2011. Also, those who fought the hardest against the Gadhafi regime were actually either fully organized Islamists, like members of former Libyan Islamic Fighting Group, or individuals with strong Islamist-leaning political views. Add to that the fact that many volunteer anti-regime fighters were recruited on Islamic grounds thanks to over a dozen fatwas issued by prominent Islamic clerics that ruled that fighting the regime was "legitimate jihad" and killing Gadhafi was for the public good.

But Operation Dignity seems to have some positive unintended effects. One such important effect is that Libyans, and indeed the world, saw for the first time on video the leader of terrorist group Ansar al-Sharia when, on May 28, 2014, its top leader Mohamed al-Zawahi appeared on TV issuing his threat to general Hifter.

It also shows for the first time the reach and strength of different terror groups in Libya who have been operating and consolidating their presence without any serious challenge from the weak government. In Sirte, southwest of Benghazi, for example, despite not competing in local council elections, Ansar al-Sharia are responsible for security and dominate daily life. If one needs any kind of official document, such as a birth certificate, one must go the local government office, but if a car is stolen, it is reported to Ansar al-Sharia. In Derna, northeast of Benghazi, the group not only runs the city; but has long imposed its lifestyle edicts on the hopeless residents and banned elections in most parts of the city.

Hifter is clearly doomed, and his war on terror in Libya is bound to fail. It will claim more innocent victims, but not rid Libya or even Benghazi of terrorism. What many dubbed as a Sisi-style coup is simply not working in Libya. The irony is that the West, including the United States, does not seem to be bothered.

What Gadhafi said on TV in March 2011 has now become fact: Islamic terror groups were leading the fight against his regime. No one appeared to listen back then. Actually, Western politicians, including the Americans, accused him of spreading lies to protect himself. Three years on, it appears the man was telling the truth.