The story behind the general who will likely shape Libya's future

Gen. Khalifa Hifter's speculative role in Libya's future is as captivating as his intriguing past. 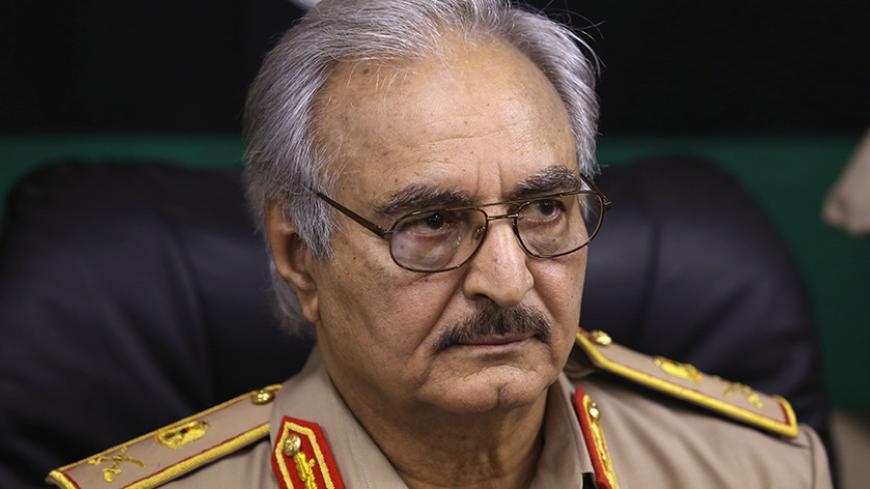 Gen. Khalifa Hifter's star appears to be rising once again in Libya, and it is only a matter of time before we see him become a figurehead in a country that is lacking any but is eager to have one.

His enemies in Misrata and Tripoli have always questioned his motives and intentions, but it remains to be seen if he will be a uniting leader for a fragmented country or a divisive politician pushing Libya toward even more fragmentation.

During March, Hifter almost completely liberated Benghazi and started moving his troops to retake Sirte in western Libya, where the Islamic State (IS) has been in control for almost two years. Hifter's troops are surrounding the city, awaiting his orders to attack IS, which has launched battles west and southwest of the city, taking more territories and small villages such as Abu Grain and Zamzim.

Hifter's declared aim is to liberate Libya from Islamists, but it is unclear what his next step will be if he takes Sirte. The next big city on the way to Tripoli is Misrata, which has the most powerful local militia in Libya. Misrata is already an enemy of Hifter, which means attacking it will trigger longer, more devastating war in the country.

So who is this man who has been on and off the Libyan political scene for the last 40 years, shifting positions as his fortune changed from a Moammar Gadhafi loyalist to a prisoner of war to Gadhafi's sworn enemy and — most recently — as chief of staff of the Libyan army under the internationally recognized government in Tobruk?

Born to a big clan in the even-larger al-Firjan tribe, dominant in both Ajdabiya and Sirte, Hifter was recruited as a young officer by the late Gadhafi to join the Free Unionist Officers movement inspired by Egyptian leader Gamal Abdel Nasser. The movement was secretly founded by Gadhafi in the 1960s and used to topple King Idris I of Libya in September 1969 and take power.

Hifter attained the rank of colonel in 1986 and became the commanding officer of Libyan ground troops in Chad's civil war. He was captured in 1987 when his base was overrun by Chadian forces, and he was taken to Chad. Gadhafi, denying that he had any troops in Chad, disowned Hifter and left him, along with 300 of his troops, at the hands of Chadian authorities. Under pressure from the West, particularly France, which supported counter-Chadian factions, Gadhafi never admitted that he had any troops in Chad.

The United States, having already attempted many times to remove Gadhafi from power — including bombing his residence in April 1986 after accusing him of supporting terrorism — came to Hifter's rescue with the hope of enlisting his aid against Gadhafi.

In return for his freedom from Chadian jail, Hifter was asked to join the newly formed opposition group, the National Front for the Salvation of Libya, which enjoyed US military and financial support. Hifter, already angry from being left hopeless in a Chadian jail, joined the front and was flown into the United States by the Central Intelligence Agency (CIA) with troops willing to join him.

Hifter lived comfortably in Virginia, relatively close to CIA headquarters, from the earlier 1990s to 2011. He apparently even became a US citizen, but he never forgot his grudges against Gadhafi.

It is not clear what kind of relations he had with the CIA. Many aspects of his life in suburban Washington are hard to explain — for example, how he supported himself and his family. It is assumed that he became the CIA's man against Gadhafi. He maintained ties with Libyan opposition groups in exile and organized military opposition to Gadhafi from abroad, but without any success until the revolt against Gadhafi erupted in 2011.

Sensing his time had come to settle scores with Gadhafi, Hifter arrived back in eastern Libya in March 2011 and played a role in leading the rebels fighting the regime under NATO air cover.

After the regime was toppled, Hifter faded into obscurity again, only to surface in October 2012 for a brief time when the new government decided to invade Bani Walid, a town southwest of Tripoli accused of harboring former regime officials. There are no confirmed reports of him taking part in actual fighting.

Hifter disappeared again until February 2014, when he suddenly appeared on TV, making a statement resembling an announcement by a military leader taking over power. In the announcement, he launched "Operation Dignity" against Islamist militias in Benghazi; however, no one took Hifter seriously at the time since he had neither an official military role nor a loyal militia to fight with him. It turned out that he was still preparing his military capabilities.

Hifter again disappeared from the scene, spending the next few months moving between al-Marj and Benghazi and trying to organize former military officers into a fighting force, counting on old loyalties among the remnants of the Libyan army and his tribal connections. He managed to cultivate political support within the internally recognized government based in Tobruk, which named him chief of staff of its infant army in March 2015.

After he gained political and military legitimacy, Hifter concentrated on fighting Islamists in Benghazi, though with little initial success. His most sworn enemy was Ansar al-Sharia, the dominant terror group in Benghazi at the time, which the United States had already declared a terrorist organization after it was accused of killing the US ambassador in 2012.

Hifter relied heavily on his tribal connections in eastern Libya and capitalized on the bad security situation in Benghazi. By May 2015, he believed he had enough force to declare war on terror throughout Libya, not just Benghazi, where hundreds of former security officials, army officers and civil and political activists had been assassinated. In a way he was defending himself since he knew that he could be next on the death list.

His offensive in Benghazi stalled for a while since the army fragments he managed to reorganize were few in numbers and lacked training and equipment. Above all, many former professional officers did not join him because neither his motives nor his objectives were clear.

However, that changed in late 2015 and early this year. In March 2016, Hifter established contact with a group of former professional officers and politicians exiled in Egypt. Al-Monitor has learned that two former high-ranking regime politicians visited him and agreed to provide him with more former army officers with certain know-how, including mine expertise and maintenance technicians for military airplanes.

The agreement included unconditional return for any former official or army officer wishing to return to Libya without being prosecuted or threatened. At least one former high-profile politician has already been welcomed back to Libya. Tyeb al-Safi, a former minister and close aid to Gadhafi, returned to eastern Libya under the protection of his own tribe.

While Hifter's definitive military plans are unknown after Sirte, his political intentions also are not clear. He has repeatedly distanced himself from politics, but his increasing popularity, particularly in eastern Libya, might well develop into a nationwide phenomenom pushing him to take some political role or even run for president in the next elections. In eastern Libya today, Hifter is the de facto chieftain as he tries to extend his leadership role westward. Forces loyal to him already control parts of western and southern Libya.

One thing, however, is certain: Hifter is here to stay, and he will play a role in shaping Libya's political scene within the Government of National Accord and beyond.