Libyan military strongman Khalifa Hifter announced the launch of the long-awaited military operation to take Derna, which is expected to boost his popularity in the country’s upcoming elections. 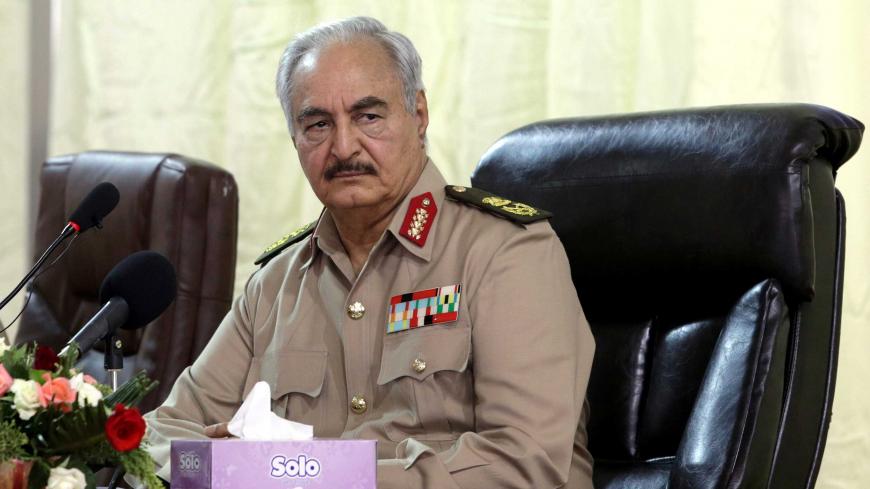 TRIPOLI, Libya — Khalifa Hifter, commander of the self-styled Libyan National Army (LNA), announced May 8 the start of a military operation to take Derna in northeastern Benghazi. This military operation has long been expected, as coastal Derna is the last remaining major town in eastern Libya that has not fallen to Hifter’s forces, which are backed by the country’s Tobruk-based parliament. Libya has two competing governments: one in Tripoli supported by the United Nations and another in Tobruk that lacks international support.

The military operation is seemingly planned to coincide with the anniversary of the Karama Operation (Operation Dignity). Hifter, supported by few military officers, launched the Karama Operation four years ago to “liberate Libya” from terror organizations such as the Shura Council, Ansar al-Sharia and even the Islamic State (IS), which took over much of eastern Libya, including Benghazi, Libya’s second-largest city, and the capital of its eastern region.

In a speech at the start of a military parade in Benghazi, Hifter said, “Zero hour for the liberation of Derna has struck. Our army forces are now targeting their [opponents’] hideouts.” In an apparent attempt to reassure the people that his forces are trying hard to avoid civilian casualties, he added, “We have given instructions to avoid civilian [casualties].”

The LNA is accused of committing indiscriminate slaughter against the civilian population in Derna and in Benghazi before it. One of Hifter’s vocal critics has been Libya’s dismissed mufti, Sadiq al-Ghariani, who called on people to fight against the LNA. Ghariani has long accused Hifter and his supporters of being “counter-revolutionaries” rather than legitimate armed forces supported by the country’s elected parliament.

The International Criminal Court issued an arrest warrant for one of the LNA’s commanders, Col. Mahmoud al-Werfalli, in August 2017, accusing him of war crimes after he appeared in video footage shooting dozens of suspects in public.

Hifter’s military campaign against Derna has so far been limited to encircling the town and engaging positions on its outskirts. The LNA controls all roads leading to Derna, prompting Hifter’s opponents, particularly in western Libya, to accuse him of war crimes by cutting food and medical supplies to the besieged town.

Little information is being shared with the media as to how the operation is proceeding and the numbers of casualties so far, let alone civilian losses, in the town of an estimated 100,000 inhabitants. Al-Monitor spoke to Col. Jamal, who did not reveal his full name because he is not allowed to speak to the media. He explained the situation, saying, “In our previous military operations, we used to share too much with the public that resulted in the enemy knowing about our movements and tactics.”

He added, “That was a lesson we learned the hard way.”

Hifter, who was rumored to have died in Paris while receiving medical treatment only less than a month earlier, is back on the scene with an even stronger determination to deliver on his 2014 promise to rid the country of "terrorist organizations," as he put it. It took the LNA a little over three years to declare victory in Benghazi over half a dozen Islamist organizations that used to control different parts of the city since the fall of the late Moammar Gadhafi regime with NATO help in October 2011.

After many bloody battles to finally take Benghazi and its surrounding areas in July 2017, it was only logical for the strongman of eastern Libya to prepare to take Derna, the last major stronghold in eastern Libya of different Islamist factions including IS and al-Qaeda.

Derna, over the last two decades, had a reputation of being the main supplier of jihadis from Libya and neighboring North African countries to conflict zones, including Iraq after the US invasion in 2003. After the Gadhafi regime’s fall in 2011, the town became a springboard for fighters in eastern Libya and further afield, including Syria after the civil war erupted in March 2011.

Even under Gadhafi, Derna was known to have different Islamic factions operating in secrecy, capitalizing on the town’s difficult mountainous terrain. Libya’s main terror group at the time, the Libyan Islamic Fighting Group, used Derna in the 1990s as its fallback and main military depot to its terror attacks against the Libyan security forces in Benghazi and other cities. Neighboring Egypt launched its own airstrikes against IS training camps and arms depots in Derna in response to the beheading of 21 Egyptian Christians by IS in Sirte in February 2015.

If and when the LNA takes full control of Derna — which is only a matter of time — Hifter will emerge even stronger than he is now. Such military victory will only widen his public support and that of his politicians’ supporters who are gearing up for the next elections. This development will definitely play a role in the upcoming elections proposed by the UN for the divided country sometime this year.

However, it remains to be seen how the battle for Derna will proceed and how long it will last. Based on the fact that different terror groups, including IS, have long entrenched themselves inside Derna, there is every indication that it will be a bloody and protracted battle that could delay elections themselves. The Islamic holy month of Ramadan starts May 16, during which fighting is strictly prohibited, but it is unlikely that it will deter the LNA after such a long wait.

In his speech, Hifter said, “The peace efforts in Derna have reached a dead end,” indicating that his forces will stop at nothing.