On the third anniversary of Operation Dignity to retake Benghazi from Islamist control, Gen. Khalifa Hifter has become a major political player, but his ultimate goals remain unknown. 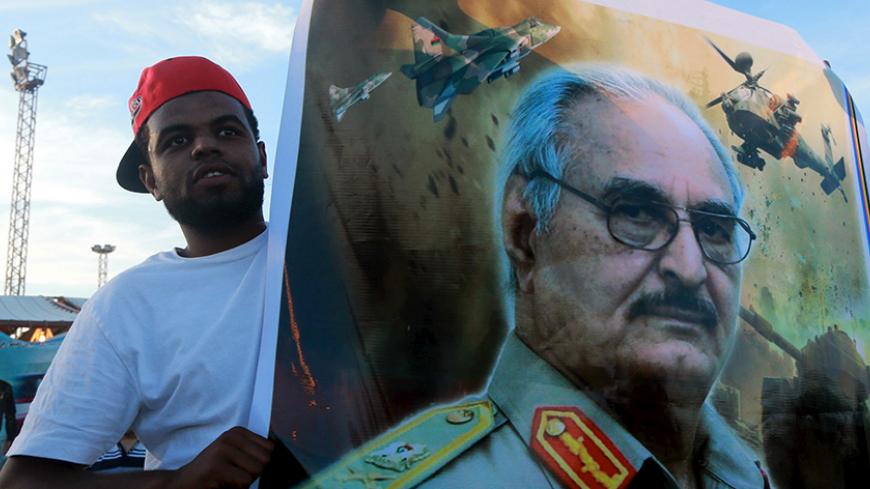 A man holds a picture of Gen. Khalifa Hifter during a demonstration in support of the Libyan army under the leadership of Khalifa in Benghazi, Libya, Nov. 6, 2015. - REUTERS/Esam Omran Al-Fetori

When Gen. Khalifa Hifter was about to launch Operation Karama (Dignity) in Benghazi, he appeared to be signing his own death warrant when he appeared on TV on May 17, 2014, making an announcement in which he declared war on terror, suspending the interim constitution and suspending the government and the elected General National Congress. No one took him seriously then, and his operation seemed like another episode in Libya’s sporadic mini-wars.

At the time, Benghazi, in eastern Libya, was dominated by different Islamist militias accused of killing over 200 military officers, journalists and civil activists, as well as well-known female activist Salwa Bugaighis on June 14, 2014, right after she cast her vote for the 2014 general election. Back then, Hifter was embarking on what appeared to be an impossible mission to rid Libya’s second-largest city of radical groups once and for all.

The coalition Hifter opposed included Ansar al-Sharia Brigades, listed by the United Nations as a terror group and implicated in the killing of US Ambassador Chris Stevens in Benghazi in September 2012. The coalition also included hard-line Islamist militias such as Libya Shield 1, Rafallah al-Sahati Brigade, 17th February Brigades and Benghazi Revolutionary Shura Council. Benghazi was a dangerous city for almost any security official and police officer, and as a military officer himself, Hifter knew that he may also be an assassination target.

However, three years on and Operation Dignity is being celebrated, at least in eastern Libya, as a successful military operation that has so far liberated most of Benghazi, except for small neighborhoods by the seafront. In the meantime, Hifter has transformed himself from a small warlord into an important player in Libya’s chaotic political scene — however controversial he has been. He is now a make-or-break player in shaping the country’s future.

Being a career soldier, Hifter figured that his best chance to succeed is to reorganize the remnants of the Libyan Armed Forces (LAF) that survived the eight-month NATO air campaign in 2011, to oust longtime leader Moammar Gadhafi. He started out with a few soldiers and a couple of professional officers who share his fear that they could well be on the assassination list unless they organize themselves into a fighting force.

Hifter reorganized units of LAF, and to help tap into the hundreds of former regime officers — living in hiding or exiled abroad, mainly in Egypt — he pushed the Tobruk-based parliament, which is backing him, to legislate a general amnesty law. This legislation offered amnesty to all former politicians and military cadres who do not have any criminal charges against them.

This was a clever move that earned Hifter wider public support across the country. More importantly, it enabled him to enlist the services of hundreds of well-trained officers from all over Libya, including cities and tribes associated with the former regime of Gadhafi. Today, LAF is truly representative and inclusive of all Libyans without the biases associated with militia formations on ideological, tribal or regional lines.

Many former officers and soldiers simply wanted to go back to their barracks, but not under militia rule, particularly in western Libya, and Hifter has been able to provide that conclusive mechanism. He even reinstated high-ranking officers who have all but been excluded from any official military duties since the regime fell in October 2011.

Today, Hifter leads a sizeable military force that is not only inclusive, but also one that has been able to bring its cadres together once again with one aim to fight terrorism and stabilize the country enough to complete its transition to stable democracy. At least, this is what Hifter has been saying all along.

His forces have recently scored well in their efforts against terror groups, particularly in Benghazi, and already have bases in Zintan and Wershafa in western Libya, as well as in the southern region.

Politically, Hifter has gained the trust of important regional countries including neighboring Egypt and the United Arab Emirates, as well as Russia. This is crucial for rebuilding a professional LAF capable of carrying out its duties.

On the third anniversary of Operation Dignity, Hifter chose to demonstrate a real show of force with a full military parade during a graduation ceremony of new recruits, including some 400 new officers and over a thousand soldiers. The celebrations were a message that he will continue his mission once described as suicidal.

In his speech to mark the anniversary, Hifter spoke of building professional armed forces that welcome its cadres, regardless of their backgrounds and loyal only to the country, promising “not to leave the capital Tripoli at the hands of militias,” as he put it.

It seems Hifter is undoubtedly moving ahead and his eyes are set on Tripoli, which is currently under the control of different militias, most of whom are his sworn enemies. It remains unclear if he is willing to use force to take the capital or perhaps find a negotiated way to bring about reconciliation — however difficult that seems to be. On May 2, Hifter met with Fayez al-Sarraj, the UN-backed prime minister, in Abu Dhabi and agreed to cease violence and encourage negotiations.

Whether Hifter is another Abdel Fattah al-Sisi in the making — preparing to change his military outfit to a civilian one — or the savior of a shattered country, remains far from crystal clear yet; but for a man like him, the gamble is huge because the stakes are so high.