In response to a growing rift between Riyadh's regional policies and some actions by President Donald Trump, King Salman has reaffirmed long-held alliances while distancing the kingdom from Washington. 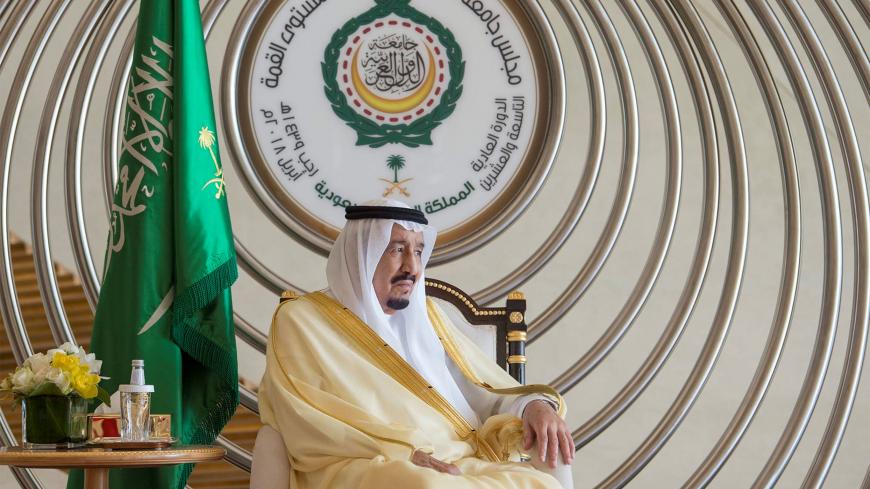 Saudi King Salman bin Abdul-Aziz Al Saud used the 29th Arab Summit last weekend to reaffirm long-standing political positions, amounting to some distancing of the kingdom from its close association with the Trump administration. The subtle change in tone publicly reflects growing private doubts about the US administration’s commitment to rolling back Iranian influence in the region.

Instead of hosting the Arab heads of state in the capital city, Riyadh, the Saudis selected the venue to be in Dammam in Eastern Province, the home of the kingdom’s oil wealth and its Shiite minority. So Dammam and nearby towns such as Khobar and Dhahran were decked out with the flags of the Arab states, including Qatar (but not Syria) to welcome the states that attended the summit. Of course, Eastern Province is also the part of Saudi Arabia that is the farthest away from Yemen. It is apparently outside the range of the Houthis’ Iranian-designed ballistic missiles. Last week, the Houthis announced that 2018 is “the year of the ballistic missile.” By the Saudis count, 117 missiles have targeted Saudi cities in the last three years.

Salman opened the summit by renaming it the “Jerusalem Summit.” In his remarks, he said the top priority of the Arab leaders is and should be Palestine. He strongly condemned the Trump administration’s Jerusalem policy. He said the Saudis saw Palestine and Jerusalem as their “first issue.” This rhetoric is not new, of course, and it is standard Saudi policy. The king also reaffirmed the Saudi commitment to the 2002 Arab Peace Initiative developed by his predecessors.

The stridency of the king’s remarks, however, reflects growing unease in the royal palace that events in Gaza and Jerusalem are moving toward even more explosive unrest next month when the US Embassy opens in Jerusalem. The Saudis are uncomfortable that they have been widely perceived in the Arab world as colluding with Trump’s son-in-law and adviser, Jared Kushner, to undermine the Palestinians’ claim to the holy city, a perception that damages the Saudi mantle as the defender of the holy mosques, which is crucial to the royal family’s legitimacy. Pictures on TV of protesting Gazans burning Saudi flags and pictures of Crown Prince Mohammed bin Salman have been blocked in the kingdom. Iran is actively labeling the Saudis as conspiring with Israel.

To counter charges that he is soft on Jerusalem, Salman pledged at the summit $200 million in aid. He is donating $150 million to preserve Islamic sites in Jerusalem and another $50 million to Gaza for the United Nations Relief and Works Agency for Palestine Refugees. He pledged to support Jordan’s King Abdullah after months of snubbing him.

The Saudis publicly endorsed the American, British and French attack on the Syrian chemical weapons infrastructure. The summit was divided on the issue, with Iraq and Lebanon calling the attacks dangerous. The leaders called for an investigation of the charges that chemical munitions are being used in Syria.

Riyadh was upset before the tripartite attacks by Trump’s promises to pull all American troops out of Syria soon. They have not been reassured by his remarks since about the reasoning behind the airstrikes in which he has promised not to try to fix the “troubled” region’s problems. To the Saudis, Trump increasingly sounds like Barack Obama in advocating a strategy that leaves the Arabs to take care of themselves. Riyadh was mystified when Trump claimed Salman was ready to pay for America to stay in Syria. In fact, the Saudis long ago gave up on trying to topple Bashar al-Assad. They want Washington to do the heavy lifting. They aren’t going to pay for it.

Salman also said that the Arab leaders must unite against Iran and its surrogates, such as the Houthis. The summit was divided on this, just as on Syria. The Saudis also are frustrated that Trump talks tough on Iran but has avoided confrontation with Tehran in Syria and elsewhere.

After the summit, the king inspected military maneuvers in Eastern Province, which includes troops from 22 Saudi allies simulating defending the kingdom from an Iranian invasion. The Islamic military alliance against terrorism is not formally an anti-Iran pact, but that is the Saudi intention.

The Saudis are not giving up on Trump. They have put their prestige behind the Trump administration by hosting him in Riyadh a year ago and with the crown prince’s extensive visit to the United States. They are encouraged by the dismissal of Secretary of State Rex Tillerson and the promotion of Iran hawk John Bolton as national security adviser. But their expectations about the administration have been downsized. The adjustment is tactical and careful, led by Salmon’s Jerusalem Summit.