5 reasons Iran is staying out of eastern Ghouta

Iran’s apparent low profile on the military operations in Afrin and eastern Ghouta has raised questions about its policy toward the Syrian war. 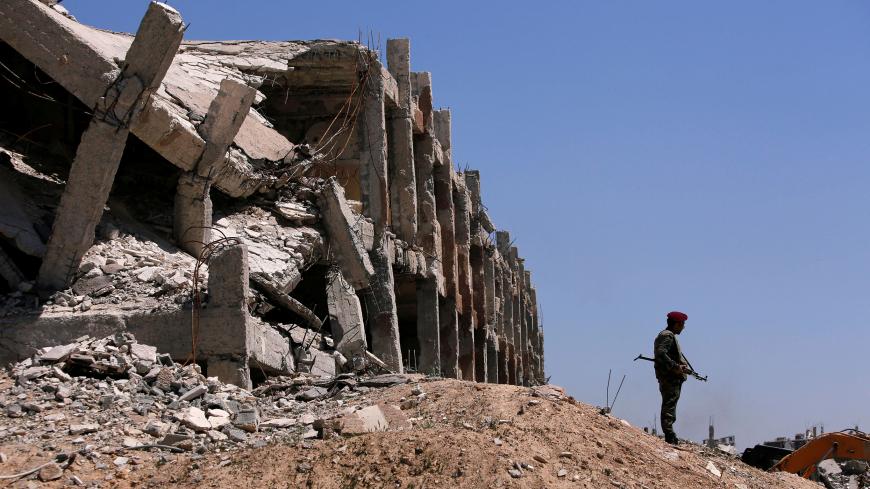 After weeks of heavy fighting between the Russian-backed Syrian army and rebel groups in eastern Ghouta, the Syrian government has managed to bring over 90% of the strategic Damascus suburb under its control. The development comes as the result of a deal between Russia and the rebel groups, based on which the rebel groups agreed to evacuate the area and transfer their remaining forces to the rebel-held city of Idlib in the country’s northwest. Now, with the radical group Jaish al-Islam also reportedly beginning to leave its enclave in Douma, President Bashar al-Assad’s government is just one step away from its most significant victory after retaking Aleppo in December 2016.

Since the start of Operation Damascus Steel in eastern Ghouta in February, Russia began to actively support the regime both by providing air support for the Syrian army and starting to negotiate with the rebel groups over evacuation deals. At the diplomatic level, Moscow prevented the United Nations Security Council from passing a resolution that would have tied the Syrian government’s hands in fighting the militant groups.

However, Assad’s other main ally, Iran, refrained from any active involvement, preferring instead to leave the task to Moscow and Damascus. Although Iran has always declared that its military involvement in Syria is of an advisory nature, this time there were no reports of the presence of Iranian military commanders in the Syrian war room nor even pro-Iran fighters in eastern Ghouta. Iran’s only direct political position on the issue came from Deputy Foreign Minister Abbas Araghchi, who on Feb. 22 expressed the Islamic Republic’s concern over the situation in the area, calling for a political solution to the conflict.

Why is Iran now breaking its seven-year tradition of supporting Damascus against the rebel and terrorist groups? Are we witnessing a change in Iran’s Syrian strategy or merely a tactical move aimed at preserving certain goals? To answer these questions, several separate but related factors should be taken into account.

First, beginning Feb. 18, the Syrian military’s operation in eastern Ghouta came a short time after its downing of an Israeli F-16 in what some Israelis have portrayed as part of an Iranian agenda to escalate the situation in Syria. It led to a new Israeli campaign against Iran’s presence in Syria, depicting it as a direct threat against Tel Aviv. As such, any new serious military involvement by Iran, whether in Ghouta or elsewhere, would have been used as a pretext by Tel Aviv to increase its pressure on Tehran, including via military action against pro-Iran and pro-Assad groups in Syria.

Iran is well-aware that after the collapse of the Islamic State’s self-proclaimed caliphate in Iraq and Syria, containing Iran’s influence is at the top of the US agenda, which Tehran views as building upon any opportunity to pressure it out of the Syrian scene. Even though Iran was absent from military operations in eastern Ghouta, the United States accused Tehran along with Moscow and Damascus of killing innocent civilians in the area. Coupled with the US allegations about Assad’s use of chemical weapons during the Ghouta operation, it is clear that Iran understood that any real involvement would have made it easier for Washington to make moves, including military strikes, to impede the Syrian army’s advances.

Meanwhile, if one agrees that Iran’s main military objective in Syria is to purge terrorists and militants from as much territory as possible, the goal can be well-achieved by the Syrian army with the help of Russia without any need for Iran’s direct presence. When it came to eastern Ghouta, the widespread international attention to the situation, especially from a humanitarian point of view, meant that sole reliance on military force was not a viable option and that there would be a need to reach some kind of agreement with the rebels down the road. However, unlike Russia, Iran has not been able — or willing — to forge any effective communication channels with the rebels, and is thus unable to politically engage them in a meaningful way. Therefore, the task of reaching a compromise with the rebels was handed to Moscow, and the Russians delivered.

While Russia was attempting to block the UN Security Council cease-fire resolution on eastern Ghouta, replacing it with its own draft resolution that would justify the continuation of military operations against terrorist groups, Iran was under UN pressure over its alleged involvement in the conflict in Yemen. Therefore, any further direct military involvement in Syria could have been used as proof that Iran plays a destructive role across the region. Iran’s absence in Ghouta helped Russia to not only pass its draft resolution, but also to block the Security Council resolution that sought to single out Iran over its alleged role in Yemen.

Finally, it seems more than a coincidence that Turkey’s military operation in Afrin was going on at the same time as the Russian-Syrian operation in eastern Ghouta. In other words, given that Iran adopted a more or less neutral stance toward both operations — though it did make some statements to condemn the Turkish move — there is a possibility that recent developments have largely been the result of a deal between Tehran, Moscow and Ankara as the three pillars of the Astana track. As part of it, Iran might have agreed to adopt a lower profile on both Afrin and Ghouta in order to gain Ankara’s consent to the Syrian government’s operation in the eastern suburbs of Damascus.

All in all, mindful of the bigger picture of developments in and around Syria, it could be argued that Iran’s position on eastern Ghouta has been based on a pragmatic take of the situation to better preserve its longer-term interests and not a result of the Islamic Republic revising its strategy in Syria.