Turkey's rejection of Moody's downgrade won't make it go away

Officials in Istanbul are dismissing a downgrading of Turkey's credit rating as part of a plot against the country, as the economy heads for troubled times. 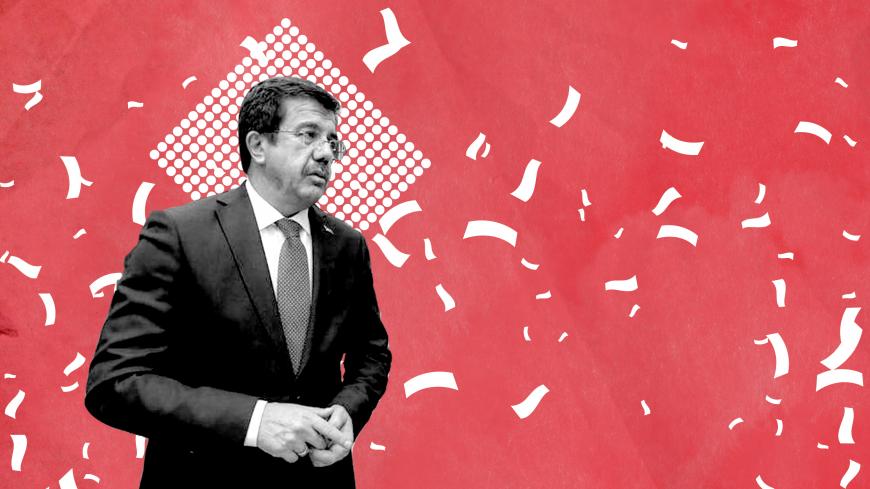 Turkey can't escape the impact of a Moody’s Investors Service downgrade simply by dismissing the report — but it's trying.

On March 7, Moody's broke the bad news: It was downgrading Turkey's credit rating to Ba2 from Ba1; both are considered "junk" status. The outlook for the designation was listed as stable, meaning the poor rating is unlikely to change anytime soon. In addition, Moody’s downgraded the long-term senior unsecured debt rating of the Treasury’s Asset Leasing entity, which handles sukuk lease certificates (Islamic bonds), to Ba2 from Ba1.

On March 9, the immediate impact of the changes was seen as Moody’s downgraded 14 Turkish banks. Decisions about bank ratings rarely make it into Turkish news, particularly because they remind people of the impact of the Zarrab/Halkbank case. Yet pro-government and opposition news outlets alike reported Moody’s decision.

Pro-government headlines were particularly telling. For example, Daily Sabah wrote about “Moody’s Scandalous Turkey Decision.” The columnist somehow concluded Turkey must be on the correct path. Fahrettin Altun, who writes for both Turkish and English versions of Sabah, also penned an eye-opening column in English titled “Moody’s Love for Fethullah Gulen,” referring to the exiled Turkish cleric and his Gulen movement, which Turkey blames for a 2016 coup attempt. In his column, Altun argued that the rating decision was “probably written with direction from [the Gulen movement], aiming to devalue the Turkish lira.”

Official government reactions were similar. At a recent strategy and training meeting with Turk Eximbank officials and employees, Economy Minister Nihat Zeybekci said he wondered what criteria Moody's used to determine the rating. "We don't care, whatever [they] do," he said, accusing the ratings agency of using "loan shark logic."

Similarly, Finance Minister Naci Agbal said the downgrade was of no importance and Moody’s report itself scored a zero in his book. Hatice Karahan, a senior adviser to the president, told government-run TRT World that credit agencies traditionally hold pessimistic views in general.

On March 9, President Recep Tayyip Erdogan told crowds not to pay attention to the rating agency because its goal was to clear the path for those who expect to benefit from hardships Turkey might face. He said neither Turkish nor global markets care about rating agencies and, like Zeybekci, he questioned their criteria. In some ways, Erdogan is right. The Moody’s decision, although reported as “shocking,” did not cause turmoil on Turkey's stock exchange, Borsa Istanbul.

Talat Yesiloglu, senior editor of Turkish Ekonomist magazine, told Al-Monitor he concurs with Erdogan that the downgrade had little to no impact on Turkish financial markets. But he also highlighted the Turkish government’s rather perplexing decision to establish a “national rating agency.” Even the idea of starting a national credit agency shows that, even as Turkish officials discounted Moody’s decision as a “political” one, the government continues to help generate rather political headlines to disguise a struggling economy.

That leaves one to wonder how the Turkish economy went from being the G-20's fastest-growing in 2017's third quarter (with a whopping 11.1% year-on-year growth in gross domestic product) to two grades below investment scale. Moody's isn't alone in its assessment; the other two most prominent rating agencies (Fitch and Standard & Poor's) aren't optimistic about Turkey either.

A sober look at the current Turkish and global economies can help us understand that the Moody's demotion is a consequence, not the cause, of a fast-approaching economic crisis for Turkey. There are three crucial political causes of the current situation.

First, there is the fear of early elections and increasing uncertainty. For at least the past three years, Erdogan has been running the economy on full throttle in campaign mode. Despite a call by international agencies for fiscal discipline, Erdogan’s personal quest for an imperial presidency has engaged Turkey in more-frequent elections than necessary: two in 2015, a referendum in April 2016 and now two upcoming elections (municipal elections in March 2019 and presidential and parliamentary elections in November 2019). However, Erdogan and his troupe are quickly passing election laws to magnify their own gains through the parliament — which signals early elections. Campaign mode also means tossing fiscal discipline out the window. Erdogan keeps promising more grandiose projects and extravagant subsidies to sustain his voter base.

Second, Turkey's current offensive in Afrin, Syria, is quickly emptying Turkish coffers. Simply put, Turkey is spending more than it is bringing in. Turkish Ekonomist's Yesiloglu said that despite all the angry rhetoric against rating agencies, Turkey needs foreign investment.

He said, "In January, the current [account] deficit was reported as $7.1 billion. So if we look at it annually, it surpasses $50 billion." Yesiloglu said that in 2015, the deficit was $32.3 billion, meaning that there had been a 60% increase in the deficit over two years. "So the current deficit rate goes up from 4.5% to 5.5% in relation to the national income," he said.

Moody’s describes this as Turkey being on the fast track for “institutional erosion and increasing vulnerability to external shock.” Erdogan can dismantle or form bureaucratic agencies with one word. Even high school entrance exams are designed according to his orders. This is only expected to get worse after the election, which will cement one-man rule while chipping away at institutional strength and independence. It is an open secret that senior bureaucrats can't act without prior approval from the top, which not only means delays, but the collapse of bureaucratic accountability. Turkish military involvement in Afrin without an exit plan also signals further political volatility in Turkey, along with more military spending.

Last, foreign direct investment, particularly from developed countries, has dwindled and Turkey is not finding replacement funding. Indeed, the loss of credibility goes hand in hand with falling investments. Timur Kuran, a professor of economic and political science at Duke University, told Al-Monitor, “Investors all around the world use the ratings of major investor research services such as Moody’s and Fitch in deciding where to invest. So Turkey’s recent downgrading by Moody’s will reduce the amount of capital invested in it. It doesn't mean that investment will dry up. In sectors where expected profits are high, foreign companies will continue investing and simply live with the added risk. But in sectors where expected returns are somewhat lower, foreign companies will either delay investments in Turkey, or simply invest elsewhere.”

Without transparency and political accountability, it is hard to ascertain where the money is miraculously still coming from in Turkey. Turkey has been sacrificing long-term progress for short-term measures. But short-term investments for high-interest returns is not a panacea for Turkey's vulnerability to external factors, which Moody's estimates is far higher than comparable emerging countries — and growing. That, along with rising interest rates in international markets, could present some serious economic hurdles. Vulnerability is an aggregate of inflation, unemployment, deficits and growth. In other words, a high growth rate alone won't protect Turkey from external shocks — in fact, it could accelerate the country's financial demise.

For all these reasons, Turkey's angry dismissal of international credit and monetary agencies’ evaluations — even as it struggles to attract foreign investors — is not the best policy.