Deadly protests in Turkey over the siege of Kobani led to a shock at financial markets despite the good news of Fitch affirming the country’s investment grade. 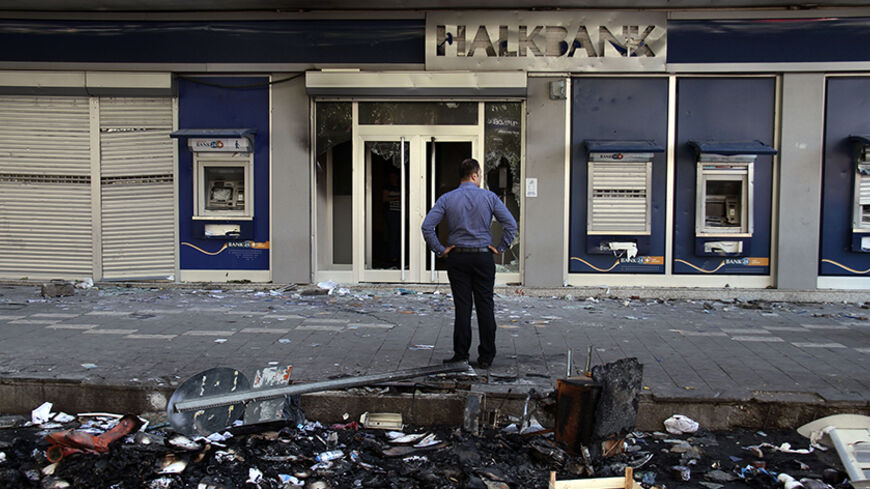 A man looks at a damaged branch of Halkbank, set on fire during clashes between Kurdish protesters and riot police overnight in Diyarbakir, Oct. 8, 2014. - REUTERS/Sertac Kayar

Rating time has come for the Turkish economy. Fitch Ratings was the first to announce its review. Contrary to the expectation that it would downgrade either the country’s credit rating or outlook, the agency kept both unchanged: the “stable” outlook and the BBB-investment grade.

The review, announced late Oct. 3 on the eve of Eid al-Adha, was expected to send the financial markets rallying. But when the markets reopened Oct. 8 after the holiday, the good news from Fitch was overshadowed by Kurdish demonstrators wreaking havoc across the country. Heeding a call by the Kurdistan Workers Party (PKK) and its political extension, the People's Democracy Party (HDP), thousands took to the streets Oct. 7 to protest the Islamic State’s (IS) attack on Kobani, with the ensuing violence resulting in dozens dead and hundreds injured. The wave of violence came as a shock for the stock market, foreign exchange rates and interest rates. The main index of the Istanbul stock exchange shed 1,400 points in a single day, plunging to a five-month low of 72,943 points. The Turkish lira, which had been expected to gain ground, slid to 2.29 against the dollar, while bond yields reached 9.78%.

The following day, Oct. 9, Fitch’s decision finally began to make an impact, mainly on the stock market and to a lesser degree on foreign exchange and interest rates. The Istanbul stock exchange made up for the losses over the Kobani protests, gaining 2,265 points to close the day at 75,208. The dollar slid from 2.29 to 2.25 Turkish lira, but moved back to 2.27 later in the day as the unrest continued. The bond yield fell to 9.48% before closing the day at 9.6%.

In the ensuing days, fluctuations continued at the markets under the impact of domestic and external developments. Following sharp slumps, the main index of the Istanbul stock exchange recovered, surpassing the 75,000-point mark and reaching 75,268 points in morning trading Oct. 15. The bond yield dropped to 9.29%, while the dollar was trading at 2.27 lira as of Oct. 15.

Fitch’s confirmation of Turkey’s investment grade raised optimism also for the Moody’s review in December. Unlike Fitch, Moody’s has kept Turkey’s outlook at “negative,” meaning that even a one-step downward revision could take Turkey below investment grade. Hence, an eventual decision by Moody’s to keep Turkey’s rating unchanged will be much more important than Fitch’s one.

While affirming Turkey’s grade, Fitch said the Turkish economy “continues to show encouraging signs of rebalancing” and welcomed “post-presidential election assurances that the current economic team will remain in place … as constructive.” The statement added that structural reforms, a lasting reduction in the current account deficit, a more stable inflation, higher domestic savings and increased foreign investment could result in positive rating action.

Fitch’s statement noted that Turkey's ratings were based on a number of key assumptions, including “no sharp escalation in geopolitical risk to a level that would be disruptive for Turkey's economy.”

This assumption deserves a closer look since geostrategic risks are increasingly threatening the economy. If the tensions over the latest unrest ease quickly and no fresh unrest erupts to profoundly shake the markets, there will be no problem. But if tensions escalate further over developments in Kobani, the markets could begin to factor in the geostrategic risks. The current pricings are based on the assumption that the unrest is temporary; hence downturns are followed by makeups. But growing geostrategic risks could have a negative impact on Moody’s Dec. 5 review and therefore on the markets. Alternatively, if the unrest dies down, Ankara’s new medium-term economic program for 2015-17 and preparations for structural reforms could have a positive impact on Moody’s review.

In short, Turkey is walking a tightrope. Fitch’s favorable review prevented the unrest from taking a more serious toll on the markets.

Pro-government media hailed Fitch’s decision as a “holiday present,” while the opposition press saw it as the “reward” of parliament’s approval of a government motion for possible Turkish military action in Syria and Iraq and the deployment of foreign forces in Turkey. The pro-government Aksam daily used the headline "Holiday present" and highlighted Fitch’s assessment that the Turkish economy “continues to show encouraging signs of rebalancing.”

Cumhuriyet, a harsh government critic, reported Fitch’s review in a story headlined "Motion reward" that included the following lines: “If the motion had not been approved, analysts say, Fitch would have based its review not on the less-than-a-point decrease in inflation in September, but rather on the prospect of two-digit inflation in the coming month, which has become inevitable with the 9% hikes in electricity and gas prices. Moreover, a country that, according to the latest OECD income distribution report, faces rising income poverty as well as borrowing hardships due to foreign exchange rate pressures amid relentless inflation and unemployment could not have clung to the existing grade. The contradiction between Fitch’s carefully worded warnings and its rating decision leads to suggestions that the agency made a political decision.”

The Milliyet daily, which used to be leftist leaning but is now careful “not to anger the government,” made the following analysis: “Any negative rating by Fitch could have upset market balances. This did not happen. Two agencies [Fitch and Moody’s] maintain their investment grade [for Turkey], which provides investors with a reason to stay in the market. The foreign share in the stock market is at a six-month low of 63.09%. [Fresh] foreign investment in the wake of Fitch’s decision would not be a surprise. At this point, a differentiation in a positive direction is expected in Turkish lira assets.”

Fitch’s decision, however, failed to satisfy Economy Minister Nihat Zeybekci, who never misses a chance to slam rating agencies. “Turkey’s realities indicate the credit rating should have been much higher,” the minister said.

In sum, the following conclusion can be made: IS has begun to make an impact not only on Turkey’s exports but also on its politics and domestic security. In this climate, the good news from Fitch came as a “remedy” for the markets. But to get a similar good rating from Moody’s in December, Kobani’s shadow over the markets in particular should be removed.