Turkey’s top leaders have threatened to cancel the contracts of credit rating agencies Fitch and Moody’s as financial markets get nervous at the prospect of Turkey being downgraded. 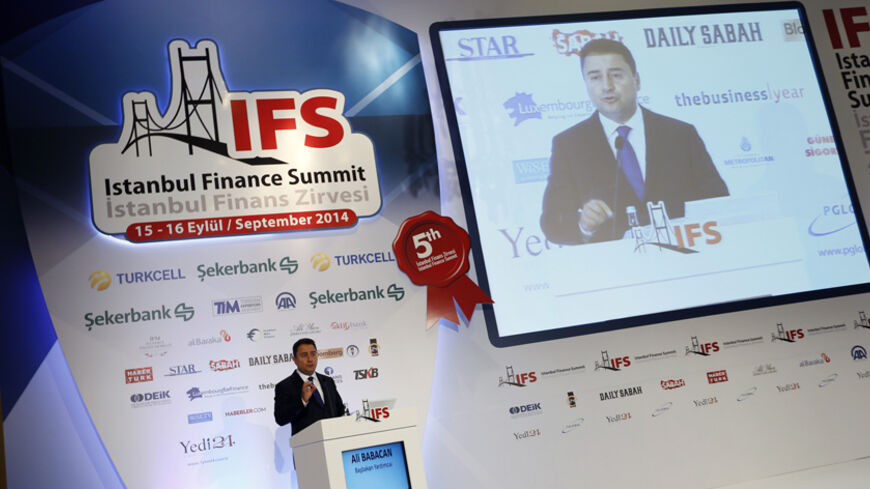 “Turkey faces no risk of an economic crisis. The [agencies’] statements are politically motivated. They are void of any economic and scientific basis,” Erdogan told journalists on a flight back from Qatar. “They’ve done it before, and I severed ties with Standard & Poor’s. If they go on with this attitude, I’ll tell the prime minister to sever ties with them as well. We’ve gained nothing from them. We owe them nothing for where we stand today. Both you and I are aware of what’s going on behind the curtains.”

Prime Minister Ahmet Davutoglu followed suit. “The credit rating agencies are making incorrect assessments. They issue messages for the slightest of tensions,” he said. “We expect them to make objective assessments that don’t mislead the markets. Turkey won’t keep silent if they create an anticipation of a crisis through manipulative reports.”

And Deputy Prime Minister Ali Babacan, who is in charge of the economy, said, “Those agencies are trying to feel Turkey’s pulse with teams of two or three people. Meanwhile, there are many investors putting billions of dollars in Turkey. Most of them have their own assessment teams — 10 people, for instance, working in the field, meeting with hundreds of people and getting an in-depth understanding of the country. That’s how they make their decisions to invest. Hence, we expect rating agencies to work with larger teams and grasp Turkey’s realities through deeper analyses before deciding their grades.”

The president and the prime minister appear ready to cancel Turkey’s contracts with credit rating agencies. Yet, those agencies monitor and evaluate not only Turkey, but almost all developed and developing countries, including the United States and European countries.

Turkey has worked with credit rating agencies since 1992. The grades were never considered to be good enough, but the contracts continued because international markets watch the grades. Countries with higher ratings are able to borrow on more favorable interest rates. Foreign investors and big funds also take into account credit ratings before they invest in a given country. In short, working with credit rating agencies is a necessity, though their assessments can be disputed and even their contracts can be canceled at times.

Fitch Ratings is expected to publish its reviews of Turkey on Oct. 3, and Moody's is on Dec. 5.

Fitch’s latest statement on Sept. 11 gave little reason for optimism. It said that Turkey’s economic rebalancing was becoming “more challenging,” that the pace of credit growth decline was slowing and that further interest rate cuts could easily reverse the trend.

Moody’s latest statement, of Aug. 15, also contained negative signals. It cautioned that Turkey’s key economic and institutional credit challenges — slower growth, high inflation and external vulnerability — were unlikely to be resolved by the June 2015 general elections. It stressed that Justice and Development Party (AKP) governments had so far benefited not only from structural improvements but also from consumption and investment growth that owed to global liquidity, foreign capital inflows and a fast credit growth, noting that sustaining this momentum would be harder in the coming period.

Where do Turkey’s grades stand?

On Nov. 5, 2012, Fitch raised Turkey to investment grade, while setting its outlook at “stable.” The grade remained unchanged for almost two years despite serious political turbulence such as the Gezi Park anti-government protests and corruption accusations against AKP ministers. Now, the critical juncture has come.

If Fitch moves to change Turkey’s outlook to “negative,” the investment grade will remain unchanged. And preserving this grade is what really matters.

There is also the possibility of no rating change at all. Yet, Turkish financial markets have begun to give negative signals under the strain of internal and regional developments: The Turkish currency is slipping against the dollar, interest rates are on the rise and the stock market is on a downward trend.

The dollar’s recent move to as much as 2.25 Turkish lira show that Economy Minister Nihat Zeybekci’s “upper limit” is at risk.

When it comes to Moody’s, it raised Turkey to investment grade on May 16, 2013. But on April 10, 2014, it changed the country’s outlook to “negative” from “stable.” If the agency moves to downgrade the outlook, Turkey’s credit rating would fall below investment grade. This could mark the beginning of a volatile period in the economy. The negative impact could lead to a lesser inflow of foreign investment and give a fresh reason for a further increase in interest rates and a further decline in the Turkish currency, which would mean higher inflation.

Fitch and Moody’s are both official partners of the Turkish treasury. What if they downgrade Turkey and the government responds by canceling their contracts?

Nothing much will really change. Last year, the treasury stopped working with Standard & Poor’s, whose stern reviews of Turkey had earned it the nickname “the zero-grading teacher.” What the agency lost from the move was a mere $2 million to $3 million in income. Yet, it continued to monitor and evaluate Turkey on grounds that other clients still requested the service. Fitch and Moody’s will likely do the same if their contracts are canceled.

The answer can be found through another question: Did Standard & Poor’s raise Turkey’s rating after its contract was canceled? No. Even after Fitch, Moody’s and the Japan Credit Rating Agency raised Turkey to investment grade, Standard & Poor’s continued to keep Turkey one grade below, at BB+.