Syrian women in Egypt learn to fight through fear

A Cairo group is helping Syrian women gain the confidence and skills they need to confront the harassment they often face as refugees in Egypt, and even non-Syrians are joining up. 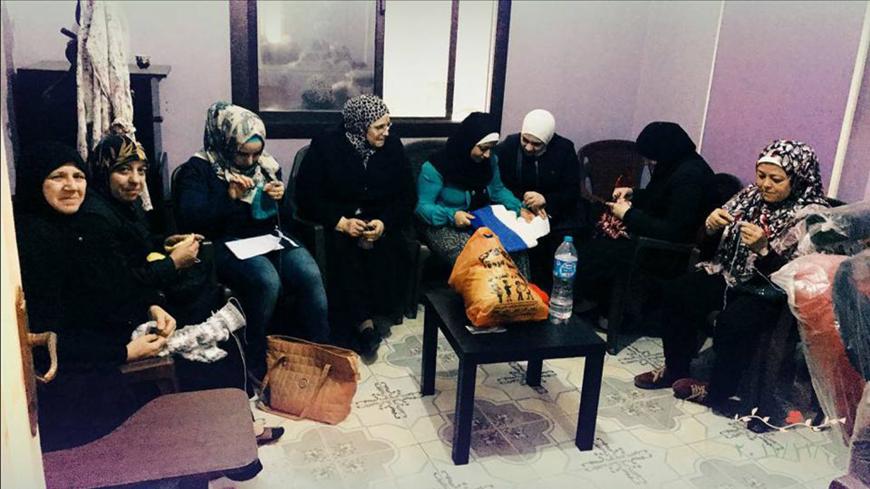 A group of Syrian women take part in a knitting session hosted by the Souriyat Association. Posted Nov. 8, 2017. - Facebook/SouriyatAssociation.SY

Women who fled to Egypt to escape the Syrian war are learning to stand up for themselves despite their refugee status. Sharing the common experiences of war and displacement, fear and uncertainty, these women are training to fight harassment, assault, theft and other problems that plague them in a land that's not their own.

The Souriyat Association, a nongovernmental organization in Cairo, has provided help to Syrian women since 2014. The group offers a variety of training and a sense of community. One of its more recent efforts, launched in November, has begun bearing fruit, empowering women physically, emotionally and economically, according to head Latifa Daghman.

The program includes self-defense classes. There's an urgent need to teach refugees self-defense, as so many of them have been subjected to verbal and physical harassment as well as theft, Daghman told Al-Monitor in a phone interview. Syrian women ought to be able to stand up for themselves, she said, so they can adapt to societies and communities that are different from where they were born and raised.

"I think Syrian women are vulnerable. They are not economically empowered and are without any income. They keep silent when they are abused or humiliated. All this is the result of a lack of cultural awareness, as they aren't familiar with their legal and social rights,” she said.

“The idea of the initiative came about while we were still in Syria, before we moved to Egypt in 2013," she explained. “We discovered that Syrian women’s suffering here is greater than in Syria, given the difference in the societal view of women, especially refugee women, who are looked down on and treated unfairly without any regard to their rights,” Daghman said.

The training also includes human rights courses to educate Syrian women about Egyptian laws on physical or emotional abuse, so they know what they can do if they are exposed to such violence. There are also programs about self-confidence and mental health.

Souriyat's leadership was surprised by the strong turnout of women wanting to participate. “We didn't expect these large numbers of ladies to show up for the courses and classes," Daghman said. "I can say that after several classes, these women are feeling more confident to take matters into their own hands.”

One participant was later robbed but managed to defend herself. "Another woman hit a harasser and reported to a nearby police station," Daghman said.

Zahra Abed has been a committed participant in the self-defense training for months. “The mental health and combat courses have had a great positive impact on my life after many hardships in the past three years,” Abed told Al-Monitor.

“I arrived in Egypt in 2013 and started looking for a job that suited me. I started working with my sister making and delivering Syrian food in Cairo, but it was exhausting. I then took a job in a nursery for a pittance. My employer tried to exploit my situation as a refugee to get money from the children’s parents, who empathized with me." To her, it seemed marriage was her only option — one she faced reluctantly.

"I met an Egyptian man and after several attempts to persuade me, I finally caved. When we got married, everything became different. He started mistreating, insulting and beating me," Abed recounted. “Now after taking several courses, I've learned to be more assertive, more confident and to stand up for myself."

Lina Haki followed her uncles to Egypt with her brothers who fled the Syrian war. Her suffering began as soon as she set foot in Egypt in 2012.

“Egyptians were very welcoming, but I could see how young Egyptian men looked at us. They thought that we were ready to sell our bodies since we are refugees and in need of money and jobs. I have been harassed physically and verbally on several occasions,” she told Al-Monitor.

Haki recently joined self-defense and psychotherapy courses and is also learning new skills such as knitting and sewing to be able to support herself.

According to the UN High Commissioner for Refugees, as of Jan. 31, 48.4% of the 127,414 Syrian refugees registered with the organization are women.

Syrian human rights activist Rafaa al-Rafii, who has been in Egypt since 2012, told Al-Monitor, “Syrian women living in Egypt have become more aware of their rights and situation thanks to these courses. Today, many women are immediately reporting harassment to the nearest police station." They are also reporting incidents to UNHCR, which provides lawyers to help with all the legal procedures, she said.

In Egypt, the National Council for Women is the body officially responsible for women’s affairs, in accordance with a presidential decree. But the decree doesn't address care for non-Egyptian women.

Daghman said she found it interesting when non-Syrian foreigners also began coming to the center. “A bigger surprise, however, was when Egyptian women joined the self-defense classes,” she said.

Egyptian participant Nirmin Mohammed said she wanted to change her life after being physically and emotionally abused by her husband for eight years. “I do not wish for my daughter to go through what I had to endure at the hands of her father. He humiliated, beat and insulted me. He sometimes withheld money," she said.

"I went through a lot of hardships in my life. After my divorce, I decided to change my life for the better and become a stronger version of myself so I can raise my daughter to be strong and able to stand up for herself.”