Lina Khalifeh began learning martial arts for fun, but helping a friend showed her it can do much more. 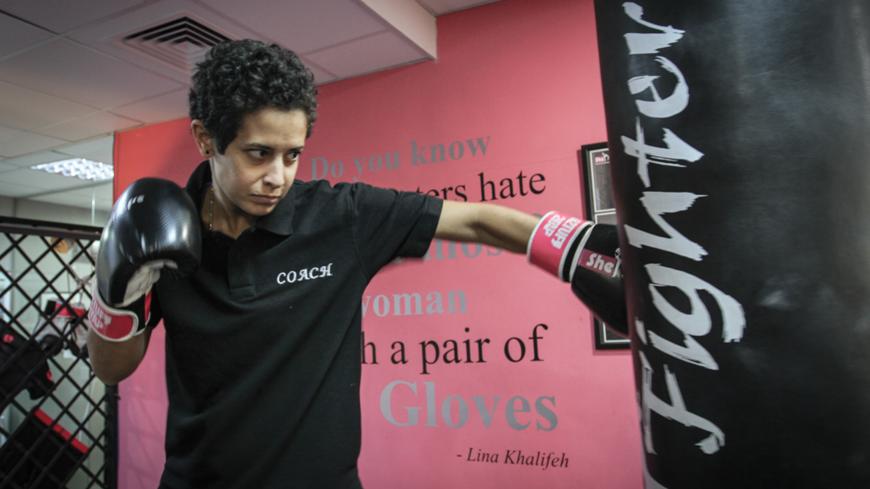 Lina Khalifeh trains at the gym she opened in 2012, Amman, Jordan. - Marta Malaspina

Lina Khalifeh was studying at the University of Jordan when she saw a friend come to school beaten black and blue. She kept questioning until her friend confessed that her father and brother had beaten her up and took what money she had.

It was then, Khalifeh explained, that she realized that the kickboxing she practiced for fun could help her friend and even change the power dynamics between men and women.

“I told her to report to the police but she said that women can’t do anything. So I decided to train her so that she can defend herself if that happens again,” Khalifeh told Al-Monitor. “We began to train every day in the basement of my parents’ house. While we improved her physical condition and technique, we started to dream of teaching martial arts to empower women in Jordan.” By training her friend, Khalifeh also understood that learning martial arts is not only about self-defense but also a way to prevent violence against women. It gives women the power to walk with confidence in the male-dominated streets of Jordan, where verbal and physical harassment is very common.

The dream came true in June 2012, when Khalifeh opened She Fighter, the first women-only gym in her hometown of Amman. Today, She Fighter has trained 18,000 women through workshops around Jordan, Lebanon, South Korea, Italy and the United States. Among her trainees are 3,000 Syrian women refugees.

In 2015, She Fighter’s founder was commended in a speech by former US President Barack Obama at the Global Entrepreneurship Forum and in 2018, she received Vital Voices' Economic Empowerment Award. Since 2016, Khalifeh has traveled all around the world to talk about She Fighter and its training program.

“Our methodology combines classic martial arts techniques with self-empowerment strategies,” Khalifeh explained. “I believe that a new vision of gender is transmitted. We women need more trust and love for ourselves. And sometimes it’s the awareness of our physical possibilities that gives us self-confidence. Two hours of weekly training at She Fighter have more impact on women’s lives than 10 conferences on women's rights.”

She Fighter has attracted girls as young as six, but most of trainees are students in their early 20s. The studio offers five levels of training, with tests to advance. There are foreign students from Italy and France who also train at the gym on the weekends. Some of Khalifeh’s earliest students have become trainers themselves. Sara Barake, 30, became the gym's master trainer in 2015 after three years.

"Before I started training, every time I saw men in the street in groups, I instinctively changed my path,” Barake told Al-Monitor. “Now I walk among them or right through them, making my way. The way you feel your body changes." The students toughen up quickly and those who arrive late for class are mockingly called "Barbie.”

“It’s not the muscles, nor the dress, nor the veil that creates strength. The strength of the fist and of the kick is first mental, then physical. The slimmer girls manage to hit harder, because they want to overcome themselves," Barake explained. “She Fighter changed my life. If Lina had not proposed that I become a master trainer, I wouldn’t have believed that I would be able to do it. I traveled to India alone, despite all the warnings from people around me. I could feel there — as in the Arab countries — that it’s not a safe place for women, but I knew that if something ever happened, I would be able to defend myself.” Barake now lives in Germany, offering kickboxing workshops. She would like to open a She Fighter studio there as well.

Despite death threats on social media and in the neighborhood from men who disapprove of their activities, Khalifeh continues her work. "I called the police and they asked me to talk to my brother or father. I said that I am a 33-year-old woman and I can speak very well for myself and for the legal work I do,” Khalifeh recalled. In February 2019, Khalifeh was verbally assaulted for the way she looks at a hotel in Istanbul and she was refused entry. She mobilized support on social media until the public outcry prompted a warning from the Tourism Ministry about discrimination at the hotel. “We want change. Let’s stop the haters from attacking us,” she posted on Facebook.

Jordan has made positive strides toward ending gender-based violence, notably by abolishing Article 308, a legal provision that pardoned rapists if they married their victims. Nonetheless, Jordanian women are still vulnerable, especially because many officials deny the extent — or even existence — of gender-based violence. That may well be why each week, a stream of young women pour into She Fighter to learn self-defense. "She angry, She Fighter!" they scream at the end of each session.