In a makeshift center in Jordan's Husn Palestinian refugee camp, a retired military coach not only teaches martial arts to youths with disabilities but also gives them confidence. 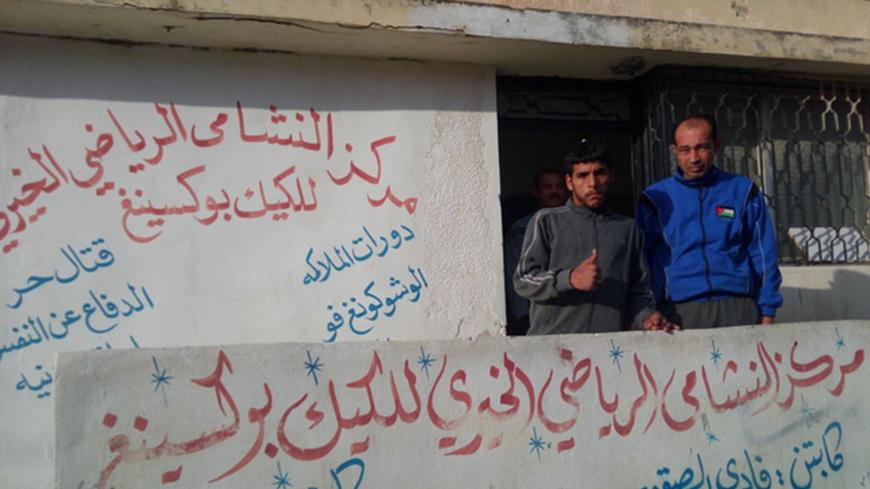 Inside the Palestinian Husn refugee camp, 80 kilometers (50 miles) north of Amman, Fadi al-Squor, a member of the Jordanian Kickboxing Federation, has established a rudimentary sports center to train disabled youths in martial arts and self-defense.

Squor’s free trainings are a result of the outrage he felt when he watched a video that showed a man spraying anti-rust spray into the mouth of a mentally disabled person in the city of Irbid, north of Amman, while others watched and made fun of the victim. The video, which went viral in 2016, encouraged Squor to teach children and youths with disabilities to stand up for themselves through self-defense and martial arts classes.

Squor, who was a sports coach in the Jordanian army before he retired in 2014, told Al-Monitor, “[The video] and similar incidents prompted me to think about protecting this vulnerable group and to boost their confidence. I rented a rundown house in Husn camp — paying for it myself — and named it Sawaed al-Nashama sports center. I welded iron bars and arranged them as training machines. We have trainees with hearing impairment, Down syndrome and various birth defects. I started training them in May 2016 on how to defend themselves against attackers.”

“Today, the center has 20 members who are all camp residents. I also formed a kickboxing team, made up of eight children with hearing and speech impairments.

Although the center was poorly equipped, we managed to train them professionally,” he said, expressing special pride in the success of Ashraf Abu Aziz, a kickboxer with Down syndrome who won a gold medal in an exhibition match at the Athens Martial Arts Games in 2016.

That year, the games began inviting special needs kickboxers for a special, honorary match. Squor said, “My entire team participated in the international martial arts competition for people with disabilities that was held for the first time in Greece in 2016.”

Sawaed al-Nashama center, which Al-Monitor visited, lacks funding; the walls are damp and the equipment is primitive. “We don’t receive any funding. Everything you see here I bought at my own expense with my modest pension. I am trying to encourage the public and institutions to provide the center with the necessary support to keep going,” Squor added.

The parents of the children call him the “captain of humanity.” Squor became even more popular within the community when Abu Aziz won first place in Greece. There, Abu Aziz and the Greek national kickboxing champion faced off in an exhibition match, and Abu Aziz was declared the winner. In 2017, at the invitation of the president of the World Martial Arts Trainers Association, Hassan Bitar, Abu Aziz went back to Greece to again participate in the kickboxing championship, along with eight children who are deaf or speech impaired. Abu Aziz again won the gold medal in an exhibition match.

Squor aims to have children with and without disabilities train together at the center. “This is a big challenge. Many parents of healthy children won't let them train with disabled children, whom they regard negatively. I am trying to raise awareness among families on this issue, stressing that this group of children needs moral support,” he said.

Despite the championships and medals his team has won, there are very few martial arts competitions in Jordan or abroad they can compete in. The Jordan Paralympic Committee, which was established in 1981, focuses on competitions in table tennis, weightlifting, weight throw and gymnastics for those with disabilities.

Muhannad al-Azza, secretary-general of the Higher Council for the Affairs of Persons with Disabilities, a governmental body, described Squor’s initiative as “a pioneering step” that helps the disabled to protect themselves from violence.

“Helping those with mental disabilities is admirable as they are the ones who often are subjected to violence and abuse. I also believe it is very important to have a place where they can train and [feel comfortable] to speak up about any abuse or mistreatment they face so that the attackers are pursued. This would help decrease the occurrence of such incidents,” Azza told Al-Monitor. “People with disabilities aged 5 and over constitute 11% of the total population, which means nearly 1 million people [in Jordan]. The World Health Organization has put this figure at 15% of the total population of each country."

Commenting on the council's role to confront the attacks on this group in society, Azza said, “The council sought to make amendments to the Penal Code of 2017, so that physical and moral abuse and attacks against people with disabilities face harsher punishment. The amendments were ratified by parliament in 2017 in an unprecedented step.”

Squor is trying to convey a humanitarian message to those around him of the need to integrate persons with disabilities in society, stressing that this would be a bumpy road fraught with difficulties given the culture in Jordanian society. He called upon private and public parties to provide support to those who need extra assistance in order to shed light on their situation and hone their skills.