Al-Monitor talks to four Moroccan female martial arts athletes about cultural stereotypes and how to inspire and empower future generations of female fighters. 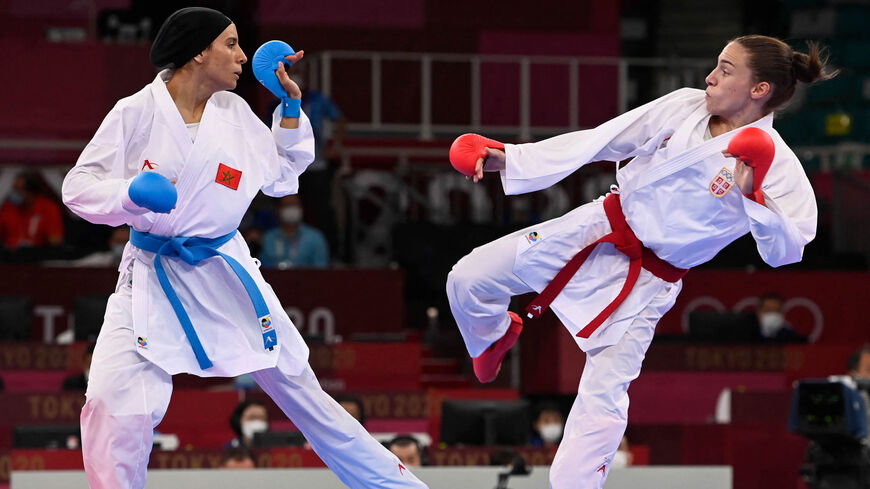 Morocco's Btissam Sadini (L) competes against Serbia's Jovana Prekovic in the women's kumite -61kg elimination round of the karate competition during the Tokyo 2020 Olympic Games at the Nippon Budokan, Tokyo, Japan, Aug. 6, 2021. -

The world of martial arts has been opening up to female fighters only recently. While famous mixed martial arts (MMA) fighter and ex-judoka Ronda Rousey paved the way to the ring for generations of fighters internationally — de facto changing a very macho environment — in the Arab world the concept of a female fighter is still something new.

Yet it is the very traditional Morocco that is producing a number of female champions, in many different martial arts disciplines. Perhaps this is because Morocco promotes martial arts. The Union of the Royal Moroccan Federation of Martial Arts and Combat Sports, which was established in 2014 by the Moroccan Ministry of Youth and Sports, actively promotes, develops and protects the interests of this sport.

During the Islamic Solidarity Games 2022 in Turkey, Morocco secured 62 medals: 15 gold, 13 silver and 34 bronze medals. In June, the sport received additional attention when Moroccan boxer Aya Bozarhoun won the fourth title at the Muay Thai and Boxing Championship in France. The 11-year-old athlete has dominated several regional and national boxing and Muay Thai competitions recently, receiving praise from the president of the Moroccan Royal Federation of Kickboxing and Muay Thai, Abdelkrim El Hilali.

Hilali said that Morocco is proud that four athletes — two females and two males — qualified for The World Games in Birmingham over the summer. This came right after the announcement of the qualification for The World Games of female athletes Belouarrat Oumaima and Meriem El Mubarak, the first Arab girl who qualified for the 2017 World Games and awarded by King Mohammed with the Wissam Al Moukafaa Al Wataniya order of national merit in 2016.

“As a Moroccan woman I strongly believe that it is very important for women to learn how to defend themselves,” said two-time world champion, category 62 kg, Hind Charifi, 32, who practices the martial art of Brazilian jiujitsu (BJJ). She is convinced that martial arts can provide self-defense tools for women in order to help them regain autonomy over their physical security in Morocco and elsewhere.

Charifi studies at Royce Gracie Ju Jitsu Academy in Dubai, where she competes professionally. She moved to Dubai after having taken up martial arts in Morocco in 2019.

When she first walked onto the mat, she knew she was entering a discipline with few female athletes. “There is still the idea that combat sports aren't safe, and for women especially there is this fear of damaging their face,” she told Al-Monitor.

The first prejudice is connected to the stereotype that women are fragile and not suited for combat sports, a belief rooted in the mentality of many Moroccan families.

Charifi's family was initially not on board, but after seeing their daughter's results and observing her increased confidence, they started supporting her. “They were proud of my results, and even my sister was inspired to become a boxer,” she noted.

Religion might present additional issues. “I’m a Muslim and as you can imagine it is hard to explain that women can fight and defend themselves,” Charifi added. “Moroccan women are only just starting to get into combat sports. At the time I was living in Morocco, for five or six years, I was the only female Moroccan BJJ competitor.”

Charifi’s first fight was in Abu Dhabi in 2012. “I was scared to get injured, but I made it to second place,” she recalled.

Khaoula Oubraim, Moroccan kickboxing champion, was encouraged by her mother to study martial arts, but when she started participating in championships more seriously, the rest of the family opposed to the decision, fearing she would get hurt. “But my mother was always supportive; for her, it was this dream that her eldest son did not realize,” she added.

Based in a small Moroccan city at the time, training in a safe space proved challenging. She was only 17 when she took up kickboxing at a local gym, where she experienced sexual harassment by two coaches.

But despite the bad experience, she didn’t give up the sport and decided to enroll in another gym more than 10 kilometers (6 miles) from where she lived, a place she reached on an old motorbike that, on several occasions, broke down in the middle of the road. Often she had to commute by foot and confront thieves and attackers.

Her commitment and determination paid off; Oubraim won the title of Moroccan Champion in K-1 in 2018.

“My mother was the first person to support me, along with my coach, who is also my father-in-law,” said Brazilian jiujitsu world champion Amal Amjahid. She told Al-Monitor, “People around me often said it wasn't a woman's place and it was for men.” However with time, everyone around her started accepting her love for kickboxing, becoming proud and supportive of her successful career.

“I tried several types of martial arts with the aim of finding the one that I liked the most,” she noted.

As soon as Amjahid took her first BJJ class, she knew it was exactly what she was looking for. “With jiujitsu I had finally found the martial art that allowed me to beat someone bigger and stronger than me.”

She tested her skills in both girl's and boy's divisions to challenge herself and get the most out of the tournaments. “When I started jiujitsu I was the only girl taking the classes and only few girls took part in tournaments,” Amjahid said. “Today there is noticeable progress, several classes at the various academies are filled with girls.”

Amjahid is from Belgium, but she feels very connected to her Moroccan heritage, noting, “I am a mix of both cultures and I try to make the best of both. I feel very connected to Morocco, and I think this connection strengthens me.”

Franco-Moroccan Rizlen Zouak, 36, told Al-Monitor, “Morocco is part of me. I am proud and honored to be the first Moroccan woman to qualify for the Olympic Games and to be the first female MMA fighter.”

Nicknamed "the lioness of the Atlas," Zouak is several times African champion, European team champion in France, and has participated twice in the Olympic Games in judo.

Zouak started practicing judo when she was six years old. “When I was a little girl I loved getting into fights. When I took up judo I loved it straight away and I told myself I wanted to become a champion,” she said. She was lucky to have a supportive family that helped her in her efforts.

At her first competition as a young judoka, Zouak won national medals in 2008 and 2010. She won seven World Cup medals and took silver at the Grand Prix in Samsun in 2014. She took the African title in 2012 and 2015 in the U63kg division. At the Olympic Games in London, she finished 17th. “When I entered higher level competitions, I had the chance to really prove my worth. At 15, I started training with the France judo team. I was extremely determined, and I had a deep desire to become proficient at a higher level.”

In 2017, Zouak became interested in MMA, where athletes have a diverse background in different martial arts. In order to enter this new discipline, she had to learn boxing and kicking; even though she was a very proficient judoka, she was a beginner in striking disciplines. Her first big challenge was in London. “It was just incredible; what an immense joy to be able to bring this first female victory in MMA to my homeland Morocco,” she said.

Amjahid explained, “Practicing martial arts is important for women in order to acknowledge our strength, and also realizing that we are capable of dealing with aggression makes us more confident and courageous. Luckily I never faced aggression myself. I think people notice your self-confidence in the way you walk, but also in your eyes.”

Charifi remembers having to use her fighting skills a few years ago at a club in Paris, where a person followed her and tried to touch her chest. “I chocked him, and then I had to raise his legs in order to wake him up,” she said.

She also experienced a street attack in Morocco. “The guy was shocked and scared by my reaction, which actually came quite natural to me,” she recalled. “He understood that I could beat him up and he ran away.”

Aside from self-defense, Charifi believes that being a martial arts athlete is something that influences all aspects of her life. “For me, it is something that enhances confidence in all areas of your life — from the way you present yourself at work, to raising kids, to doing stuff that is traditionally considered ‘a men's task’ such as fixing the sink or a car.”

Zouak concluded, “There always will be people who are misogynistic, but you have to leave them in their world, ignore them and be on top of your game.”