Several sports training centers have opened in Aleppo and Idlib to engage children in sports in an attempt to somewhat normalize their lives. 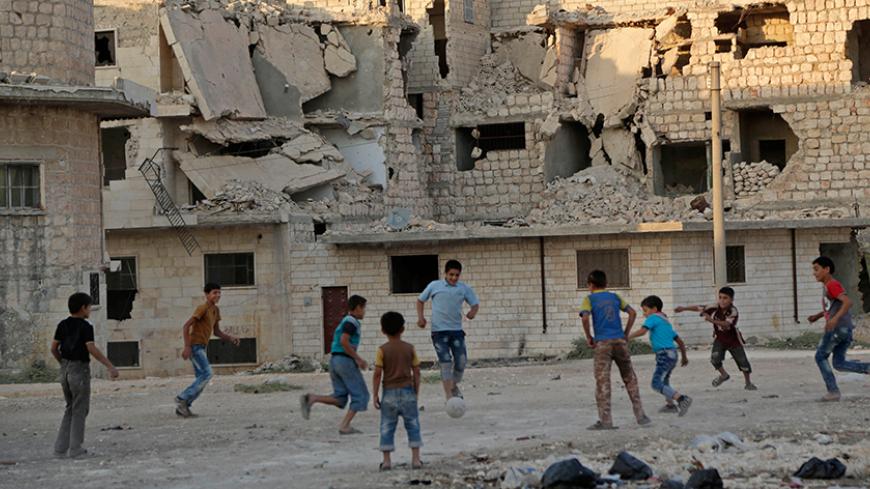 ALEPPO, Syria — What really pains journalists and photographers who visit Syria are the scenes of children in the camps and on the streets. Instead of going to school, they are selling cigarettes or handkerchiefs as the war rages around them. Many youngsters aged 9-14 have become their families’ breadwinners after losing a parent in the war.

Many of the children in Aleppo and Idlib have been out of school for three years now, without much-needed assistance. According to a 2014 report by UNICEF, around 2 million children are in need of psychological support or treatment, with 5.5 million children affected by the war, some of them stuck inside Syria and others living abroad as refugees.

Scores of children have been killed in the brutal shelling by Syrian regime forces since the start of the war in early 2011. On Nov. 30, the Syrian opposition released an estimate of 16,446 children under the age of 16 have been killed so far in the war.

Child soldiers are also being recruited by extremist organizations such as the Islamic State, though there are no official estimates of the number of recruited children.

Recently, the Syrian General Committee of Sports and Youth opened sports training centers in the cities of Aleppo and Idlib to let children take part in soccer, judo, wrestling and chess. The committee is a nongovernmental sports organization concerned with the affairs of Syrian athletes who oppose the regime of President Bashar al-Assad. It is supervised by a group of athletes and journalists who defected from the Baath Party and Assad’s regime, established new sports confederations under the umbrella of the Free Committee and financed by civil society organizations in Syria.

In early 2015, the General Committee of Sports and Youth organized a chess tournament in Aleppo and two rounds of soccer in March.

Al-Monitor visited a training center for martial arts in the northern countryside of Aleppo. Coach Ghazal Hilal, a former kickboxing champion who won gold medals for Syria, shared his feelings about overseeing the training of 40 children in the Bab al-Salam refugee camp, on the border of Syria and Turkey. He said, “These centers are very important. They serve as fuel for the vehicle through which we will revive sports in children’s hearts despite the pain, the wounds and the difficulties. Through martial arts, we will learn about a child’s secrets and his psychological and creative potential. … Watching these children leave their tents and go to the yard to play, laugh or spray each other with water shows that our mission will save this generation.”

Hilal showed Al-Monitor around the camp, where we met Salem, 12, and asked him, “Do you like sports?”

“Yes,” he said, “I registered my name with the coach and I’m waiting to start the training.”

Salem’s family is from the Aleppo countryside, and he is the oldest of three siblings. After their home was bombed by Syrian regime forces in 2013, they moved to the camp on the border. Salem said, “I would like to learn to defend myself and to do combat training so I can protect my family and my brothers if someone attacks us. I have not finished my studies as I lost two years as a result of the fighting near our village. Then my father took us to live in this camp, and I am going to school again.”

A group of young people from the General Committee of Sports and Youth are preparing to open soccer training centers for 140 children in Aleppo city. The centers — named after famous Syrian soccer players including referee Alaa Mrouh, former Union Club player Yousef Shibli and Firas Tate, who plays for the Freedom Club and is a former member of the Syrian soccer team — are providing the children with uniforms, soccer balls and other training equipment.

Mrouh, who is a member of the General Committee of Sports and Youth in Aleppo and the head of the children’s training centers, told Al-Monitor, “We can offer a lot to the children by playing soccer and refereeing if we receive the necessary financial support. Most of us do not have jobs, so many athletes are leaving sports in search of paid work. … The committee’s administration has just secured enough money for six months from a Turkey-based civil organization. This was good news for us. We have started telling people that the centers are now accepting applications and we have prepared lists of athletes who can work as trainers and supervisors.”

He added, “It may take some time for us to buy supplies because they are not available in our areas. We might have to buy them in Turkey. But the work is ongoing to teach soccer to groups of children. This is a noble and enjoyable task and it restores our soul despite the insane bombardments and war waged by Bashar al-Assad’s regime on us, the civilians in Aleppo.”

Abu Jamal, an elementary school teacher in Aleppo's al-Zabadieh neighborhood, which is controlled by the Free Syrian Army, told Al-Monitor, “My son and his friends participated in the Aleppo chess championship in late 2014. He participated in soccer games. I feel that no matter the danger to our lives, we must give our children a chance to play and live.”

The sports training centers have been in operation since Nov. 22, and children are racing to join the activities they offer. One child interviewed in the camp dreams of becoming Captain Majid, a cartoon sports series popular with Syrian children; another dreams of becoming the next Lionel Messi. Despite the pain, sports remain a source of hope for Syrian athletes of all ages.