The Shoft Tahrosh movement in Egypt has launched campaigns that teach women how to defend themselves, following a steep increase in sexual harassment. 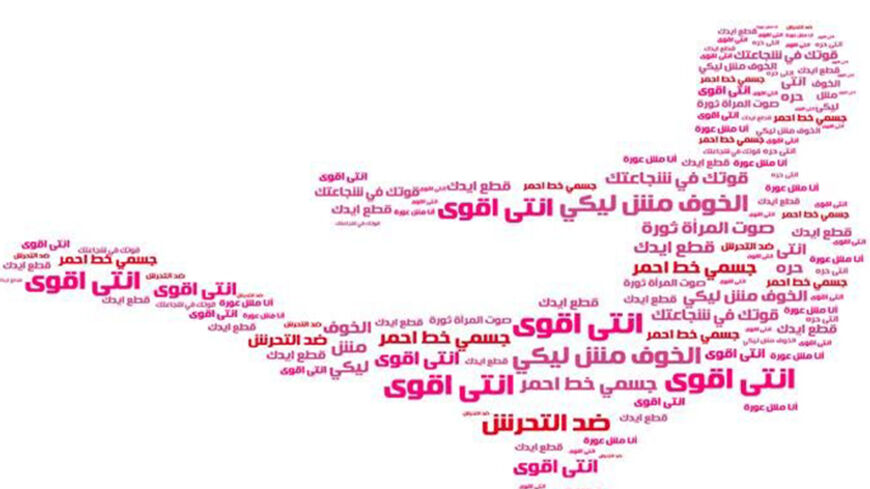 The logo for the Inti Aqwa (You Are Stronger) campaign shows a woman's form in a martial arts pose made of anti-harassment slogans. - Twitter/entyakwa

Sexual harassment in Egypt is on the rise. Many Egyptian women suffer from this phenomenon that violates a woman’s body and freedom. But many are trying to fight back and root out sexual harassment.

A movement called Shoft Tahrosh (I Saw Harassment) is fighting sexual harassment at the legal, psychological and societal levels. The latest in this fight are the Inti Aqwa (You Are Stronger) and Aman campaigns. But the question is whether these campaigns add a new dimension to the fight against sexual harassment.

The state has been making an effort to address sexual harassment. In September, the authorities created a special Interior Ministry unit to face the acts of violence against women based on the protocol of cooperation between the Interior Ministry and the National Council for Women. It deployed security patrols in all cities and streets and used cameras to monitor harassment. It presented to parliament an anti-harassment bill on the second anniversary of the January 25 Revolution.

But all these attempts failed. Sexual harassment has worsened — hence, the self-defense campaigns.

The most important of those campaigns, Aman in Cairo and Inti Aqwa in Alexandria, have set up training programs to protect the victims and their families from the dangers they are facing. The goal of these campaigns is to fight sexual harassment in all its forms and promote self-defense.

Both campaigns train women on how to defend themselves and provide them with specialized psychological and legal support. Inti Aqwa’s slogan is “Be the world’s mind and fight harassment," and that of Aman is “I am not cheap.”

Sarah Arafat, the media spokeswoman for Inti Aqwa, told Al-Monitor about the importance of psychological support and rehabilitation for victims before and after the harassment to break the fear barrier. “We found that awareness is no longer enough," she said. "What’s more important for women is to fight harassment themselves, because a woman’s body is not a commodity. The trainers have been subject to physical or verbal harassment, too.”

She added, “The lack of security and ineffectiveness of the seminars given by the victims has encouraged them to set up the campaign. … The campaign has succeeded in achieving its objectives in terms of giving the trainees great confidence in themselves by breaking the fear barrier.”

This campaign's importance stems from the fact that girls are dealing with harassment without anyone helping, and criticism that self-defense is a form of violence. Arafat continued, “This campaign is different than the rest in that it doesn’t aim to raise awareness against harassment but addresses the victims instead.”

In the same context, Ghaida Sabri, an Aman founder, told Al-Monitor that the state is not helping to solve this phenomenon but is making it worse. Moreover, according to Sabri, victims are verbally harassed by the police and treated as if they are guilty. They are often forced to withdraw their statements. Sabri stressed the importance of training the victim to defend herself without inciting her to violence.

Earlier, the UN’s women committee released a video clip that sheds light on sexual harassment in Egypt. The video’s title is “Put yourself in her place instead of blaming her.” The video shows that 90% of Egyptian women — a figure several studies refer to — are sexually harassed in public.

Athar Wahida, a student at the College of Arts and one of the trainees, told Al-Monitor that she has been harassed and the incident made her stay home for a long time. She decided to defend herself and fight harassment. She angrily added, “A woman is not a weak creature. She must take her rights by force. … I have become so violent in responding to harassment that people are afraid to approach me, because I'm not only defending myself, but all my peers as well.” Wahida concluded, “I am very satisfied. So I encourage girls to train to protect themselves, because harassment has become a phenomenon that haunts every girl in Egypt.”

For her part, Asra Saleh, who works in marketing, told Al-Monitor that she will join the campaign because she gets harassed daily. Saleh has filed several harassment claims but was forced to retract many of them because of societal pressure. And the police often do not treat her claims seriously. Despite that, she thinks that filing a harassment claim is very important, in addition to martial arts training for women, because they allow the girls’ voices to be heard.

Azza Kamel, president of the Centre for Appropriate Communication Techniques for Development (ACT) and a feminist activist, said in an interview with Al-Monitor that she welcomed the spread of those campaigns because women should be able to defend themselves at any time. “These campaigns are not new. The Shoft Tahrosh campaign had previously trained girls and conducted awareness campaigns that attracted volunteers to warn that harassment is a crime and is rejected by society,” Kamel said.

It should be said that self-defense is the best way to deal with sexual harassment, which has become a real threat to the moral fabric of Egyptian society. Harassment in Egypt is getting worse, and it is especially acute during demonstrations. Sexual harassment should not be tolerated, especially in light of the slow government action against it and the state's preoccupation with fighting terrorism in Egypt and ignoring social problems, of which sexual harassment is one of the worst.