Faten al-Naqla, a Gaza-based kung fu instructor, took it upon herself to train women in self-defense amid the rise of women’s deaths at the hands of their husbands. 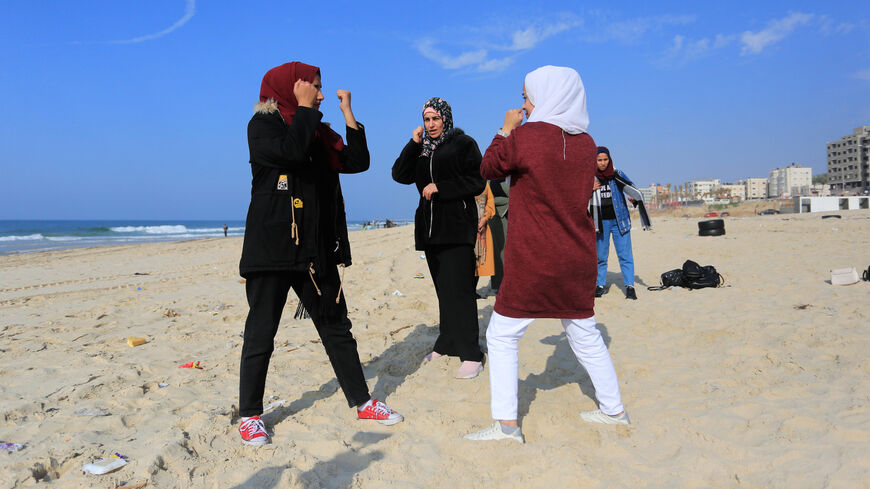 GAZA CITY, Gaza Strip — Years ago, Faten al-Naqla, chair of the Women's Board of Directors of the Palestinian Wushu Kung Fu Federation, received intensive kung fu training from her husband and trainer, Sameh al-Naqla, to gain the confidence and ability to defend herself.

In light of the increasing number of deaths among women following severe beatings by their husbands in the Gaza Strip, Naqla started thinking about training other women to defend themselves.

According to 2021 data from the Institute for Palestine Studies, social violence in Gaza reached 41% in 2019, compared to 20% in the West Bank. With regard to women who have been subjected to spousal violence, psychological violence reached 76%, physical violence 34% and sexual violence 14%.

Most recently, on Feb. 19, a 31-year-old woman from Gaza City was beaten to death by her husband. This prompted Naqla to initiate the kung fu self-defense training, calling on all Gazan women to head to Deir al-Balah beach in the central Gaza Strip, where she gives the classes.

Women pay a modest sum of money to attend the training on the beach — depending on the type of training — where Naqla rents a small area for the classes.

Naqla, who was surprised by the large number of women who responded to her call, does not care about the criticism she has received, claiming that training women in self-defense aims to encourage them to attack their husbands. “Any decent man would encourage his wife to learn self-defense because violence is everywhere, not only between couples,” she told Al-Monitor.

Monallah al-Duraimli, 20, from Gaza City, told Al-Monitor that she is very interested in acquiring kung fu skills so that she could defend herself if she ever needs to.

She pays no attention to the criticism she received for training with Naqla. On the contrary, she said it motivates her to continue. “People will talk, and we need to make defending ourselves a priority in light of the increasing violence rates,” she noted.

Magda al-Balbisi, freelance researcher on women’s affairs and a women's activist, told Al-Monitor that it is very important for Palestinian women to learn self-defense should they ever be exposed to social or family violence.

She said that self-defense falls within the framework of protection mechanisms that feminist organizations and civil society organizations can work on in general. “Women and girls have a right to defend themselves if they are ever exposed to harassment or any kind of violence. Families must encourage their daughters to practice self-defense, kung fu and karate because violence cases have been increasing recently.”

Mohammed Salim, who coaches the Palestinian national taekwondo team in the southern governorates of Gaza, told Al-Monitor that the younger generation of women (under 14 years) is increasingly looking to learn self-defense.

He regrets that the older generation never paid any attention to such sports due to cultural and societal restrictions, as well as the lack of awareness.

“Organizations concerned with the protection of women ought to establish special classes that the community finds acceptable. We, as coaches for the taekwondo team, are currently trying to do this and train women so they can teach other women self-defense,” Salim noted.

Nelly al-Masry, freelance researcher on sports affairs, told Al-Monitor that self-defense classes such as karate, taekwondo and kung fu have been available at sports clubs in the Gaza Strip for over 20 years. “The Gaza Sports Club was one of the first to provide such classes for women. Many young women have high-ranking belts in self-defense sports,” she said.

However, she criticized feminist organizations in Gaza for their lack of interest in sports projects, noting that 10 years ago, the Palestine Olympic Committee sent an official letter to some of these organizations in order to cooperate in the field of women’s sports. According to Masry, the responses were unfortunately negative due to the different funding agendas that focus more on violence against women, inheritance issues and so on.