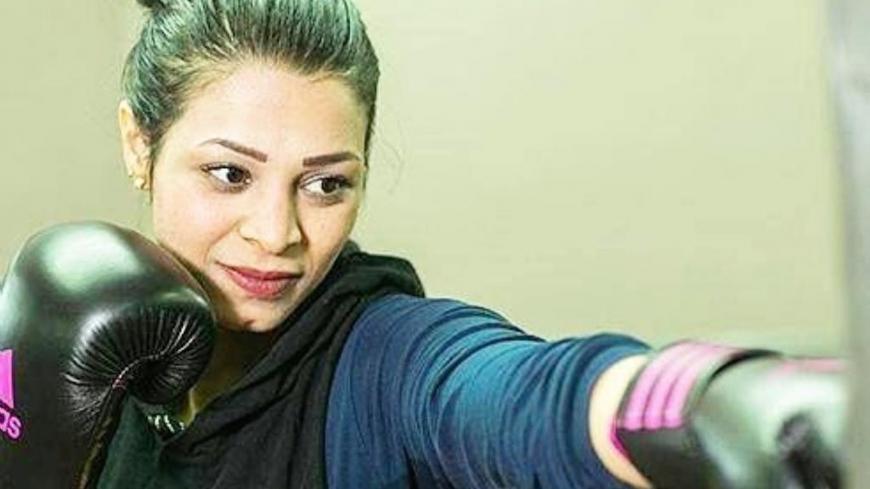 Aya Saeid is seen training in Cairo in this undated image. - FACEBOOK/Aya Saeid

“I started in 2000 as a karate player and took the brown belt. Then I joined the Kung Fu national team and won competitions with the team. When I succeeded in the sport, I decided to continue with them as well as join other similar sports,” Aya Saeid, 29, told Al-Monitor.

Then, Saeid, aka Sheklesa, met captain Mohamed Abdel Hameed who started the MMA sport in Egypt and established the Top Team. “He is a great mentor and I have always looked up to him. He trained me until I competed in world competitions,” Saeid said.

The Top Team is a mixed martial arts team, trained by Abdel Hameed. Saeid is the only woman in the team and the first woman to enter the sport in Egypt.

Saeid, who has a husband and a daughter, faced many challenges once she decided to practice the sport, as she was living in an underprivileged and very conservative neighborhood where she was subject to a lot of criticism.

“They were telling me that I am like a man and not a woman. At times I got deeply depressed, but my father always supported me and he encouraged me to keep going,” she said.

Saeid is not only an MMA fighter, but she is also an international coach. Three years ago, she started teaching courses that qualify women as fighters and coaches.

She also taught several courses in self-defense to help girls defend themselves against sexual harassment or any kind of violence.

“I do not only want to take part and win international competitions, but I also want to encourage other women who have a passion to follow suit and set up the first [female] MMA team in Egypt,” she said.

MMA is a relatively new sport that started in the United States in 1993, and it mixes other types of martial arts with all modes of striking and wrestling.

Gloves and a toothpick bo staffs are the two permitted tools for an MMA fighter during a match, which consists of three rounds of five minutes each with a minute break in between.

The match ends with a knockout, surrender or a decision by the referee.

“It is not an easy sport. It is very hard and it needs passion, but I have seen many women who are passionate about MMA,” Saied said. “Women should be given an opportunity to enter any field they like because they can do anything as long as they have the passion for it."

According to the 2015 Global Gender Gap Index, Egypt ranks low in gender equity compared to other countries worldwide.

The index, which measures disparities between men and women across countries, ranked Egypt at 136 out of 145 countries. It reported that women have significantly lower participation in the labor force than men — 26% versus 79%.

“Women are still underrepresented in workplaces in general and sports in particular and the increase of their representation would not only benefit those women socially and economically but also would benefit the state,” said Randa Fakhr el-Deen, a women's rights activist and executive director of the Union on Harmful Practices Against Women.

She told Al-Monitor that having those women fighting for a place in sports and the workplace would gradually break the social stereotypes and increase women’s representation in Egyptian society.

Saeid aspires to have her own academy where she can train more women in the sport and enable them to defend themselves in any situation of violence or sexual harassment.

A 2017 Thomson Reuters Foundation poll found Cairo to be the most dangerous megacity for women, and a United Nations' survey in 2013 found that over 99.3% of women had experienced harassment in Egypt, a country where women have long felt disadvantaged.

“I want women to not only practice the sport but also make it part of their lives as a means of defending themselves in any situation,” Saied concluded.