No justice for Turkish women who kill in self-defense

Turkish courts rarely offer leniency to women who have killed their husbands in self-defense, mostly because the women are too ashamed to recount tales of their abuse. 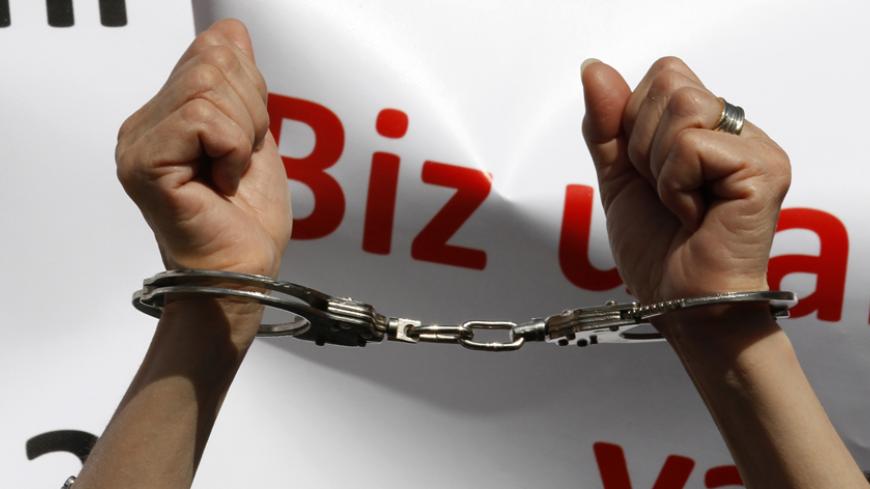 A woman raises her handcuffed hands during a protest against domestic violence, Ankara, April 14, 2011. - REUTERS/Umit Bektas

In Turkey, the killing of women has become a major problem. No less than 294 women were killed in 2014, and 60% of them perished at the hands of husbands and boyfriends, according to the We Will Stop Women Homicides Platform.

On the other side of the coin, there are also women who kill their husbands. No statistics exist on the issue, but several research papers are available. One such study, conducted in 2011 among convicted women, was written by myself, Ozlem Albayrak of Ankara University’s faculty of political sciences, and psychologist Alp Ardic. We interviewed 30 women who, jailed for murdering husbands or boyfriends, offered ample insight into the phenomenon. The findings were later published as a book whose title can be roughly translated as “At the End of the Rope.”

All interviewees said they were abused by the men they murdered. Some spoke of physical violence and others of sexual abuse, such as being forced to participate in group sex, prostitute themselves or eat feces. Almost all the murders were spontaneous. In most cases, the women used objects that were available to them at that very moment. They were all married off at a young age, uneducated and unskilled. This pattern suggested that most of them did not view and use violence as an instrument, but were compelled to resort to it as a result of a common socio-economic experience.

To escape the cycle of violence, the women recounted how they first sought refuge with their families. But true to the Turkish saying that a woman “who leaves the family home in a wedding gown returns only in a shroud,” parents would send them back home. Some of the women then tried the police, but would again be sent away, with advice to “kiss and make up.”

Out of the 30 women we met, only one had managed to take her husband to court for physical abuse. This time, it was the judge who sent the woman home with advice to “kiss and make up.” Some of the women said they had attempted suicide.

Men who kill wives generally claim they have acted out of jealously or in momentary fits of anger. In contrast, the women’s stories suggest they act out of helplessness following numerous unsuccessful attempts to escape their violence-ridden lives.

Men often get reductions in their sentences if their defense counsel cites that they were "provoked" into committing the crime. In 2008, for instance, a man from northwestern Turkey who strangled his wife using her lingerie had his sentence reduced from life in prison to 15 years after he said he had acted out of suspicion that the woman was having an affair with his cousin. The list of "provocation" reductions, justified on grounds of jealousy, honor and patriarchal traditions, is endless.

In contrast, our interviewees recounted how they were barely able to speak out in court. Though they cited various reasons, the underlying element was common: shame. An elderly woman who was forced to eat feces — not once or twice but throughout her 38-year marriage — said she felt so ashamed that she could say nothing in court and got a life sentence for murdering her husband.

Another woman killed her husband after he forced her to prostitute herself. She recounted how she stayed silent in court to keep the truth from her four adult children who were present in the courtroom and knew their mother only as a housewife. Some women were reluctant to talk even about the physical abuse they had suffered.

In sum, we saw that male killers were almost boastful about their violence in court, while female killers withheld their stories — both because of the shame they felt in court and their sloppy interrogations by police and in court. The women were questioned mostly by male police officers and had to speak of their plight in crowded courtrooms. They feared being stigmatized as shrews, criminals or sexually promiscuous women.

In early February, however, Turkey’s Appeals Court issued a ruling that gave rise to hope that things could be changing. The judgment pertained to the case of Gulfidan Kusoglu, a 24-year-old woman who strangled her husband in 2011. According to her account, the couple was watching a movie on TV that included a scene showing a male character undress. She said she closed her eyes — apparently in anticipation of an angry reaction by her husband if she were to watch — yet her husband still grew furious, claiming she enjoyed watching the scene. She said that he beat her up and tried to kick her out of the house after stripping her naked. She then described how she took a moment to light a cigarette before strangling him with the cable of an electric heater in their living room.

In contrast to other women, Kusoglu was articulate in court, describing in detail how she was battered. The court ruled that she had acted in self-defense and released her after six months in custody. On Feb. 6, the Appeals Court upheld her acquittal.

The Appeals Court’s decision is significant. It shows that women are now speaking out, overcoming the shame of recounting their abuse, and that the courts are validating their testimonies. The increasingly vocal debate on violence against women in Turkey is certainly a major factor in the changing attitudes. Turkey is trying to overcome patriarchal mentalities and transform into a culture where all types of violence against women are rejected and condemned. It is important to note, however, that sexual violence continues to be an unspoken taboo.

No doubt, preventing such murders from happening is the real issue. Victims of domestic violence may be banished from family homes, but the state and society could grant them protection. Police stations could task female officers to take the complaints of women to make sure they feel comfortable when relaying their stories. The police could take the complaints more seriously and take measures to keep the violent men away from the victims. Similarly, prosecutors and judges could be extra diligent in cases involving violence against women. Employing those measures requires neither legal amendments nor lengthy bureaucratic procedures. What is needed is simply a more caring and responsive attitude on the part of the police, prosecutors and judges. This will ensure that the state’s helping hand reaches men and women before they get killed.