Israel prepares for 'May Madness'

Israeli sources believe President Donald Trump will abandon the Iranian nuclear deal in May and are analyzing the possible outcomes of a number of other events anticipated that month. 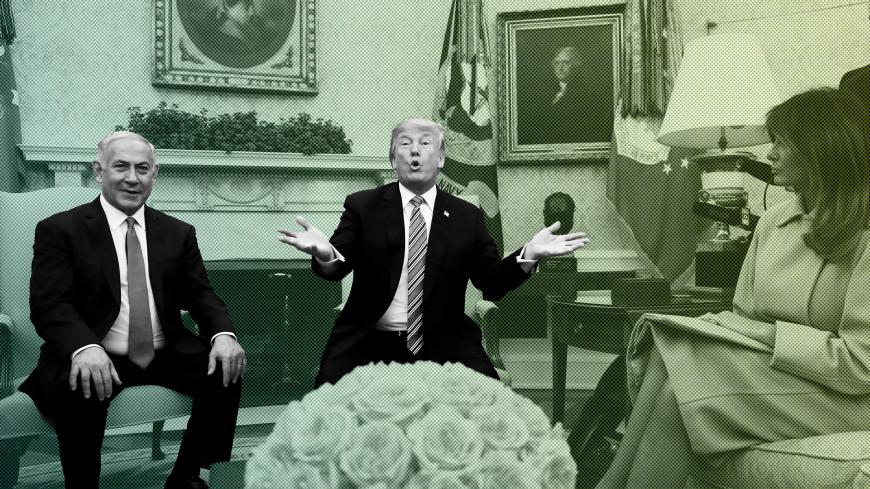 The month of May is shaping up to be “May Madness,” a take on the “March Madness” of collegiate basketball. According to Israel’s intelligence and political echelons, President Donald Trump’s policies will be tested in May on numerous fronts that have implications for Israel’s national security. To these assessments one must add the mounting rumors, mainly in the Arab world, about a possible aerial assault — by the United States or Israel or both of them together — against Iranian forces in Syria. There is no evidence, however, to support the rumor. No official source has mentioned an anticipated attack, but the issue has been discussed intently in almost all the nerve centers of the Middle East.

Prime Minister Benjamin Netanyahu has told the Security Cabinet his opinion that Trump will probably withdraw from the nuclear agreement with Iran before a May 12 deadline on sanctions waivers for Iran. It had been said that Israel faces a dilemma concerning Iran's growing presence in Syria: Should it carry out a military strike to push the Iranians back from Israel’s northern border or simply swallow the bitter pill and come to terms with the new situation? According to Western intelligence assessments, Israel is vacillating on the matter. Is enforcement of the red lines regarding Iranian involvement in Syria (that is, a permanent presence and providing Hezbollah advanced weapons) worth the danger and tremendous destruction that would be caused by initiating a war?

On Netanyahu's return from a US trip this month, during which he met with Trump March 5, the prime minister announced that he had secured historical contributions toward Israel’s “national security.” The educated guess is that Netanyahu had received some kind of vague promise from Trump on withdrawing from the Iranian nuclear agreement or maybe even some kind of cooperation regarding military action against Iranian forces in Syria.

There is great satisfaction in Jerusalem over the change in US policy on Iran thanks to Trump. According to an intelligence source who spoke on the condition of anonymity, recent Israeli intelligence reports assess, “Instead of policy leaning toward an arrangement with Iran and viewing the country as a strategic partner, the Americans now classify Iran as a key threat to their interests. Thus, they strive to change the nuclear agreement and oppose Iran’s growing involvement in the region, which involves disseminating terror and launching precision missiles. Perhaps they [the Americans] are even aspiring toward a change of regime in Iran.”

In Israeli eyes, these changes follow a pattern: numerous, fundamental changes in US foreign policy in Trump’s first year in the White House. With regard to the Palestinians, the Americans have abandoned the age-old paradigm of the two-state solution as the only possible arrangement and one only achievable via bilateral negotiations between Israel and the Palestinians. Instead, the United States involves Arab countries, does not commit itself to any specific final agreement configuration, expresses a clear stance on core issues (such as Jerusalem) prior to negotiations and promises to think “outside the box.”

There has also been a sharp change in US policy regarding North Korea and emerging changes in policy regarding Iraq and eastern Turkey (namely the US approach to Ankara's conflict with Syrian Kurds). In addition, whereas the United States had earlier focused only on fighting the Islamic State in Iraq and Syria and had abandoned the Middle East battlefield to Iran and Russia, the Americans (under Israeli pressure) are now examining deeper involvement in halting Iranian expansionism, among other changes.

According to Israeli assessments, May will feature “opening shots” being fired in the above arenas. On May 12, Trump will have to decide whether to renew Iranian exemption from US sanctions and in general to make a final decision regarding the nuclear agreement. Then in mid-May, the US Embassy in Israel is slated to move from Tel Aviv to Jerusalem (though, in fact, only the ambassador’s residence will be transferred, marked by a ceremonial event). Trump and North Korean leader Kim Jong Un are expected to hold a “historic” meeting somewhere in May or June, barring unexpected developments. Elections are planned for May 12 in Iraq, where the choice is between a pro-Iranian stance and a more independent approach. Elections are also planned in Lebanon, on May 6.

Israel is keeping a close eye on all of these events — analyzing what’s happening now and attempting to predict what will happen down the line — in an attempt to identify the direction that Trump might take and the chances of him implementing new policies in direct opposition to the policies of his predecessor.

To all this, one should add the heating up of the security situation on Israel’s southern front. On March 17-18, the Israel Defense Forces (IDF) destroyed two Hamas tunnels, one of which had been demolished in 2014 during Operation Protective Edge and that Hamas had attempted to rebuild. Defense Minister Avigdor Liberman has already declared that by the end of the year, the once-feared Hamas tunnel will be a thing of the past.

This is already raising security tensions on a daily basis. In the past week, several demolition charges exploded on the border fence between Israel and Gaza. In another incident, two IDF soldiers were wounded. The odds of a new eruption of violence along the lines of the 2014 hostilities have doubled in recent weeks. The deteriorating humanitarian situation in Gaza is contributing to the odds.

Recent weeks have also brought an increased number of violent acts against Israelis on the other Palestinian front, on the West Bank. On March 18, a Palestinian murdered an Israeli guard. Two days earlier, a vehicular ramming attack by a Palestinian left two IDF soldiers dead.

“All the signs point to a rapid deterioration in the checks and balances that had previously maintained peace and quiet on the various fronts,” a highly placed Israeli source told Al-Monitor, speaking on the condition of anonymity. “Also, the fact that we are in the President Mahmoud Abbas twilight stage, with all the rumors about his [failing] health, and the impasse reached by Hamas in Gaza — all these have not contributed to calming the territory.”

Will the factors discussed here combine to create the “ultimate tornado” that drags the entire region into war? At the moment, it seems unlikely. Although Netanyahu may consider such a path, he is deterred by being up to his neck in criminal investigations that probably will end his stint in power before he can jump into a war.

Nevertheless, one must not forget that Netanyahu also understands that his era will end soon. Will he chose to retire from public life in a storm and push Iran from Israel's northern border as a farewell gift to his people? Those who know him well do not think the odds are that he will, but as always with the Middle East, one should never say never.