Ahead of the 2020 US presidential elections, President Donald Trump might decide to back Israel militarily, if it decides to attack Iran. 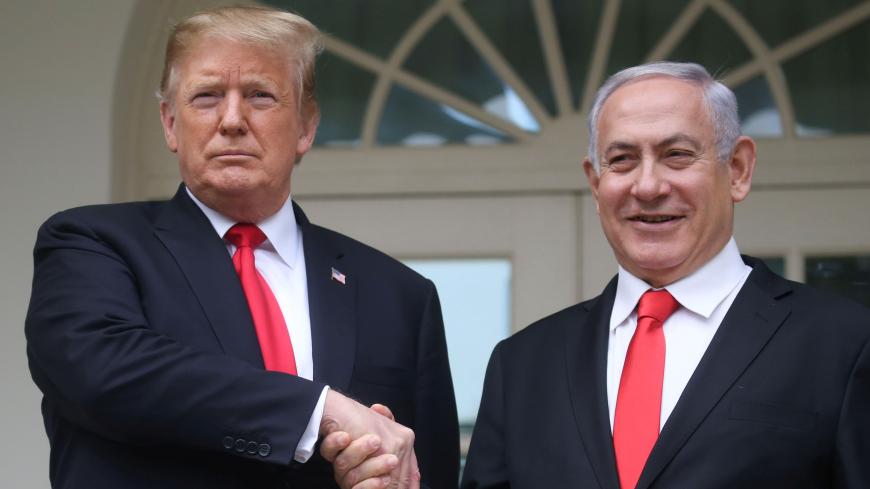 US President Donald Trump shakes hands with Israel's Prime Minister Benjamin Netanyahu as they pose on the West Wing colonnade in the Rose Garden at the White House in Washington, March 25, 2019. - REUTERS/Leah Millis

The question of questions is, will history repeat itself, and will 2019 be a repeat of summer 2012? In the summer of 2012, Israel’s highest security-diplomatic echelons became engaged in a clash of the titans on the issue of attacking the Iranian nuclear project. “The Israeli military option is still alive and kicking; it has even upgraded itself a lot in the years that have passed,” a very senior Israeli diplomatic source told Al-Monitor on condition of anonymity. “The question is, what will we do with it if and when we reach the moment of truth? Circumstances have changed here since that summer of 2012, the eve of US presidential elections when the president running for election was called Barack Hussein Obama. This time, the president’s name is Donald Trump; that means the rules of the game have changed. If only we knew what, exactly, are the new rules.”

We recall that Prime Minister Benjamin Netanyahu wanted to deliver a military blow to the Iranian nuclear project, to the entry of Iran to what Defense Minister Ehud Barak then called “the immunity zone.” The deadline picked was the summer of 2012, the eve of President Obama’s reelection. The high-ranking security people continued to argue that Israel had no chance of securing important achievements without American participation in the military attack. Thus, in those days the discussion centered around the chances of “dragging” the Americans into the fray even in its advanced stages. When Barak returned from a circle of meetings in Washington at the time, his view was that if Israel would attack, the Iranians would retaliate and the Americans would not be able to remain on the sidelines. Barak felt that the Americans would join the war, at least with regard to their air power. On the other hand, then-Mossad head Meir Dagan also returned from a series of discussions in Washington and argued that Barak was leading the Cabinet astray. Dagan even presented evidence to support his view, such as the text of the defense minister’s conversations with the relevant sources in the United States. One way or the other, Barak did a flip-flop, changed his opinion and stopped advocating the attack option. This left Netanyahu alone in the fray, causing the prime minister to backtrack from the military option. At least temporarily.

And now, all of this has boomeranged and returned in a new configuration: Iran is dismantling the nuclear agreement in stages, at the very same rate that the head of Israeli intelligence had predicted: First they ramped up uranium enrichment to the level of 3.67%, then broke the 300-kilogram (661-pound) limit on its low-enriched uranium stockpile. In the final third stage, probably in two months’ time from now, the Iranians will raise the enrichment level of uranium to 20%. This will bring the ayatollah state to the jump-off point for a nuclear bomb.

Despite the fact that this process was predictable — once the Americans had abandoned the nuclear agreement in May 2018, the agreement crashed de facto — the pressures on Israel’s security elite went sky-high in recent weeks. The "hour of truth" is approaching quickly, and no one really knows where the sides will go now. The key question remains unsolved: What will Trump do at the moment of truth, if and when it emerges that Iran has, indeed, started dashing to the bomb? Will Trump order a massive aerial assault to destroy the nuclear infrastructure? Or will he lose interest, go through the motions of convening a summit with Iranian President Hassan Rouhani, then continue on to the next threatening adventure when the Shiite state transforms into a nuclear power?

At the moment, Trump is influenced by his close advisers (mainly John Bolton and Mike Pompeo) who have adopted a hawkish stance and are not deterred at the thought of military involvement (at least aerial involvement) vis-a-vis Tehran. But the US president also has other mentors (some political and some from the media world) who claim that getting involved in a military adventure on the eve of elections would greatly reduce Trump’s chances of reelection to a second term of office.

An intriguing question is, what will happen if Israel is the one to inflict the initial assault on Iran’s nuclear project, in the event that Iran starts its dash to the bomb? Under such circumstances, Trump would not be the one who initiated the war; it would not be his sovereign decision. But his main ally, Israel, would find itself on a cruel front vis-a-vis Iran, Syria and Hezbollah’s immense stockpile of rockets and missiles. Many salient defense sources in Israel feel that at such a point the odds are good that Trump would not remain on the sidelines. At stake is not only Israel’s security and welfare, but also the commitment of tens of thousands of evangelical voters whom, the American president hopes, will again stream to the voting booths for Trump’s reelection.

Israel has transformed this evangelical repository into a tremendous electoral-diplomatic-strategic asset over the last three years, vis-a-vis Trump’s administration. Netanyahu and his ambassador to Washington, Ron Dermer, have great influence over the evangelical preachers. The relationship between Israel and this American Christian-messianic faction has been deepening and catching up to Israel’s relationship with the American Israel Public Affairs Committee. According to sources at the apex of Israel’s most senior echelons, it has been the evangelical card that prevented Trump from whipping out his “deal of the century” until now. This is in order to avoid harming Netanyahu’s chances of reelection.

But evidently, the devil is in the details and the timing of a possible Iran hit is crucial. If it happens after Trump’s reelection, the odds are good that the president, who will have nothing to lose, will rush to help Israel immediately. The question is, what if Israel delivers the blow before November 2020? No one has an answer to this question, probably not even Trump himself.

One thing is sure: The considerations and analyses in Israel surrounding the Iran issue at this point in time are completely different than what prevailed in the summer of 2012. As opposed to the Obama case, this time nothing is known in advance and everything, but everything, is open. One way or another, anyone who thought that the issue of a possible Israeli attack on Iran has long since been removed from the agenda is welcome to catch up. It is returning.