Iranian mistrust of Russia surges as Syrian war winds down

The Iranian media increasingly reflects fears and mistrust of Russian intentions in Syria. 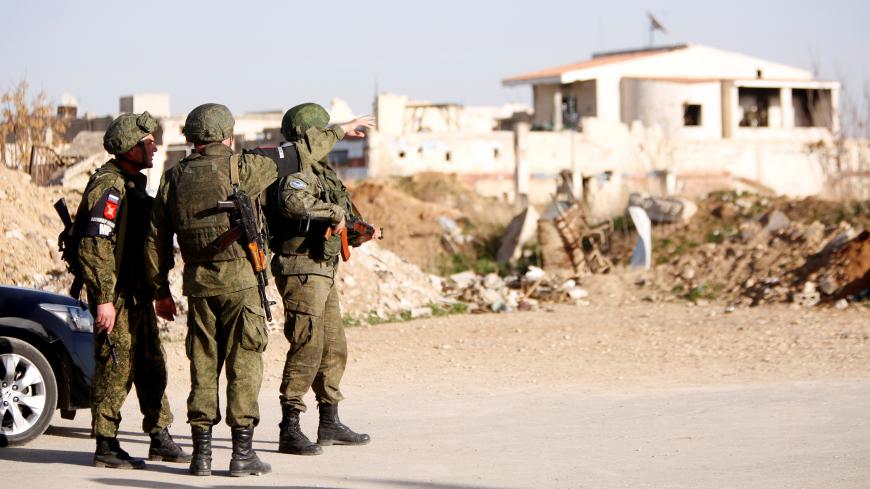 Russian soldiers are seen along a new corridor of Jisreen-Mleha road where they expect people to arrive from eastern Ghouta, Damascus, Syria, March 8, 2018. - REUTERS/Omar Sanadiki

In Iran, the media's negative view toward Russia is intensifying amid speculation that Moscow is bypassing Tehran in Syria.

Unfavorable Iranian views of the Kremlin go back to the early 1800s, when the Russian empire defeated the Iranian army in two consecutive wars, leading to the cession of major territories to Russia. Under two treaties between the two countries in 1813 and 1828, Iran ceded Dagestan, eastern Georgia, modern-day Armenia, the southern parts of current-day Azerbaijan, including Nakhchivan, and Igdir province, now part of Turkey.

Negative views toward Moscow persisted into the 20th century. In 1965, 14 years before the Islamic Revolution that toppled the US-backed Mohammad Reza Pahlavi regime, Ayatollah Ruhollah Khomeini, the founder of the Islamic Republic, slammed the Soviet Union along with Britain and the United States as enemies of Iran, even calling the Soviet Union filthier than the other two.

In the years after the revolution, anti-Moscow sentiment persisted as Iranians saw Russians arming Iraqi dictator Saddam Hussein, who had started a war with Iran, a deadly war that lasted eight years and killed many Iranians.

While the two countries had a rapprochement of sorts after the fall of the Soviet Union, the improving diplomatic ties along with Moscow’s supply of weapons to Tehran did not remove the negative character of Russia in the view of ordinary Iranians.

There have also been other issues harming ties between the two countries, at least in the views of many Iranians in recent years. Russia’s constant delay in completing the Bushehr nuclear power plant and delivering the S-300 missile defense to Tehran are among these issues. However, despite long delays, the Russians eventually did fulfill their commitments. Even during the nuclear talks, there were many reports and much speculation in Iran about a supposed motive for Russian leader Vladimir Putin to have the negotiations not reach a positive and lasting settlement so that the Russians could take advantage of the situation and use Iran as a card to extract concessions from the West.

Now, Iranians are suspicious of Russia’s role in Syria and what are seen as Russian attempts to bypass Iran, which has paid a steep price to keep President Bashar al-Assad in power in Damascus. Media outlets' reports seem to play into these fears and doubts of much of the public.

Of note, Reformist and moderate media outlets are generally in favor of reasonable ties with the West while broadly opposed to Russia, which in their view either blackmails Tehran or bypasses it. In contrast, staunch conservatives and hard-liners are staunch fans of Russia and consider it as part of their coalition against the United States.

The moderate conservative Tabnak news site, close to former Islamic Revolutionary Guard Corps (IRGC) chief Mohsen Rezaie, wrote Jan. 17, “Based on an agreement between Russia and Syria, Iran and Iranian companies have been partly put aside from the process of reconstruction and investment in Syria, and consortiums have even been established between Syria and Russia in a number of sectors, and if Iran wants to join the reconstruction process, it should [at first] talk to the Russians. This is not speculation but rather an issue that has been discussed in the government, and the Iranian government is deeply worried about this.”

The news site added, “Iranian Russophiles aren’t willing to speak about the breaking of promises by the Russians and their blows to Iran’s national interests. The Russians left us when UN resolutions against Iran were passed and didn’t deliver the defense systems when we needed them, and are now harvesting the [fruit of the] efforts of Iranians in Syria and are accompanying Saudi Arabia in Yemen.”

Qanoon wrote Jan. 18, “We shouldn’t allow Bashar Assad or any other person who is trying to stop Iran from [having a role in] the reconstruction and post-IS era [in Syria] to reach their goal. This is because a part of the national interest is tied to economic and financial issues.”

The daily emphasized, “That a [country] pays the price of fighting, and after the end of the conflict, [some] others come there [to harvest the fruits of Iran’s labor], is not an appropriate and honorable measure.”

Qanoon continued, “If the US is the Great Satan, Russia has a background full of betrayals of Iran and Iranians, and moving to be embraced by this country, which is only seeking its own interests, is costly.”

It seems as if the fears expressed in the Iranian media aren’t far from reality. On Feb. 17, former IRGC commander Yahya Rahim Safavi, now a senior military adviser to Iranian Supreme Leader Ayatollah Ali Khamenei, said, "The Islamic Republic must be reimbursed for the price it has paid in Syria, and the Syrians are ready to do that in oil, gas and phosphate mines. My assumption is that we paid a price, but [both] Iran and Russia became the winner of this scenario.”

Mentioning an agreement, which may by the one cited by Tabnak, Safavi continued, “The Russians have reached a 49-year agreement with Syria in which they will have a military base as well as political and economic gains. I think Iran can reach a long-term political and economic agreement with the Syrian government, so that we can get a return on the price we have paid; however, we [already] have [a share of the] exports from the phosphate mines of Syria.”