There is speculation in the Persian-language media that Russia and Israel are collaborating against Iran and that Tehran is reconsidering its partnership with Moscow in Syria. 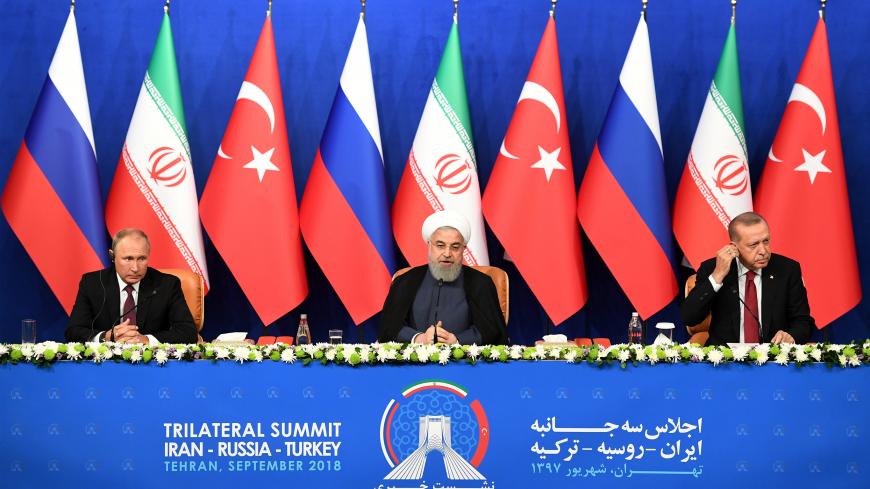 With the presidents of Iran, Russia and Turkey slated to attend a new round of Syria peace talks within the Astana framework on Feb. 14, the relationship between Tehran and Moscow — two main allies of the Syrian government in its eight years of fighting against rebel and terrorist groups — is facing a new durability test, mostly due to the Israeli factor.

On Jan. 21, Israeli warplanes carried out a series of strikes against alleged Iranian targets in Syria. The attacks were considered the most serious since the downing of an IL-20 Russian military aircraft by a Syrian air defense missile on Sept. 17. Russian officials interpreted the incident as the consequence of a deliberate attempt by the Israeli pilots to mislead the Syrian air defense by hiding behind the Russian surveillance plane. As a result, Moscow announced that it would provide Damascus with advanced S-300 missile defense systems and upgrade Syria’s air defense capabilities. However, the advanced Russian systems, seen by some observers as a potential game changer in Syria, were inactive during the latest round of Israeli airstrikes.

Head of the Iranian Parliament’s National Security and Foreign Policy Commission Heshmatollah Falahatpisheh criticized Moscow, saying, “If the S-300 systems in Syria operated correctly, the Israeli military would be unable to easily conduct airstrikes on Syria.” He went on to speculate that there seems to be coordination between the attacks and Russian-provided air defenses deployed in Syria.

Iranian public opinion, which has always been sensitive toward Tehran’s ties with Moscow, was further alarmed when Russian Deputy Foreign Minister Sergey Ryabkov said in a Jan. 26 interview that Israel’s security is a top priority for Russia, adding that he doesn’t see Iran and Russia as allies in Syria.

These developments led to speculation in the Persian-language media that Russia and Israel are collaborating against the Islamic Republic, and whether Falahatpisheh’s remarks mean that Tehran is reconsidering its partnership with Moscow in Syria.

To better understand the current state of the Iran-Russia cooperation in Syria as seen by Iranian political elites, it should be noted that at present there is no unified view regarding Iran’s involvement in Syria and its partnership with Russia in the Arab country. There are two main narratives currently competing on this issue.

The first, promoted mostly by the Reformist camp, is an economic view toward Iran’s presence in Syria that insists Iran must get seriously involved in the process of Syria’s reconstruction to compensate for its expenditures during the eight years of conflict in the country. During his recent official visit to Damascus in mid-January, Falahatpisheh touched upon this issue, saying that Iran’s financial aid to Syria “has to be settled in the relations between the two countries.” Behrouz Bonyadi, another Reformist member of parliament, took a similar position in a June. 28 speech, asking, “Why should we easily spend our national wealth elsewhere in the world without obtaining economic benefits?” He also criticized Syrian President Bashar al-Assad for “giving more weight” to cooperation with Russia on Iran.

This perspective maintains that as Syria moves toward the reconstruction phase, Iran and Russia are turning into rivals and the Russians are trying to deprive Iran from the economic benefits of the post-war period. Based on this logic, Falahatpisheh’s remarks on the S-300 system can be interpreted as Moscow having given a tacit green light to Israel to target Iranian interests, thereby weakening Tehran’s position to have a say in Syria’s future.

In contrast, the conservative camp as well as Iran’s military apparatus present another narrative based on a security-oriented view toward Iran-Russia ties in Syria. This narrative argues that regardless of the economic benefits the two parties will be able to gain in Syria and despite the potential areas of disagreement or even rivalry between them, cooperation with Russia has preserved Iran’s basic security and geopolitical interests in Syria. In this view, partnership with Russia has not only saved Syria from falling into the hands of Iran’s regional and transregional rivals, but has also prevented the spread of extremist terrorism throughout the region that could pose a direct threat to Iran.

Those who believe in the second narrative not only hail the Iran-Russia partnership in Syria as a successful model of security cooperation, but seek to expand that partnership to a wider framework of regional and international issues. A top military aide to Iran’s supreme leader, Major General Yahya Rahim Safavi, said Jan. 28 that Iran should form an alliance with Russia and China to deal with the “hybrid war” the United States is conducting against the Islamic Republic.

As for Russia’s ties with Israel, those with a security-oriented view seem to be trying to downplay their importance for Iran’s position in Syria. Conservative news agency Tasnim published an interview with Russian Ambassador to Iran Levan Dzhagaryan on Jan. 29 in which he claimed that Ryabkov’s remarks on Israel and Iran had been “distorted” by the Western media and that Iran and Russia are “strategic partners.” On the other hand, while most of Iran’s conservative media outlets preferred to remain silent on why the S-300 system did not operate during the Israeli strikes, Islamic Revolutionary Guard Corps spokesman Ramazan Sharif dismissed reports that Iranian bases were targeted in the attack.

All in all, the recent criticism by some Iranian officials of the role of Russia in Syria and its impacts on Tehran’s interests in the war-torn country do not mean that Iran is in the process of revising its partnership with Russia. Instead, the different Iranian positions are mainly the result of different viewpoints toward the nature of Iran’s involvement in the Syrian crisis. In fact, as recently argued correctly in Al-Monitor, both Tehran and Moscow are well aware of their points of convergence and divergence in Syria, but at the same time try not to let disagreements hinder their cooperation in areas of mutual benefit.