Mosques and churches in Egypt are raising awareness of the rationalization of water use, but Egyptians are divided over their involvement. 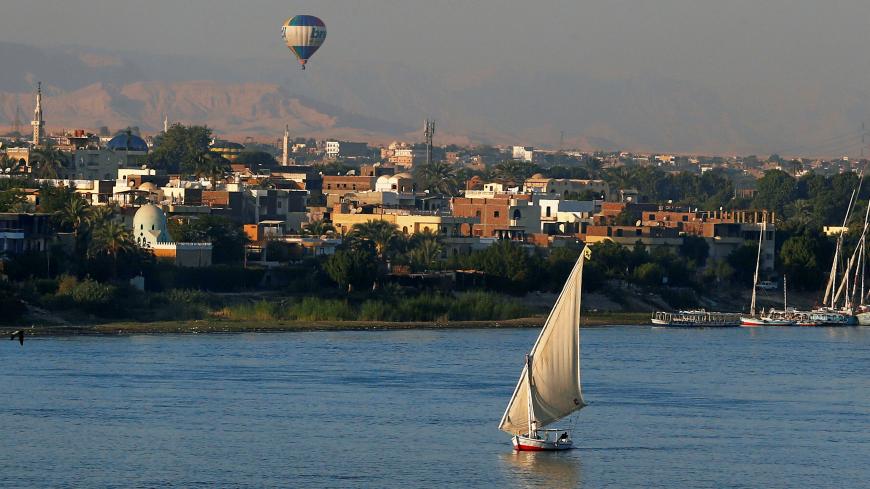 A balloon is seen above the Nile River as boats wait for tourists, Luxor, Egypt, Dec. 14, 2016. - REUTERS/Amr Abdallah Dalsh

Prior to becoming Egypt's president, then-Defense Minister Abdel Fattah al-Sisi met July 3, 2013, with representatives of the political forces to agree on the steps to oust President Mohammed Morsi and the Muslim Brotherhood from rule. The meeting was also attended by Sheikh Ahmed el-Tayeb, the grand imam of Al-Azhar, as well as Pope Tawadros II, the pope of Alexandria and patriarch of the See of St. Mark.

Despite the overthrow of the Muslim Brotherhood, which is seen by many in Egypt as an anti-civil movement seeking to establish a religious state, religious institutions are still very much present in every strategy or plan set forth by the state, the latest being the strategy of rationalization of water use.

On Feb. 6, the Egyptian government set up a governmental committee called the Water Conservation Committee, made up of Minister of Agriculture Abdel Moneim al-Banna, Minister of Water Resources and Irrigation Mohamed Abdel Ati and Minister of Religious Endowments Mohamed Mokhtar Gomaa, to develop a strategy to this effect.

In fact, the Ministry of Religious Endowments appeared to be the most involved in the strategy’s activities and action plans, including the most recent joint workshop between the water program at UNICEF Egypt, the Ministry of Water Resources and Irrigation and Egypt's Holding Company for Drinking Water and Sanitation.

Al-Azhar is seen as a main partner for the Religious Endowments Ministry in the management of the mosques. Al-Azhar graduates and holders of certificates from the institution are the only ones allowed to perform the khutba (public preaching) with the approval of Al-Azhar. Churches are also under the supervision of the Ministry of Religious Endowments.

The Ministry of Religious Endowments is responsible for giving licenses for building churches and assigning a certain area for those churches. It is also responsible for paying for the overheads of any house of worship, including water and electricity. Most importantly, the Ministry of Religious Endowments makes sure that religious discourse in any house of worship is not hostile or extreme.

The representatives of the religious institutions presented a plan on how to educate and raise awareness among citizens about the importance of water and to encourage people of different religious denominations to preserve water as part of the state rationalization strategy.

The UNICEF workshop, however, was part of a series of other actions by the Egyptian religious institutions to promote the water rationalization strategy. In fact, churches, mosques, some of the Religious Endowments departments and Al-Azhar faculties and institutes have been holding seminars and workshops in different parts and governorates of Egypt to promote the importance of rationalization of water use. The Religious Endowments department of Kafr El-Sheikh organized a seminar on March 2, the Church of Mar Girgis in Qena governorate held a seminar on Feb. 21, and Al-Azhar University of Sohag organized two seminars, on Feb. 7 and March 10.

The Ministry of Religious Endowments started raising public awareness of the issue even before the formation of the committee. The Friday sermon approved by the ministry and delivered throughout the country's mosques on Jan. 10 was all about “the blessing of water and the need to preserve it and rationalize its use and consumption.”

The Coptic Orthodox Church dedicated the Epiphany sermon Jan. 18 to preach about the proper use of water as part of the plan of encouraging the rationalization of water consumption in coordination with the ministries of Religious Endowments and Water Resources and Irrigation.

Fahmi told Al-Monitor, “It is only normal for the state to ask the help of the Ministry of Religious Endowments and other religious institutions to be part of its strategy to promote rationalization of water use. First, the Egyptian people — whether Christians or Muslims — are religious in general. Second, the Ministry of Religious Endowments is involved in all religious matters as it supervises mosques and churches in Egypt. The issue of water, however, is not related to politics or to natural resources only. It is a social issue of paramount importance for the different components of Egyptian society.”

He said, “Every four months, Friday sermons in mosques will be dedicated to address the issue of water and to spread awareness among citizens. This is happening in coordination with the church to take similar actions in the church services."

In turn, Zakariah said, “Water conservation is a public issue rather than a political one. It is an undisputed matter for all — Muslims, Christians, supporters or opponents of the regime. This is the cause of all institutions, including artistic and cultural [institutions], universities, schools, mosques and churches.”

Khaled Montasser, a secular journalist, appreciated the efforts exerted by the mosques and churches in advocating the water issue. He told Al-Monitor, “However, these efforts could still carry the risk of maintaining religious influence over citizens, preventing them from scientific and cultural analyses."

He added, “Excessive consumption of water resources is harmful and wrong according to scientific evidence. This does not require the opinion or advice of a sheikh or a priest. Therefore, the state must seek to educate future generations to opt for what is scientifically evidenced in scientific issues, without prejudice to the role of religion in their lives.”

Al-Monitor also contacted Ahmad Ghanem, an opposition political analyst based in the United States, through Facebook. He said, “Sisi’s regime exploits the clergymen in religious endowments, Al-Azhar and the church to mislead Egyptians into thinking that the water crises that will hit Egypt soon are caused by excessive consumption and that the solution is rationalization,” he said. “These crises will be due to the regime’s failure to find a solution to the Renaissance Dam crisis and the impact of the dam on Egypt's Nile water share.”

Ihab Gibril, the director of the water program at UNICEF Egypt, has a different opinion. He believes each awareness campaign must address the public through the channels preferred by its specific public. He told Al-Monitor, “The Egyptian people may prefer awareness campaigns through religious channels rather than the media. Several media campaigns in the ’90s and the beginning of the 2000s proved to be useless.”