A new government-supervised TV channel will focus on news and issues related to the African continent, but some fear its real purpose is to promote Cairo's interests. 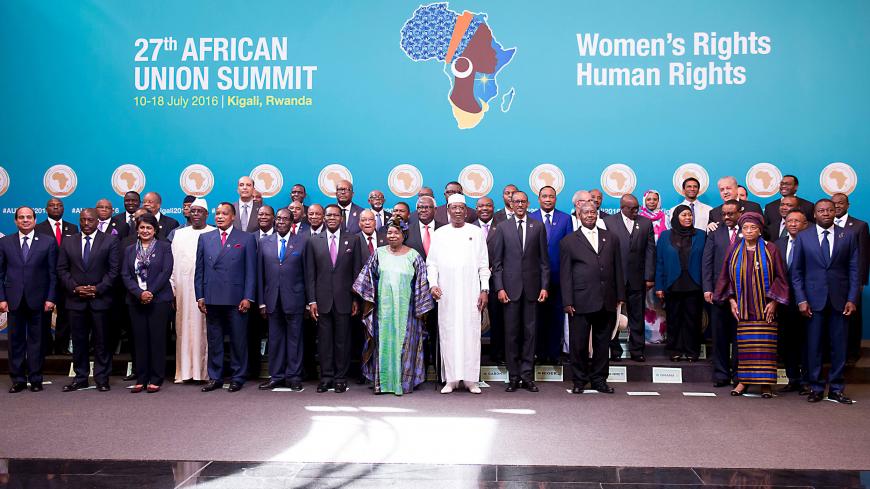 Egyptian President Abdel Fattah al-Sisi (L) and other heads of state pose during a photo call before the official opening of the 27th African Union Summit in Kigali, Rwanda, July 17, 2016. - CYRIL NDEGEYA/AFP/Getty Images

As part of its efforts to boost ties with other African countries, the Egyptian government is planning to launch a TV channel and news website covering African news and issues.

Ahmed Selim, secretary-general of the Egyptian Supreme Council for Media Regulation (SCMR), said March 12 the council has been taking serious steps toward establishing the TV channel with African and Arab media professionals’ assistance.

The Cairo-based TV channel, whose launch date is yet to be determined, will operate under the government’s supervision.

“This comes as part of the SCMR belief that it is important to have an African media outlet assuming an effective role in all parts of the world,” Selim said during a Cairo meeting with a group of Arabic-speaking African media professionals, which Al-Monitor attended.

The SCMR announced March 22 that a website focusing on news and issues related to the African continent will be launched. The website, whose March 23 launch was postponed and which will be affiliated with the state-run SCMR, will also cover anything related to African media trainees and provide updates on any media training programs.

“The media can assume a very influential role in bridging the gaps between cultures and peoples,” said Mahmoud Allam el-Deen, a professor of mass communication at Cairo University. He added that Egypt has been away from the African continent for years and is trying now in every possible way to restore these relations and bring the African people closer to the Egyptian people.

“The soft power, like the media, is an Egyptian major tool to boost these relations with African countries,” Allam el-Deen told Al-Monitor. He also said that Egypt’s strategy toward Africa since 2014 bodes well for the future of political, economic and cultural ties with the continent.

In recent years, Egypt has been seeking to enhance ties with other African countries after years of negligence. Last year, the first African cinema club was opened at Cairo Opera House in an attempt to promote cultural relations with African states. According to Egyptian officials, the club aims at promoting African culture in Egypt and raising more awareness of Egypt’s African identity.

“Africa lies at the heart of Egypt's foreign policy, for it is in Africa that our historic roots lie, and it is from Africa that we derive pride in our identity and our deep sense of belonging,” President Abdel Fattah al-Sisi said during the 72nd General Assembly of the United Nations.

According to a 2017 report released by the State Information Service, Sisi paid 21 visits to African countries out of 69 overall foreign visits since he took office — consisting of more than 30% of his total foreign visits.

In an interview with Egyptian state TV in December 2017, presidential spokesman Bassam Radi said that “Egypt has never overlooked the African continent. Yet domestic, foreign and regional circumstances under a particular period resulted in tepid interest in the Egyptian-African relations,” as reported by the media. The interview came on the sidelines of Africa 2017: Business for Africa Forum in Sharm el-Sheikh, which gathers African leaders, heads of government, ministers and investors in Egypt.

Although some media professionals have lauded the move, others perceived it to be politically oriented. “I see it as a political decision, not one related to the media,” said Naglaa El-Emary, a professor of mass communication at the American University in Cairo and former chief of BBC Cairo Bureau.

Emary added that Egypt’s media industry still lacks some factors for an effective news TV channel addressing the African continent. “We still have a problem with making the news. So far, Egypt has not launched a strong TV news channel addressing the Arab world like Al-Jazeera or Al-Arabiya. So, it would be difficult and challenging for Egyptians to launch a competitive TV news channel for the African people,” she told Al-Monitor.

A journalist from Ghana who declined to be named said that the idea is excellent. However, he raised concerns about whether or not the channel would serve the Egyptian government’s interests. “I am concerned that this channel would not focus on Africa as much as it would serve the Egyptian interest in Africa,” the journalist told Al-Monitor. He said he hopes that the new TV channel would be different from the other channels operating in the African continent that serve their own countries’ interests.

“The move is still promising, and it can be useful in bringing the African and Egyptian peoples closer,” he said.