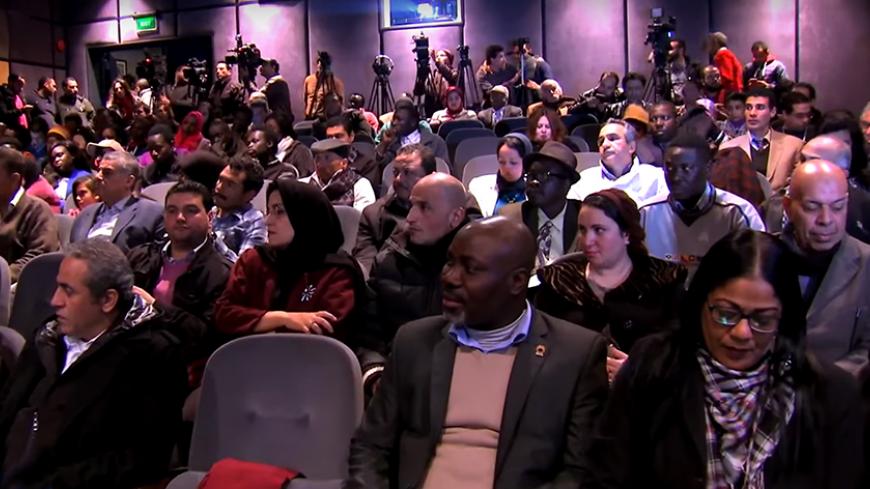 On the beats of African music, Egypt has recently celebrated the inauguration of its first African Cinema Club at the Cairo Opera House's Hanager Cinema, pinning its hopes that such a step will further cement its cultural and political ties with African countries. Uplifting African film industry and consolidating Egypt's African identity are at the top of the club's priorities.

The African Cinema Club is to screen films from all African countries throughout the year in an attempt to build a bridge between the continent's communities through art. The film screenings are scheduled to take place on the first Saturday of every month. Films from Ethiopia, Tunisia, Kenya and Egypt have already been screened at the opening ceremony. Numerous seminars on the main obstacles hampering the African cinema are expected to be held as part of the club's activities.

The club was inaugurated Jan. 9 under the supervision of the Culture Ministry, represented by the Cultural Development Fund, in collaboration with the Luxor African Film Festival.

Egyptian Culture Minister Helmi El-Namnam stressed throughout his speech at the opening ceremony that the contents of visual and audio arts are more accessible to audiences and their messages can be rapidly and effectively conveyed. Therefore, Namnam continued, this club can be Egypt's "gateway" into the African continent.

"We are proud of our Arab origin, of our Arabism. But Egypt is originally an African country. We do not forget that and no one should forget that. Egypt's Club of African Cinema will keep us abreast of the latest developments in the African cinema. Screening films from all African countries will, definitely, add to our culture and art," Namnam told the audience at the opening ceremony.

Boosting the African cinema has always been the target of those who are involved in this industry. In this regard, Egypt actually organizes one of the most prestigious events in the continent, namely the Luxor African Film Festival. This annual festival seeks to turn the world's eyes toward the African cinema, trying to make it internationally competitive. It also helps create a network between the continent's filmmakers to push all genres of African films forward.

The newly launched club is considered an extension to this festival, where short and long films from more than 30 countries are screened. The festival's sixth edition is to run on March 16-22.

"A seven-day festival is not enough to cover and promote the film industry in a large continent like Africa, which is known for its cultural diversity. That is why we have decided to launch a club that will closely follow up the latest developments in the African cinema throughout the year," scriptwriter Sayed Fouad, the head of the Luxor African Film Festival, told Al-Monitor.

African films usually spotlight the multiple cultural and social problems that plague the continent, including the hurdles that African women continue to face. Therefore, screening these films in Egypt's club, Fouad continued, will strengthen the human and cultural interaction between African societies, paving the way for a brighter future for the African cinema as a whole.

"Surely, the lack of financial resources is the main challenge facing the African cinema. But on the professional level, Africa is filled with many qualified cadres and talented film directors. For instance, the Mauritanian film "Timbuktu," directed by Abderrahmane Sissako, has been nominated for best foreign language film at the 87th Oscars/Academy Awards. It also swept the 40th Cesar Awards in France," Fouad said, expressing optimism that the African cinema's glory will be restored.

African film producers continue to grapple with several hardships, including the lack of theaters and well-equipped studios coupled with the difficulty of distributing their films. However, Mohamed El-Adl, a top film producer in Egypt, believes that the lack of government awareness about the importance of film is the main specter haunting the industry in Africa.

"African governments, unfortunately, give art, which is called a soft power, a back seat since they are not fully aware of its paramount importance. Developed countries, like America, have managed to invade the world not through wars but through art," Adl told Al-Monitor.

Adl said the launch of the African Cinema Club is a positive indicator that Egypt is starting to realize the vital role of art in the development process. "Once our governments understand and prioritize art, African cinema can easily restore its power, in fact."

Egypt's keenness on deepening its cultural ties with African countries may cast a shadow over the political scene, bearing in mind that Egyptian-African relations were neglected during the 30-year rule of former President Hosni Mubarak. Those relations have also been negatively affected by water talks and the construction of the Grand Ethiopian Renaissance Dam that threatens Egypt's share of the Nile River water.

However, since President Abdel Fattah al-Sisi took office, Egypt has been stepping up its efforts to enhance its presence in Africa.

"Cinema and art in general are one of the most important means for African people to communicate with each other. Egypt's African Cinema Club along with President Sisi's declaration that Aswan will be Egypt's window to Africa demonstrate the country's seriousness in deepening its cultural and political co-operation with African countries," Mona Monir, a member of parliament's Committee of African Affairs, told Al-Monitor, referring to Sisi's statement in the second monthly youth conference in the Upper Egyptian city of Aswan.

Regarding the film industry, Monir said that some African countries still do not have screening halls and need more support. African films, especially the documentary ones, that will be screened in the club will help people recognize the challenges faced by their continent. Without such cultural awareness, Monir said, there cannot be effective economic or political cooperation.

"We, the African people, have the same roots. We share the same culture, traditions, problems and dreams. Such a club will help other countries benefit from our expertise and vice versa," he said.

Scriptwriter Fouad also pointed out that the club will issue periodic reports on the African cinema's conditions along with other publications on its history.