Despite the government intensifying its crackdown on dissent and the media ahead of the presidential elections, a handful of Egyptian cartoonists defiantly continue to lampoon Egyptian President Abdel Fattah al-Sisi's inevitable victory. 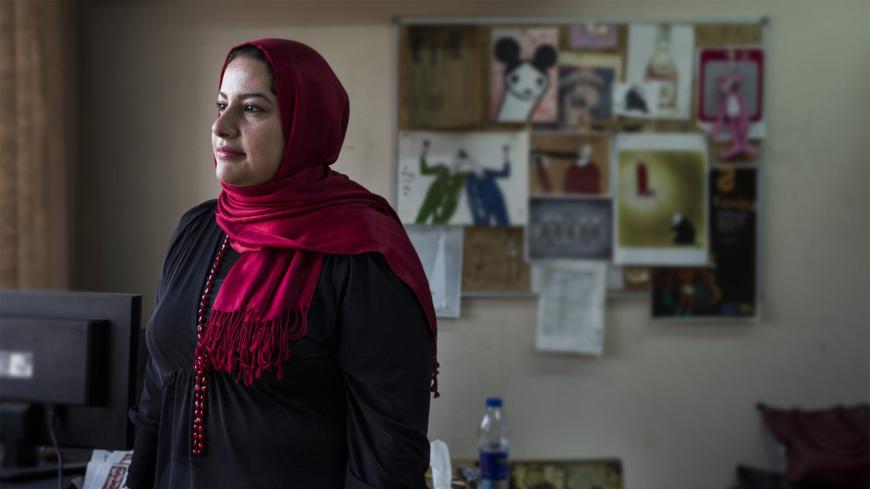 Egyptians began heading to the polls today to cast their vote in presidential elections that critics have described as "farcical." President Abdel Fattah al-Sisi is running against a little-known contender who had earlier endorsed Sisi's candidacy for a second term. In the weeks leading up to the poll, the authorities have intensified their crackdown on dissent, using all means in their power to intimidate and silence critics.

In this climate of fear and intimidation, many voices have fallen silent — except several defiant Egyptian cartoonists who continue to push the envelope, criticizing the government's abuse of power and challenging censorship despite the risks.

"The state of laughter is alive and well in Egypt. One only has to look at the terrifically droll cartoons about Sisi's imminent and inevitable re-election to see that," said Jonathan Guyer, a fellow at Harvard University's Radcliffe Institute for Advanced Study, who has been closely following the work of cartoonists in the Middle East since the Arab Spring.

Describing Egypt's cartooning landscape as "rich" and "diverse," he told Al-Monitor by email, “Egyptian cartoonists express their ingenuity as satirists by finding ways to skewer authority in the face of severe risks."

Egypt ranks among the world's worst three jailers of journalists, according to a December 2017 report published by the New York-based Committee to Protect Journalists. The report put the number of jailed journalists at 20, a conservative estimate compared to much higher figures cited by some Egyptian rights groups.

In February 2016, Egyptian cartoonist Islam Gawish was briefly detained for running a website without a license; he was released 24 hours later without charge. A couple of months earlier, Amr Nohan, a law graduate, was convicted on charges of "attempting to overthrow the regime” and was given a three-year jail sentence by a military court — simply for posting on his Facebook page a doctored image of Sisi wearing Mickey Mouse ears. He remains in prison despite his lawyer's claim that it was "all just a joke."

Guyer said that the restrictions on satire are nothing new. "Egyptian cartoonists have always been confronted with limitations, whether legal or editorial,” he said, adding that these varied according to the dominating powers and their pet peeves. He recalled that in the months after Hosni Mubarak's downfall, when Egypt was ruled by the Supreme Council of the Armed Forces, cartoonists received phone calls telling them to tone down their anti-military work. When Mohammed Morsi was president, Islamists intimidated and sued opposition humorists.

The Sisi government does not take kindly to mockery either. "Even the slightest criticism of the government is perceived as an act of treason by those in authority and by patriotic citizens, [a term often used to refer to the trolls for the government]," said Doaa el-Adl, one of a handful of cartoonists who has remained audacious despite the dangers she and her colleagues face.

In one of her recent cartoons published in the privately owned Al-Masry Al-Youm on March 17, she criticized the abundance of election campaign signs, posters and banners in the streets deployed for Sisi's re-election bid without mentioning Sisi by name. “The deceased and his family support the presidential candidate," declares the campaign banner in Adl's drawing. A mourner points at the banner, saying the dead man had requested in his will that his family put up a poster expressing his support for the candidate. “It unleashed a shocking verbal tirade against me on social media networks," she told Al-Monitor.

"Artists feel restricted and suffocated; new taboos emerge every day, and we no longer can tell if we have crossed some red line. It's like walking a tightrope [where you feel] you could lose your balance any day," she said.

Still, Adl considers herself one of the “lucky ones” as her editors have largely been supportive of her work. “I've rarely had a cartoon denied or altered as Al-Masry Al-Youm gives us more freedom than most other publications. Very often I hear from cartoonists who work for other newspapers that their artwork has been censored by their pro-regime editors; worse still, they self-censor because they fear persecution and arrests," she added.

Unlike some of her colleagues, Adl refuses to be intimidated. She has kept up her satirical criticism of the government's malpractices despite facing prosecution on blasphemy charges during the Morsi era, when she drew a cartoon that depicted an angel telling Adam and Eve that they could stay in the Garden of Eden if they vote for the right candidate.

Adl, one of the few female cartoonists in Egypt, said that she is driven by the conviction that her sketches can break taboos and effect positive change in society. It is this belief that has led her to focus on marginalized groups, including women, using humor to draw attention to their plight and their struggle to attain equality.

While Al-Masry Al-Youm may be at the forefront of Egypt's cartoon culture, the liberal Mada Masr is the only other news site allowing critical cartoonists unrestricted freedom to lampoon the government. But access to the independent news site has been blocked by the authorities along with more than 400 others that the government claims "spread false news" and "are linked to the outlawed Muslim Brotherhood." Despite the government's systemic efforts to stifle freedom of expression, satire continues to thrive thanks to social media and some daring publishers.

"There are scores of illustrators online, dozens of Facebook pages and portfolios of young artists on graphic design sites. Book publishers are increasingly interested in comics and emerging art," Guyer said.

The third international edition of the CairoComix Festival in September was hailed by critics as "an artistic celebration" of the evolution of the country's independent art movement. The festival featured many of the street artists and cartoonists who had participated in the 2011 uprising. Cartoonist Mohamed Anwar who studied engineering at Cairo University and who co-founded Egypt's rebellious quarterly comic magazine Tok Tok told Al-Monitor that the country's independent art scene was evidently vibrant in the last five years of Mubarak's rule.

"The birth of the Kefaya opposition movement gave independent cartoonists the impetus to express people's grievances and poke fun at the government's incompetence," he said. In one of his bolder cartoons published in January, a woman working at the public notary office asks her colleague, "Should we take the public's endorsement forms for the candidates first, or should we announce the name of the winning candidate?”

While he is no stranger to controversy, Anwar's brand of satire is not overtly political; rather, his cartoons mostly deal with everyday life and the struggles of ordinary Egyptians. In recent years, he has been forced to tone down his cartoons and admits that he has had to avoid depicting Sisi in his drawings and mocking the military, "not out of fear," he said, "but in a bid to appease my fans."

Outliers like Anwar, Adl and a few other fearless satirists keep alive the spirit of the Arab Spring, despite the authorities' efforts to reverse the movement for change that started more than seven years ago.

“The revolutionary demands for bread, freedom and social justice remain central to many cartoonists and comic artists. The revolution lives on — or at least is struggling to get by — in cartoons," Guyer concluded.