Justice Minister Ayelet Shaked is trying to erase the legal separation between Israeli settlers and Palestinians on the West Bank, which would amount to annexation of the occupied territory. 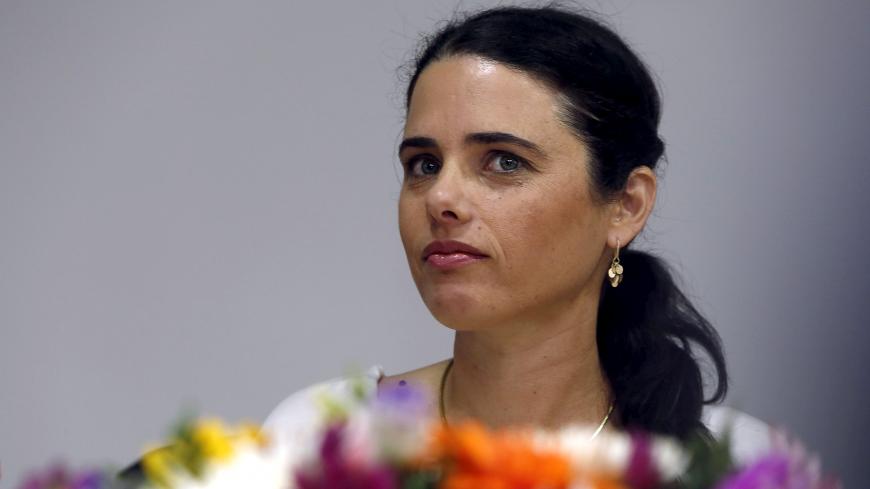 Ayelet Shaked, Israel's justice minister from the far-right HaBayit HaYehudi, attends a ceremony at the Justice Ministry in Jerusalem, May 17, 2015. - REUTERS/Gali Tibbon

On Feb. 25, a government panel approved proposed legislation that would transfer jurisdiction over certain petitions filed by West Bank Palestinians from the Israeli Supreme Court to the Jerusalem District Court. The bill, sponsored by Justice Minister Ayelet Shaked, is a precedent-setting move that would de facto impose Israeli law on the West Bank. It would validate the “creeping imposition” of Israeli law for the benefit of the hundreds of thousands of Israeli settlers living among the Palestinians. The settlers are currently governed largely by military law, which applies in the West Bank since it is legally considered occupied territory.

“One Rule, Two Legal Systems,” a 2014 report compiled by the Association of Civil Rights in Israel, provides an overview of the institutionalized judicial discrimination at play in the West Bank, where two different population groups live side-by-side but under unequal legal systems. “Those who belong to one population enjoy human rights and civil liberties, while those who belong to the other population are not entitled to them, or entitled to them to a much lesser extent,” the report states.

If the Knesset approves the law Shaked has been vigorously pushing since she took office in 2015, the lives of West Bank Palestinians will become even more complex. They will still be subject to Israeli military law, but only the Jerusalem District Court, rather than the Supreme Court, will be authorized to hear initial petitions against Israeli authorities on such issues as entry and exit from the West Bank and building and planning permits. Furthermore, Shaked is pushing for personnel changes in the district court.

Shaked brought the full power of her office to bear to appoint Haya Zandberg, her confidant and an attorney, as a Jerusalem District Court judge. Zandberg served in the State Prosecutor’s office as head of a panel tasked with legalizing wildcat settlement outposts in the West Bank. Zandberg’s Feb. 22 appointment was part of Shaked’s declared plan for sweeping reform of Israel’s legal and court system.

For Shaked and her party, HaBayit HaYehudi (Jewish Home), reform means appointing judges whose personal and judicial record ensures that they will be sympathetic to the settlement enterprise and not stand in its way. The rulings by these judges would be the opposite of various Supreme Court decisions mandating evacuating settlements such as Amona, the girls’ high school (ulpana) in the settlement of Beit El, and other structures and outposts deemed illegal.

Indeed, the most recent batch of judicial appointments, announced Feb. 23, included two new Supreme Court justices — Professor Alex Stein and Judge Ofer Groskopf — after which Shaked declared with great fanfare that her move to reform the country’s top court had been completed. Less than a week after this part of the judicial puzzle had been put in place, Shaked began the second phase of her grand plan — transferring jurisdiction over Palestinian petitions from the Supreme Court to the Jerusalem District Court.

“The move I lead now will channel the additional burden [on the Supreme Court] to the lower courts. Equally important is ending the discrimination currently practiced against the residents of Judea and Samaria [the biblical term for West Bank],” she said, after her government colleagues green-lighted her bill. “Their rights should be equal to those of any other citizen.” In other words, Shaked claimed that she was motivated by a desire for greater efficiency in the work of the court rather than ideological issues.

The law must still pass three Knesset readings to be adopted, but given the current composition of Israel’s legislature, it is likely to be approved. This would validate the declared ideological principles of Jewish Home, which wants to annex the West Bank, turning them into binding legal statutes.

Gilad Grossman of the human rights organization Yesh Din told Al-Monitor that practically speaking, it does not matter whether the Supreme Court or the Jerusalem District Court adjudicates Palestinian land issue petitions, because the decision will generally be the same. Referring to his organization’s petition to the Supreme Court on behalf of Palestinian landowners against the settlement of Amona, Grossman said the ruling would have been identical if the petition had been filed with the district court, as the state conceded that the land in question was privately owned by Palestinians. Nonetheless, he also asserted that the legislation being sponsored by the justice minister leads to annexation.

“This bill is designed to indicate a kind of normalcy,” Grossman said. “[It is meant] to show that we’re not talking about an area conquered by one nation whose residents [Israelis] do whatever they want and no one enforces the law against them in an equal manner, but rather that these are conflicts between neighbors just like in Tel Aviv, Haifa or any other town within sovereign Israel.”

The bill is largely aimed at swaying public perception, claiming that from a legal standpoint, the issue is one of equal rights rather than of Palestinians and Israelis living in contested territory under different legal systems, Grossman noted. “In other words, the idea is to turn the West Bank into just another district in Israel,” he said.

The new bill, if it passes, also has a psychological element. Aggrieved Palestinian landowners will hesitate to petition a lower Israeli court and become entangled in a lengthy legal process. Petitions to the Supreme Court, the country’s top adjudicator, are often accompanied by briefs from human rights organizations and have a high public profile. The rulings on them are almost always final (except for rare cases where an additional hearing is held by an expanded panel of judges). Rulings handed down by a district court are not final and can be appealed to the Supreme Court, entailing a lengthier, dragged out process.

Should the proposed bill become law — and human rights organizations challenge its legality before the Supreme Court — the justices will have an interesting decision to make regarding their own jurisdiction. In other words, they will have to decide whether to strip themselves of the right to hear petitions by Palestinians. The more complex question, however, is whether the settlers will be considered residents of Israeli territory or of territory governed by military law by virtue of its status as occupied land.