Egyptians will find slim pickings on their presidential election ballots come March, leaving the relevance of political parties in question. 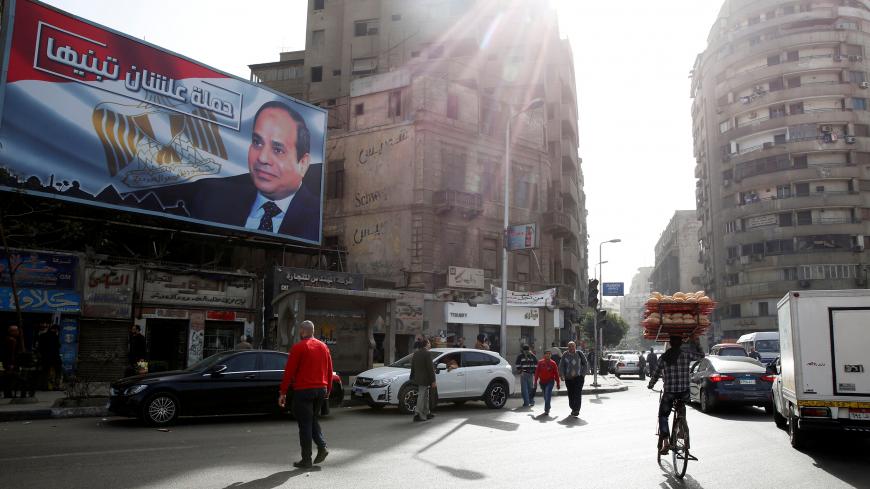 People walk by a poster of Egypt's President Abdel Fattah al-Sisi from the campaign titled “Alashan Tabneeha” ("So You Can Build It"), for the upcoming presidential elections in Cairo, Jan. 22, 2018.

CAIRO — As would-be challengers to Egyptian President Abdel Fattah al-Sisi slip off the campaign trail — or are pushed — people are wondering what the future holds for the country's political parties. Human rights lawyer Khaled Ali's withdrawal Jan. 24 from Egypt's presidential race — a day after candidate Gen. Sami Anan was arrested — raised questions about what role parties might play in the upcoming elections.

Also, on Jan. 26, Wafd Party leader El-Sayyid el-Badawi announced he was running for president, but the party’s supreme body withdrew his candidacy the next day and endorsed Sisi in the elections, scheduled for late March. In December, a military court sentenced Col. Ahmed Qonsowa to six years in prison. He had been arrested soon after he announced he would run.

More than a half-dozen proposed candidates have come and gone, leaving only one — a staunch Sisi supporter — to "challenge" him.

Several Egyptian parties, mainly Wafd, the Free Egyptians Party, the Nour Party and the National Progressive Unionist Party, have all endorsed Sisi for a second four-year term and refused to nominate anyone to run against him. These parties faced stiff criticism in the media. Finally, El-Ghad Party leader Moussa Moustafa Moussa submitted his candidacy at the last minute Jan. 29 before the application deadline.

Moussa, however, is a Sisi supporter who said he is only running to keep the election from being viewed as a joke, a one-horse race. The ploy hasn't worked. Not only do some members of parliament not take Moussa seriously, the move has led to blatant derision by the international media.

In a Jan. 28 statement, parliament member Saeed Shababik said political parties have lost their credibility among Egyptians and are unable to train cadres qualified to take part in political life.

There are 104 political parties in Egypt, according to statements by Egyptian parliament Speaker Ali Abdel Aal. Most of these parties were founded after the January 25 Revolution in 2011. Only 19 secured enough support to win seats in parliament in the 2015 elections.

Parliament member Sayed Abdel Aal of the National Progressive Unionist Party, commenting on why his party did not nominate a presidential candidate, said Egypt needs the strength of solidarity.

“The current situation in Egypt in terms of security and economic challenges does not require more than one presidential candidate. The situation rather requires an agreement on a single national program to confront [outside] attempts to interfere in Egyptian affairs and to achieve economic development," Abdel Aal told Al-Monitor.

“Therefore, we do not need to nominate candidates. We can simply endorse President Sisi’s program aimed at implementing numerous national projects for another four years. Other political parties that endorsed Sisi share the same opinion,” Abdel Aal said.

Asked if Egyptian political parties actually have little influence on the ground, he said, “Some might think so, but that's not everyone’s opinion in Egypt. In fact, in the 2012 presidential elections, we nominated Judge Hisham Bastawisi. The party might nominate another candidate in the 2022 elections.”

Wafd Party Deputy Chairman Hossam El Kholy believes the June 30 Revolution in 2013 that ousted President Mohammed Morsi is the main reason political parties are unable to endorse a strong candidate to compete against Sisi. After Morsi was deposed, political parties joined hands in the face of terrorist groups that were trying to stir up strife in the country. Those parties then weren't prepared to nominate a candidate for president as they had been standing by the political regime during a critical period.

“I believe that the parties should focus on building grass-roots bases and secure a large number of seats in parliament. Then they can start thinking of a strong candidate to run in the elections,” Kholy told Al-Monitor, stressing that the Wafd Party might also nominate a candidate for the 2022 elections.

Abdel Moneim Saeed, the director of the Regional Center for Strategic Studies, told Al-Monitor some of the reasons political parties are failing to nominate candidates: They lack funding; they tend to represent the interests of only parts of the public; they must compete against two strong groups — the Muslim Brotherhood and the army; and the parties are unproductively competitive.

"Usually a wealthy businessman endorses and funds a political party, which means that the party only reflects one single point of view instead of upholding the general interest of its supporters and implementing its political program. This is the problem of most Egyptian parties," Saeed said.

"The Muslim Brotherhood, which tends toward the use of violence, receives funding from some of its members and has an international base in Islamic and Arab countries," and the army is the only structured organization in the country. "Both groups view multipartyism negatively. … Multipartyism is viewed on the basis of rivalry, rather than the acceptance of the other.”

Another problem, according to media reports, is that leaders within political parties have been vying against each other for positions in recent years, which has damaged those parties' structures. That kind of struggle culminated in a split in the Free Egyptians Party that ended in court in February 2017.

Saeed rejected some political parties' allegations that the government is cracking down on them — though the candidates who are imprisoned or whose campaigns were derailed before they began most likely beg to differ.

“These allegations are baseless," Saeed said. "With today’s technology, any political party has the ability to mobilize its supporters. [Instead of making such allegations], parties ought to start acting without fear of victimization. They should also start training their cadres and secure means of self-financing.” 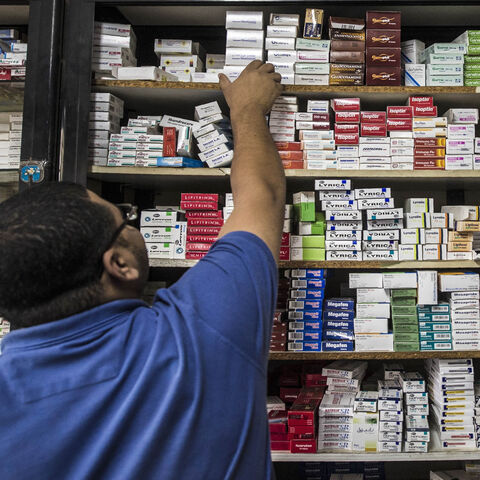 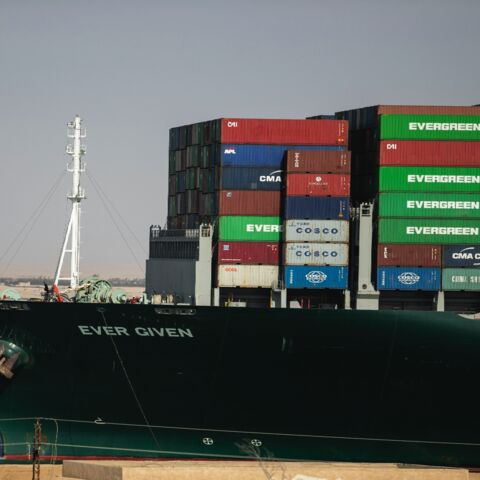 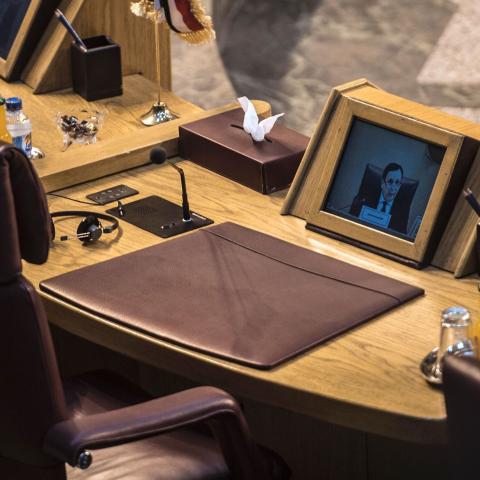