Turkey’s unexpected military-cooperation deal with Sudan and leasing of Suakin Island have rekindled Ottoman fears in the region. 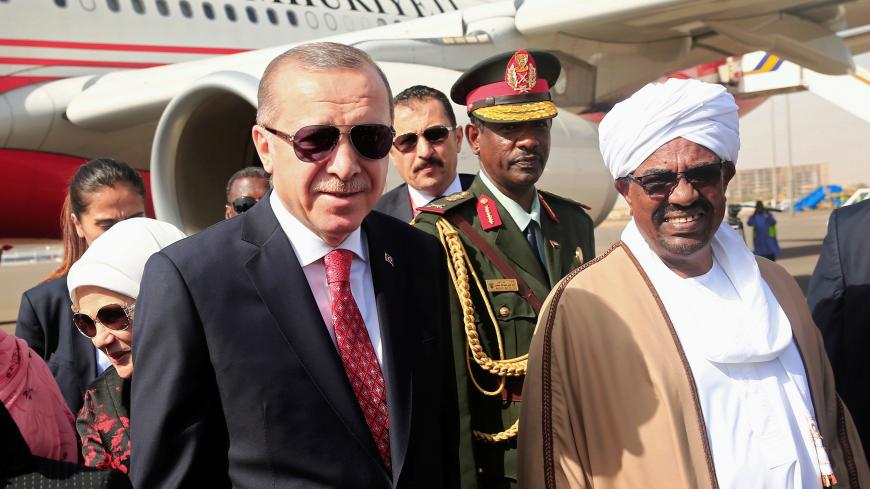 The Gulf-Egypt axis now has another reason to question Turkey's ambitions in the region: President Recep Tayyip Erdogan, in the first leg of his late-December Africa tour, went to Sudan to ask if Ankara could lease Suakin Island. Sudanese President Omar al-Bashir agreed to Erdogan’s request.

Erdogan adamantly rejects claims that Turkey is scheming to build a military base at Suakin. But the island, which once served as an Ottoman forward outpost in the Red Sea, could easily assume military features that would provide Turkey with a third military base abroad, in addition to those in Qatar and Somalia.

During his visit to Sudan, Erdogan signed 13 agreements covering a new airport for the capital Khartoum, a free-trade zone in Port Sudan, a port and shipyards for military and civilian ships in the Red Sea, grain silos at various locations, a university, a hospital and power stations. The countries are targeting an annual trade volume between them of $10 billion, up from the current $500 million.

The two countries induced panic in the Arab world when, in addition to Turkey gaining temporary control of Suakin Island, the two countries' chiefs of staff agreed to develop military cooperation. While explaining why he is paying so much attention to this island that the Sudanese call “the gate to Africa,” Erdogan used the metaphor of “reincarnation,” which reinvigorated the fear of Turks in the region.

Suakin lost its stature and fell into ruin when Port Sudan was built 30 miles to the north between 1905 and 1909. But Erdogan accused Western countries of turning Suakin into a “ghost island.”

“They razed it to the ground. … This is in their nature,” Erdogan said Dec. 25 during a speech at Khartoum University. “Your razing of this place is like us shaving our beards. We will rebuild and reconstruct it in such a way that, like a shaved beard, it will regrow much more abundant."

Erdogan has this plan in mind: If the island is handed over to Turkey, the Turkish Cooperation and Coordination Agency (TIKA) and the Ministry of Culture and Tourism will restore the Ottoman relics there, including a 300-room caravanserai, or inn. TIKA has been operating on the island since 2011 and already has restored the Hanafi and Shafi mosques. When the entire restoration project is completed, Turkish citizens traveling to Mecca for the Islamic pilgrimage of umrah will be able to fly to Sudan to visit historical sites and then go to Jeddah by boat, thus reanimating an Ottoman base and the ancient umrah route.

Whether the island will become a military base is open to speculation, but the port project for military and civilian ships and the accord of military cooperation are enough to raise eyebrows, especially in Egypt and Saudi Arabia.

Egypt fears that Sudan, empowered by Turkish support, might become even more strident in its claim to the disputed Halayeb triangle on the Red Sea coast. Egypt had posted soldiers at Halayeb in the 1990s to block Sudanese aspirations. Moreover, Egypt has been upset with Sudan's support of Ethiopia in an argument over the Renaissance Dam on the Nile. Egyptians fear that a Turkish military alliance with Sudan could actually upset the power balance in the region.

Egypt is also worried about a powerful country like Turkey, which supports the Muslim Brotherhood, having direct access to a neighboring country. Egypt exiled leaders of the Sunni Islamist organization, which supported the previous administration.

Egyptian journalist Imadeddin Adib wrote about Egypt’s concerns in his Al Watan column Dec. 27: “Bashir [al-Assad] is playing with fire in return for dollars. Sudan — with its Turkey madness, with Iranian plots and the Ethiopian scheme to deny water to Egypt, and Qatar’s financial gimmicks — is violating geographic and historic realities against Egypt. Sudan is offering its ports and borders for dispatching of guns and terrorists to Egypt and serving the goals of the Qatar-Turkey alliance to restore the Muslim Brotherhood to power.”

Saudis fear that a base in Sudan controlled by Turkey — which is cooperating with Iran — could become a springboard of support for the Qatar- and Iran-backed Houthi rebels in Yemen. Sudan, despite its promise to remain neutral, gives the impression that it is supporting Qatar in its conflict with Saudi Arabia, Egypt and the United Arab Emirates. A partnership with Turkey is considered a concrete indicator of the change in Sudan’s axis.

Arab media gave wide coverage to statements that the 13 agreements between Sudan and Turkey — worth $650 million — were actually financed by Qatar. In November, Qatar had announced plans to develop a port with Sudan on the Red Sea.

Simultaneously with Erdogan’s Africa tour, Turkish Prime Minister Binali Yildirim went to Saudi Arabia to try to balance the developments in the Red Sea and dispel concerns. But it didn’t work. Although the Saudi leadership kept silent, comments in the media they control revealed their concerns.

Mohammed Abu Talib, a writer for Saudi newspaper Okaz, reminded readers that Sudan was saved from sanctions thanks to the Saudis. He accused Sudan of serving Turkey’s expansion aspirations.

“Turkey is blatantly seeking expansion in the region and using its influence, especially against Egypt and Gulf countries. The most dangerous aspect of this visit was handing over to Erdogan Suakin Island, which faces Jeddah and which he sees as the symbol of the Ottoman Empire,” Abu Talib wrote.

The Gulf News commented, “Iran can use the new Turkish base in Sudan to ship more weapons to Houthis. Turkey, by using the new military facility, could send more soldiers to Qatar or intervene more in Egypt by manipulating the Muslim Brotherhood. This no doubt will worry Jordan as much as Egypt. With Turkish and Sudanese provocations, Sudanese aspirations for Halayeb [the disputed area] can be reignited.”

The website of Al Arabia TV carried an incendiary comment that said, “The Ottoman presence in Suakin is associated with massacres of Sudanese."

How justified are their concerns? Is there really a resurrection of Ottomans? Erdogan has established a pattern of loudly recalling Ottoman forefathers, claiming Ottoman relics and referring to the Ottoman heritage when speaking about the Middle East and Africa. He sees Africa as a region of opportunities and believes that he has more right than anybody else to be there. “More dangerous than a shark smelling blood are the imperialists who smell oil,” Erdogan said during his Sudan visit, while repeating that the Ottomans had no imperialist past.

Erdogan also believes he can compensate in Africa for isolation elsewhere. It is true that this is the region where Turkey’s image has eroded the least. His most recent tour to Sudan, Chad and Tunisia was his fifth visit to Africa since he became president in 2014. He also signed a military accord with Tunisia to train Tunisian soldiers in Turkey and also to invest in the defense field.

Since Turkey declared 2005 "The Year of Africa,” it increased its number of embassies in the continent from 12 to 38. It has a sizable military presence in Somalia, where it just opened a base in September. The base, which cost about $50 million to build, now houses 200 Turkish troops and has a military academy that will train Somali officers.

Turkey also sent its first military detachment to a base near Qatar's capital of Doha in June. So far, there are no more than 100 soldiers at a base that can accommodate 5,000. Troop strength is expected to reach 3,000.

In sum, Erdogan's approach to building African relations by bringing up history and religion is the core concern for Arabs. Turkey could benefit more by basing its relations on joint interests instead of reviving unpleasant past experiences. Erdogan is making the mistake of becoming a party to regional conflicts as he tries to build new bridges in the region. Also, he prefers to forge personal relations instead of solid, institutional relations, making one wonder about the sustainability of Turkey’s ambitious Africa plans.