There is no room left for Erdogan in Sudan turmoil

Sudan’s international failures have provided Turkish President Recep Tayyip Erdogan several opportunities, but now some of the moves are likely to generate significant costs for Turkey. 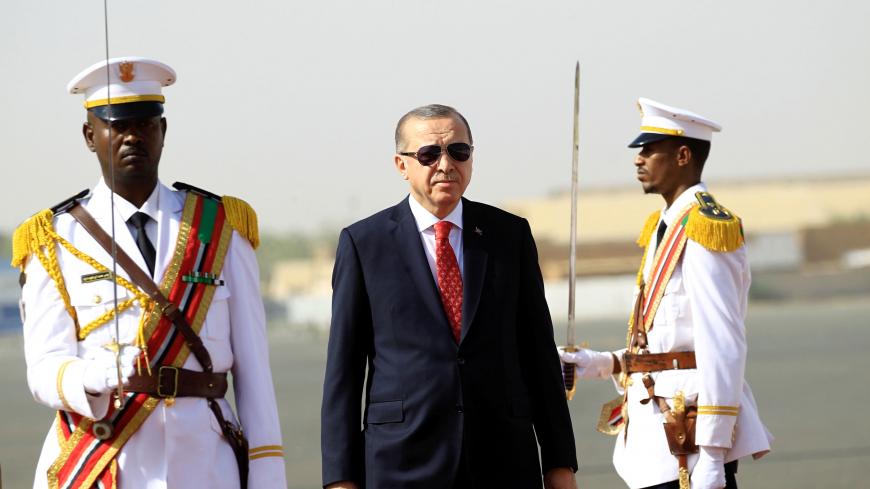 Sudan, which been in turmoil since President Omar al-Bashir's removal from power, was a country where Turkey had surprisingly high-level and close relations. Turkish President Recep Tayyip Erdogan visited Sudan in December 2017 and Bashir reciprocated despite all the controversy it generated.

Turkish exports to Sudan grew along with Turkey's sudden presence at Suakin Island and unexpected military agreements. In April, when Bashir was ousted, Erdogan reacted angrily, saying the coup was actually against Turkey. In June, the Turkey-Sudan friendship platform organized a protest in Istanbul against the Sudanese military intervention.

A scholar working at a state university who specializes in military and intelligence issues said on condition of anonymity, “The coup felt like it targeted Turkey because we failed to invest in players other than Bashir who was inevitably on his way out. Turkey provides scholarships for Sudanese students and brags about all their cultural connections, which are great, but what is the return on these investments in the post-Bashir era? Will we ever know how much Turkey lost in Sudan?”

Since the initial angry burst from Erdogan, Turkey has been quiet about the developments except for a few routine announcements from the Foreign Ministry. Indeed, Egypt, Saudi Arabia and the United Arab Emirates appear to have closer relations with the military junta in Sudan than the Turkey-Qatar axis does. Does this mean there is no room for Erdogan in post-coup Sudan?

Some scholars say there is reason for optimism once Sudanese politics stabilize, but most agree that Erdogan thrives in high-risk one-to-one relations built on personal handshakes. These relations with minimal record keeping are based on mutual trust and little transparency. When proper institutional structures are not established, if one leader is taken out of the picture, the relationship can be shattered and investments and promises may become null and void.

A diplomat who has worked in Africa for the last three years told Al-Monitor, “There was the facade of institutional setup" of treaties, visits and so forth, but that "tenders and contracts were handled on the basis of domestic crony systems.” Indeed, the financial relations are quite complex. For example, in 2017 a news report about production of Nigerian military uniforms shows an investment from a Turkish textile company, Sur Textile Mills. The report said both the Qatari military and Sudanese government each hold 33% shares in the company.

The diplomat confirmed that several similar firms with Turkish connections used to operate in Sudan. He said, “Some of the investors in Sudan who have Qatari or Turkish citizenship have left, but there are still bigger investments such as the airport in Khartoum.”

After a series of unsuccessful attempts by different countries, Summa, an Istanbul-based Turkish construction company, announced in 2018 that it would start to build a new, $1.15 billion Khartoum airport in a year. The diplomat emphasized that “locals have their doubts about how this project would be completed, not necessarily because it is a Turkish company but because it has been delayed so many times before. That said, we hear some firms with links in Turkey are under scrutiny from the new government because they had close relations with the Bashir government. Although Turkey tries hard to make official announcements that it would like good relations with the people of Sudan, the junta will not forget the close links between Erdogan and Bashir, or that Erdogan referred to Bashir as ‘my brother.’ Warm relations with fallen leaders means payback time.”

For example, Turkey leased 780,500 hectares (3,000 square miles) of farming land from Sudan for 99 years. After the coup, opposition parliamentarian Ilhami Ozcan Aygun of the Republican People’s Party asked the government what will happen to that lease and how would this affect Turkish agricultural production, which is already suffering. Aygun posed a crucial question for the government about whether it can renegotiate the lease or even talk to the military junta.  A seasoned journalist, Ali Ekber Yildirim, confirmed Sudan annulled the agreement.

Still, the Turkish presence in Sudan is far from over. On June 21, the Humanitarian Relief Foundation said it has just opened five more mosques in Sudan. There are currently 16 mosques funded by the foundation, which also is funding the construction of five more mosques.

What will happen to the agreement involving Suakin Island is a major concern for both countries. On April 23, Sudanese Lt. Gen. Abdel Fattah al-Burhan, head of Transitional Military Council, tweeted that Suakin is an ‘inseparable part of Sudan.”

The Turkish Foreign Ministry promptly denied that the agreement has been annulled and focused on the cultural and civilian goals of Turkish presence on the island. Before Burhan’s comments, there were several other warning signs on social media, particularly from Gulf countries, that the Turkish presence is not welcome.

Federico Donelli, a postdoctoral research fellow of political science and international relations at the Department of Political Science of the University of Genoa in Italy and a visiting fellow at the Center for Modern Turkish Studies at Istanbul Sehir University, said terms for economic contracts for Suakin are likely to be renegotiated or even broken. "The agreement consisted of the restoration of old Ottoman buildings and the refurbishment of the port. The deal was officially was related to TIKA [Turkish Cooperation and Coordination Agency], but unofficially everybody knew that it would also have been a potential military outpost for Turkey in the Red Sea," Donelli told Al-Monitor. He said this alarmed Saudi Arabia because of its geographical proximity, the UAE because of Turkey's potential port use and Egypt because this could provide refuge to the Muslim Brotherhood. Donelli added, "Despite the fact that until now the Transitional Military Council has declared that it wants to re-discuss the agreement, I believe that the concession for Turkey to operate in Suakin will be withdrawn, but before that, the transitional government has other problems to deal with.”

A researcher from the Association of Researchers on Africa, Kaan Devecioglu, told Al-Monitor that he is convinced that Turkey’s projects in Sudan will survive the turbulent times and be completed as the crisis dies down. Devecioglu added that Sudan is only one of 55 African countries and that its power transition should not threaten Turkey’s overall Africa opening. On the question as to whether the Saudi-Emirati-Egyptian alliance could take over the roles of Turkey and Qatar, Devecioglu emphasized two crucial points. First is that Sudan’s relations with these countries are not new. Second is that there is considerable public criticism against the Saudi bloc countries, which may work to Turkey’s advantage.

Donelli said, “Although Qatar and Turkey seem to be losing from this situation, on the contrary, I believe that they can gain from these developments and revive their ambitions." He said protests in Sudan are directed both against the military and against Saudi Arabia and the UAE, which are accused of supporting the military. Donelli said, "A transition to civilian rule would mean a step backward for the two Gulf monarchies and would pave the way to Qatar and Turkey to take advantage." He said he thought Turkey and Qatar's best option to preserve their own interests would be to adopt a wait-and-see policy without interfering. He added, "It will become essential for the two countries to present themselves as credible interlocutors in the eyes of the protesters. At the moment, in Sudan there are no Islamist groups strong enough and independent from the old regime able to capitalize on and to drive the protests. Therefore, Qatar and Turkey will probably have to change some of their rhetoric to break through.”

Donelli said that despite Ankara's lack of a comprehensive strategy in Africa, “Turkey has been able to carve out a positive image in the eyes of the African people, thanks to a wide range of humanitarian and development aid interventions and to a rhetoric that presents Turkey as a third alternative way to both traditional extra-regional players and emerging powers such as the BRICS [Brazil, Russia, India, China and South Africa]." He said that while Turkey could still gain from the Sudanese situation, most important for Turkey will be for Turkish officials to step back and fix the mistakes it makes and remedy the weaknesses in its Africa strategy.