The overthrow of Sudanese dictator Omar al-Bashir after 30 years in power should be making other autocrats such as Turkey's Recep Tayyip Erdogan nervous. 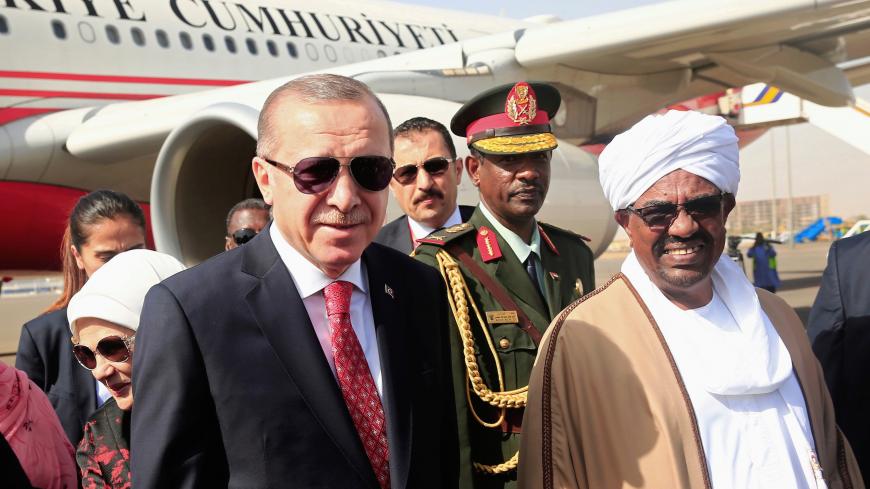 Sudanese dictator Omar al-Bashir, who was overthrown April 11 by military coup, was a good friend and close ally of Turkish President Recep Tayyip Erdogan. During his 30-year rule, Bashir was indicted by the International Criminal Court in 2009 and 2010, charged with five counts of crimes against humanity, two counts of war crimes and three counts of genocide for his alleged mass killings in Darfur that cost some 300,000 lives.

Bashir could travel safely to only a few places in the world and Turkey was one of them. The last time he visited Turkey was right after the June 2018 elections to join Erdogan’s inauguration ceremony.

Six months before that visit, Erdogan had been to Sudan in December 2017, a trip that signified the close relations between the two countries.

While in Khartoum, Erdogan didn’t spare his chance to lash out at the West. “The imperialists devastated Africa, while Turkey will be there for a win-win,” he said. During his visit, the two leaders decided to increase the trade volume between their countries to $10 billion from $500 million. Turkish companies, mainly in the construction field, became involved in some 300 projects in Sudan following Erdogan’s visit.

Turkey has leased some 315,000 hectares [almost 780,000 acres] of agricultural land in Sudan for 99 years. In September 2018, Turkey’s state-owned Turkish Petroleum Corp. made an oil-exploration deal in Sudan that amounted to $100 million.

Turkey’s most important geopolitical and strategic involvement with Sudan concerns Turkey’s interest in establishing a military base on Suakin Island. Turkish Defense Minister Hulusi Akar visited Khartoum in 2018 to arrange to lease the island. Suakin is strategically located at the Red Sea near the Gulf of Aden and Saudi Arabia. The ambitious Turkish project would become the third foreign Turkish military facility, after Qatar and Somalia. Such Turkish objectives irritate the Arab-Sunni axis of Egypt, Saudi Arabia, and the United Arab Emirates. Sudan has always been considered, geopolitically, the Achilles heel of Egypt.

"I hope that Sudan gets through its current process in national reconciliation and peace," Erdogan said at a joint news conference with Roch Marc Christian Kabore, Burkina Faso’s president, in Ankara.

Amid various accounts about Bashir, there is no reliable information, according to Erdogan, who went on to say Turkey supports the continuation of “deep-rooted” relations with Sudan.

“Earlier Thursday, the Sudanese army announced the ‘removal' of al-Bashir and the imposition of a two-year 'transitional phase,'” Anadolu reported.

Anadolu did not report fully what Erdogan said in the press conference with the visiting president; he referred to the coup that removed Bashir.

Erdogan reminded his audience that he did not achieve power thanks to any coup, but was targeted by a military coup attempt. “[Bashir] knows what a military coup means,” Erdogan said. "Every coup [brings a] severe loss of blood. I do not want friendly and fraternal Sudan to have such an experience.”

Erdogan was furious after the 2013 military coup in Egypt, led by Sisi, that ousted President Mohammed Morsi and his Muslim Brotherhood party from power. Erdogan condemned the United States and the European Union for endorsing it. All those who remember his anger couldn't help but notice the cautious tone he adopted regarding the coup in Sudan that removed his close friend Bashir.

The reason seems to be that the nature of the Sudanese regime in the wake of Bashir’s removal is still uncertain and Erdogan looks keen to preserve Turkey’s close relations with Sudan if the new regime is based on people such as recently resigned Sudanese Defense Minister Awad Ibn Auf. Erdogan, notwithstanding his anti-coup reputation, would accept Sudan under military rule as long as it doesn't challenge Turkey’s fortunes.

Ibn Auf declared the establishment of a two-year transitional military council with him in charge, but in the face of continued protests, he didn't stay long in that position.

"[The coup] just replaced one thief with another," Ahmad Ibrahim, a young protester outside the Sudanese army headquarters in Khartoum, told The Washington Post. "We are going to keep pushing until all of our demands are met."

One of those demands is that Bashir, who was arrested, now be prosecuted. But the newspaper also noted, "Ibn Auf was a key military leader during Bashir’s suppression of rebels in Darfur and is unlikely to give Bashir up for prosecution. The US government also imposed sanctions against [Ibn Ouf] in 2007 for his role in Darfur."

Ibn Auf stepped down as council chief after just one day. The body is now led by Lt.-Gen. Abdel Fattah Burhan.

Regardless of the outcome for Turkey’s interests in Sudan, Bashir’s downfall sent a worrisome signal in Erdogan's direction. What happened in Sudan showed that even the most entrenched dictatorships are vulnerable, and that for autocrats, the future is uncertain.

In Turkey's March 31 elections, Erdogan's Justice and Development Party (AKP) and its allies lost almost all the big cities, above all Istanbul and the capital, Ankara.

Erdogan did not concede the loss of Istanbul, and the recount, which will be in vain for him, continues more than two weeks after the vote. In the meantime, the Supreme Electoral Commission — which is considered to be under Erdogan's influence — has prevented the elected mayors affiliated with the pro-Kurdish Peoples’ Democratic Party (HDP) from taking over those municipalities. For now.

Elections seem to be losing their appeal for Turkey’s increasingly autocratic president.

Turkey’s economy is in crisis, and the long-awaited reform package announced April 10 by Finance Minister Berat Albayrak (who is also Erdogan's son-in-law) left investors in Washington underwhelmed, according to Reuters.

In another report, Reuters said, “Turkey’s economy is expected to contract in 2019 after a decade of strong growth, and economists are predicting a longer recession ahead after a recent bout of volatility in the lira.”

Turkey’s economy has been dragged into crisis, along with the country's relations with the United States and NATO over Erdogan’s insistence on acquiring Russia's S-400 air-defense missile system. The possibility that Ankara will face US sanctions is no longer remote, which will further devastate Turkey's finances.

If elections no longer ensure Erdogan’s survival, and the looming and seemingly insurmountable economic and political crises trigger mass protests such as those in Sudan for the past four months, Bashir's saga will haunt Erdogan.