Intel: What ouster of Sudan’s Bashir means for Mideast leaders

The ouster of Sudanese strongman Omar al-Bashir by the country’s military yesterday following months of unrest has received a mixed reception in the Arab world. 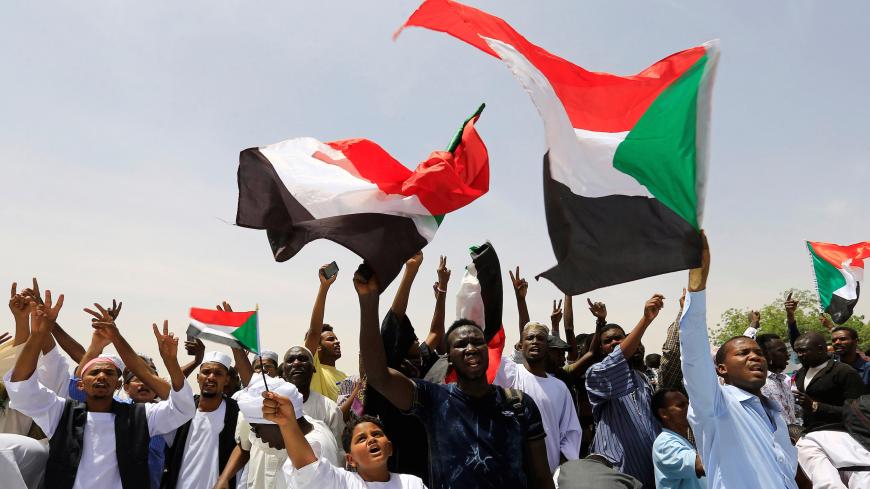 Sudanese demonstrators wave their national flags and chant slogans as they protest the army's announcement that President Omar al-Bashir would be replaced by a military-led transitional council near the Defense Ministry in Khartoum, Sudan, April 12, 2019. - REUTERS

The ouster of Sudanese strongman Omar al-Bashir by the country’s military yesterday following months of unrest has had a mixed reception in the Arab world, with assorted rulers shaking in their shoes. One leader in particular, Syrian President Bashar al-Assad, will be watching closely how the transition of power pans out.

The junta said it has taken Bashir into custody, suspended the constitution and will run the country for a two-year transitional period with elections to follow.

Why it matters: In December, Bashir became the first Arab leader since the start of the Syrian conflict in 2011 to visit Damascus, where he met with Assad. The visit was widely seen as an overture that would likely pave the way after years in the wilderness for Syria’s eventual re-integration into the Arab world. Assad has been treated like a pariah and Syria was suspended from the Arab League in November 2011 in response to his government’s brutal crackdown on pro-democracy protests.

But it's become increasingly apparent, thanks in no small measure to Russia and Iran’s support, that the Assad regime is not falling anytime soon. Countries like Jordan, which is home to at least 1.4 million Syrian refugees and keen to repatriate them, have been quietly reaching out to Damascus. In December, the United Arab Emirates became the first of the Gulf countries that had shuttered their embassies in Syria to re-open. Bahrain followed suit the next day. Bashir was, at Russia’s prodding, angling to get Syria back into the Arab League and to attend its latest summit in Tunis last month, but ultimately failed.

The friend of my enemy can be my friend: It may seem counterintuitive for Assad to be unhappy about the ejection of the Muslim Brotherhood-aligned Bashir, since at home, alongside the al-Qaeda-linked Hayat Tahrir al-Sham, Brotherhood-friendly rebels and their sponsors Turkey and Qatar are among his most bitter foes. And by the same token it may seem odd that Bashir would be mentoring Assad.

Follow the money: Russia, which flew Bashir to the Syrian capital, has reportedly been investing in cash-strapped Sudan, including in its mineral and energy sectors. Rising prices were among the chief triggers of the protests that toppled Bashir and Moscow has used its leverage to get Bashir to help Assad back into the Arab fold.

Turkey’s President Recep Tayyip Erdogan, another of Bashir’s friends, must be nervous too. While he repeated his aversion to military coups — he survived one himself in 2016 — Erdogan was pointedly silent about the plight of his fellow Muslim Brotherhood-aligned traveler in a news conference with Burkina Faso’s president, Roch Mare Christian Kabore, in Ankara yesterday.

There are around 200 Turkish companies operating in Sudan with a total investment of $650 million, according to Turkey’s daily financial newspaper Dunya. In 2018, Turkey’s state petroleum company TPAO signed a $100 million joint production agreement with the Sudanese government, and the list goes on. At the same time, Sudan’s Suakin Island, where an unspecified number of Turkish forces are said to be deployed, was seen as a strategic foothold in the Red Sea as Turkey looks to expand its military footprint in the Middle East and beyond.

The spiraling food prices that expedited Bashir's political demise are one of the reasons Erdogan's ruling Justice and Development Party lost Turkey's biggest cities, Ankara and Istanbul, in the March 31 municipal elections.

What’s next: Sudan’s pro-democracy protesters are not celebrating Bashir’s fall yet because it remains unclear what the military plans to do, although military leaders have said they don’t seek power. But Assad, Erdogan and the ousted dictator’s other regional allies need not panic yet, said Elizabeth Tsurkov, a Syria expert and research fellow at the Washington-based Forum for Regional Thinking. Tsurkov told Al-Monitor, “Regimes across the region that have not fallen, including the Assad regime and [Egyptian President Abdel Fattah] al-Sisi regime, are definitely unhappy about the developments in both Sudan and Algeria. But we don’t know what power will replace Bashir. If it's another military dictatorship, Assad and Sisi and all the other authoritarian regimes will be quite pleased with that outcome.”

Know more: Read about Cairo’s reasons for backing Khartoum during the protest as well as the Iranian media’s reaction to the Sudanese leader’s fall.