Now that the Sudanese military has ousted the president who ruled there for three decades, it will be interesting to see how the new administration will approach Omar al-Bashir's longtime friend, Turkish President Recep Tayyip Erdogan. 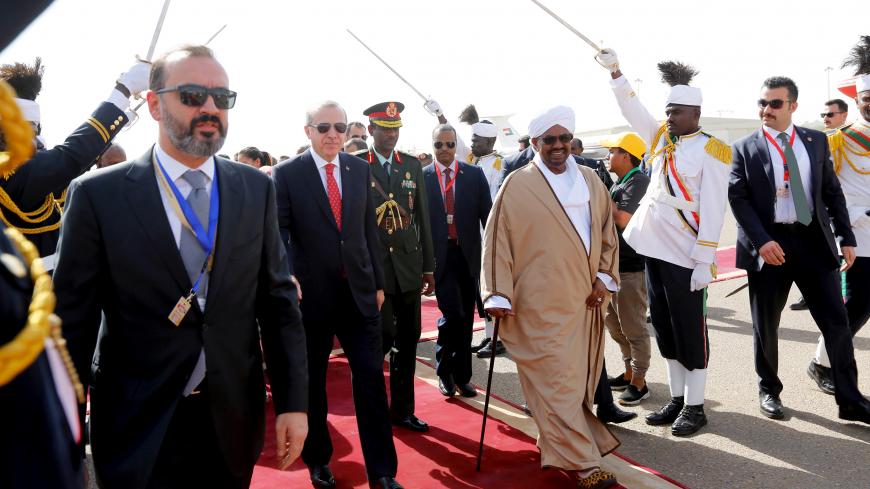 When Egypt's Muslim Brotherhood government was overthrown in 2013, Turkish Prime Minister Recep Tayyip Erdogan took it personally, calling it a move "against Turkey." Now, as president, Erdogan is also labeling last week's military intervention in Sudan a coup “against Turkey.”

Erdogan has long embraced now-ousted Sudanese President Omar al-Bashir as his “brother” — notwithstanding the warrant issued in 2010 by the International Criminal Court for Bashir's arrest on a series of genocide charges.

Turkey’s pro-government media claim that Saudi Arabia, Egypt and the United Arab Emirates (UAE) were behind the coup. According to pro-government circles in Turkey, the trio's intervention serves American and Israeli interests in the region and was triggered by the growing ties between Turkey and Sudan, as well as Turkey’s increasing influence in the Horn of Africa. The pro-government daily Yeni Safak wrote April 12 that the trio had offered financial assistance to Sudan if it would sever its ties with Turkey, but Bashir turned the offer down. That, the paper reported, led to the three countries helping to engineer the coup.

But by blaming other countries for Sudan's current situation, Ankara seems to be ignoring the conditions that led to months of protests in Sudan's streets. The Sudanese people's anger, which initially arose from price increases on bread, fuel, electricity and cooking gas, rapidly turned to demands for freedom and equality. The demonstrations initiated by the Sudanese Professionals Union were supported by 22 political parties and other civil society organizations that had joined with the government Bashir set up in 2015. But in Turkey, government supporters insist on reading these dynamics as a plot by the Gulf states, Israel and the United States.

An April 12 headline in the Star, another pro-government daily, said, “Gulf-staged coup against Bashir.”

“The army staged a coup and the elected president Bashir was arrested. It was reported that before the army intervened, it informed Saudi Arabia, Egypt and UAE,” the newspaper reported.

Turkiye, another pro-government daily, wrote, “Turkey’s friend Sudanese leader Bashir was toppled with a coup supported by the West. [US President Donald] Trump is reshaping the Middle East and Africa to serve Israeli interests. The latest victim was Sudan, which had warm relations with Turkey. Saudi Arabia is behind the putschists. Egypt also supported the coup-makers."

The Daily Akit's headline was even more offensive: “Zionist Coup in Sudan.” Some journalists went even further, claiming the coup was “directly against Turkey.”

Yeni Safak followed up on its claims in an April 17 story with the headlines: "Sudan ruling council hails ties with Riyadh, Abu Dhabi" and "a joint Saudi/Emirati delegation arrives in post-coup Sudan, meets with country's new military leaders."

If Sudan's axis hadn’t shifted over the past four years, one could argue that the warming in Turkey-Sudan relations did play a role in the coup. However, Bashir — who had kept good relations with Turkey since 2008 — cut off its ties with Iran and lined up with the Saudi-Emirate axis in 2016.

Sudan participated in the Yemen war with some 1,000 soldiers to support Saudi Arabia and got two rewards in return: The United States in 2017 annulled the sanctions it had placed on Sudan, and the UAE provided $2 billion for 17 projects in Sudan. There are even reports that UAE investments in the country have reached some $3.5 billion. Bashir’s trip to Damascus in December was perceived as a mediating effort between the Gulf and Syria.

Of course, the availability of such funds didn't ensure Sudan’s access to international financial resources, given Khartoum’s $50 billion in accumulated debt. Also, Sudan is still listed as a country that supports terror. Perhaps that's why Bashir paid more attention than usual to relations with Turkey. But financially, these relations don't even amount to half a billion dollars.

Today’s situation emerged in part from Erdogan's state visit to Khartoum in December 2017, when he asked for and was granted access to the strategically located Suakin Island, which has Ottoman vestiges. That much was accepted. But reports that Turkey was thinking of establishing a Suakin military base were enough to anger the Red Sea neighbors.

Some background information on relations between Turkey and Sudan may be useful. Since 2005, which Turkey pronounced the Year of Africa, Sudan has kept close to Turkey, but the level of relations have been far below what's been touted. Trade volume of $153 million in 2005 reached only $434 million in 2018.

Ankara has been promised a 99-year lease of almost 780,000 acres of land for Turkish companies, in part for agricultural purposes and tourism. This hasn’t yet materialized because of prolonged ownership and land-use formalities, and setting up the operations.

During Erdogan's 2017 visit, a grand plan was announced: The countries signed 22 agreements providing for a new airport at Khartoum, a free-trade zone in Port Sudan, a port and shipyards for military and civilian ships on the Red Sea, grain silos, a university, a hospital and electric power stations. The goal is to boost trade volume to $10 billion in five years. But nothing much has happened in the 16 months since the agreements were signed.

In 2018, the state-owned Turkish Petroleum Corp. signed a $100 million oil-exploration agreement with Sudan. Turkey has also been invited to get involved in Sudan's gold business, but nothing has moved so far.

The only concrete development regarding the accord on Suakin Island is work by 30 experts of the Turkish Cooperation and Coordination Agency to conduct studies on soil, city planning, geology, mapping, architecture and restoration.

The Turkish Cooperation and Coordination Agency, which has been working on other projects on the island since 2011, has already renovated mosques of the Ottoman Hanefi and Shafi eras, and the customs building.

The question of a military base remains thorny. While the Turkish media is excited by a resurgence of the Ottoman era, Saudi and Egyptian media warn of dangers. Egypt's Al Watan newspaper had reported in December 2017, “Sudan is opening its port and borders to dispatch weapons and terrorists to Egypt.”

Saudi Arabia's Okaz newspaper wrote, “The most dangerous aspect of [Sudan] surrendering Suakin Island, opposite our [port city] of Jeddah, is that [the island] is a symbol of the Ottoman Empire to Erdogan.”

The last thing Saudi Arabia wants to see in the Red Sea are Turkish soldiers. Saudis and the UAE are trying to dominate the Red Sea via the war in Yemen, bases in Eritrea and Djibouti and close contacts with Egypt and Jordan. Responding to criticism, Erdogan said in December 2017, “There is no question of a military port.” Turkish Vice President Fuat Oktay would only say in Khartoum in November 2018, “There is work going on to promote tourism on Suakin.”

This “military tourism” has become a joke. Sudan's government has flat-out denied reports of a military base several times. Then-Foreign Affairs Minister Ibrahim Gandur traveled to Cairo in February 2018 to assure Egyptians by saying there haven't been any discussions with Turkey “for a military base or military cooperation on Suakin or any other part of Sudan.” Gandur explained that the intention was to use Suakin for religious activities and tourism and as a starting point for the annual pilgrimage as was done in Ottoman times.

Nevertheless, Turkish media continue to describe the work going on at Suakin as essential to identifying the appropriate locations for a base. Turkish papers report there will be a permanent army unit on the island that will be supported by air and naval elements. Most likely, this information has been leaked by Ankara.

It's important to learn what course the new Sudanese administration will follow in relations with Turkey. Turkey may adopt a quieter, more cautious approach.

After Erdogan's first reaction about the "anti-Turkey coup," Omer Celik, a spokesman for Erdogan's Justice and Development Party, came out with a much milder statement: “The demands of the Sudanese people are our demands. Sudan is a friendly and brotherly country. Our hope is that the Sudanese people will achieve their democratic aspirations and that Sudan will never experience an internal conflict.”

We'll see if this means, “Let’s forget Bashir and look at tomorrow.”