Turkish civilians arm themselves ahead of crucial 2019 polls

As a critical election cycle looms next year, alarm is growing in Turkey over individual armament, especially in pro-government quarters where some have formed dubious groups and openly called on peers to arm themselves. 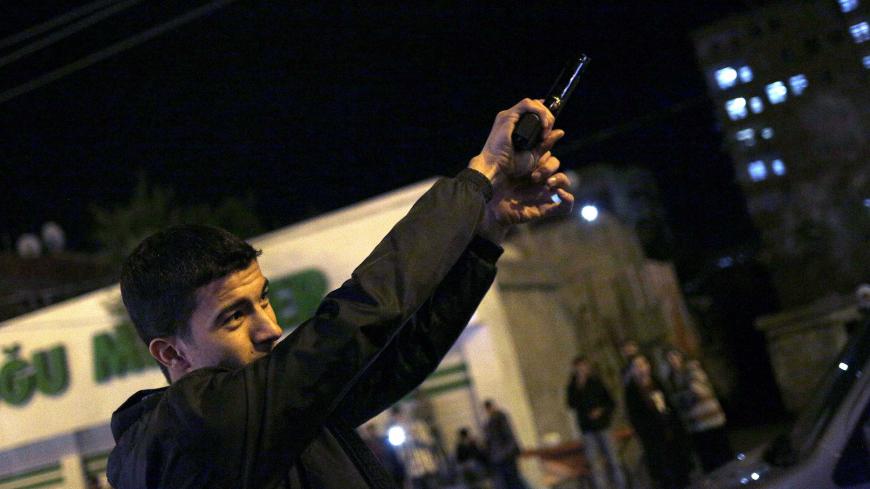 A supporter of Turkey's pro-Kurdish HDP opposition party fires a gun as he celebrates with others the election results outside the party headquarters in Diyarbakir, Turkey, Nov. 1, 2015. - REUTERS/Stoyan Nenov

ANKARA, Turkey — Just two days after the failed coup attempt of July 15, 2016, Turkish presidential adviser Seref Malkoc said on public television that the government should make it easier for citizens to obtain licensed guns to “protect their right to self-defense against coup attempts.” His words failed to generate much debate in the heat of the events, which had claimed the lives of more than 200 civilians among the crowds that took to the streets to resist the putschists.

Then on Dec. 24, 2017, the government issued a legislative decree that granted judicial immunity to civilians involved in the suppression of the coup attempt, ensuing events and acts of terrorism. Alarmed by the vague wording of the provision, opposition parties argued that such immunity would encourage the formation of militia groups and individual armament, warning of uncontrollable consequences and even a civil war.

Some believe the provision is a sign that President Recep Tayyip Erdogan plans to create his own armed militia force as another means to suppress dissent and opposition. Of note, retired Brig. Gen. Adnan Tanriverdi — the head of SADAT, a controversial military consultancy and training company — had joined Erdogan’s team of senior advisers weeks after the coup attempt. Besides SADAT, other entities supportive of the ruling Justice and Development Party (AKP) — such as the Ottoman Hearths, a youth organization, and the People’s Special Forces (HOH), an association founded by a former special forces soldier — have stoked public apprehension. Several months after the coup attempt, the head of the Ottoman Hearths 1453 association had appealed on social media to like-minded “brothers” to “arm themselves in the name of the motherland, the [Turkish] flag and Erdogan.” According to Veli Agbaba, the deputy chair of the main opposition Republican People’s Party (CHP), entities such as SADAT and the Ottoman Hearths are the armed militia of the AKP.

Amid growing outcry over the impunity legislation, SADAT denied it was involved in covert military training camps for civilians, insisting it was a law-abiding defense consultancy company, the first of its kind in Turkey. According to a Jan. 4 statement, images of armed combat on the SADAT website date back to the pre-retirement days of former soldiers who are now working for the company.

In a country already sharply polarized and mired in political tensions, those dubious entities coupled with an uncontrolled trend in individual armament are the source of deepening apprehension in light of an election cycle looming next year, including crucial presidential polls. Earlier this month, former Interior Minister Meral Aksener, who in October founded her own party to challenge Erdogan, spoke of concerns that “those [armed] people will play a role in the elections. … They will provoke chaos if the results are unfavorable [to the government].”

Erdogan, for his part, seems bent on a strategy of ratcheting up tensions ahead of the elections. He has drawn the Nationalist Movement Party (MHP) to his side and portrays the AKP-MHP alliance as the true patriots while maligning the other parties. In a Jan. 9 speech in parliament, he described next year’s elections as a race between “those who are native and national and those whose reins are in the hands of other quarters.”

Senior CHP member Yasemin Oney Cankurtaran believes the judicial immunity clause is encouraging individual armament and violence between people of opposing political views. Speaking in the eastern city of Van on Jan. 11, she said, “[The decree] will lead to an individual armament craze because it has caused grave concern among people about their future. … Some people we talk to say they would not even utter the word ‘gun’ in the past but are now thinking about acquiring guns. The responsibility lies with the AKP, which has left no peace in the country. And [the immunity clause in] the legislative decree is coming on top of all this.”

Besides the increase in individual armament, there is mounting concern over the apparent ease with which people are able to obtain unlicensed weapons. The murder of Helin Palandoken, 17, in October is a case in point. The high school student was shot dead by a lovelorn young man who had purchased his pump rifle online. Many internet sites have come to sell new and second-hand guns at rather cheap prices, complete with shipping and cash-on-delivery services.

The Interior Ministry denies that individual armament is on the rise, arguing that the number of license applications has actually fallen. Regarding online sales, the ministry says it has tightened controls and penalized 55 internet sites.

According to the police’s 2017 report on individual armament, licensed firearms were used in 25,547 criminal incidents last year, while the number of crimes committed with unlicensed guns was more than six times higher, standing at 159,123. This figure alone indicates how easy it has become to obtain guns illegally.

In short, the essential problem lies in the scale of illegal armament and the authorities’ failure to control the illegal trade of firearms and thus their inability to identify and track the owners of such weapons. Hence, the decrease in license applications could be seen as a sign that individual armament has increasingly shifted to the illicit realm, with more and more people unwilling to be registered as gun owners.

The Umut Foundation, the leading campaigner against individual armament in Turkey, estimates that the number of individual guns in the country stands at 25 million, and 85% of them are unlicensed and illicit. Ayhan Akcan, a board member of the foundation, said the online sale of firearms has spiraled out of control and calls for urgent measures.

In remarks to the BBC Turkish service earlier this month, Akcan argued that the judicial immunity clause for civilians was a recipe for bloodshed. The coup attempt, he observed, has resulted in “an incredible atmosphere of fear and insecurity,” leading many to advocate the armament of civilians. “This is very dangerous,” he said, warning of “uncontrolled and risky” groups with a “swollen ego” who “see themselves as close to the government and the state or the owners of this state.” According to Akcan, those groups could take courage from the immunity clause to engage in political violence. “The government must not provide grounds for that,” he said, stressing that the scope of the clause should be narrowed or “there could be massacres on an incredible scale.”

Turkey is no stranger to political violence and civil strife. The lead-up to the 1980 military coup saw deadly clashes between leftist and rightist groups, and in 1978, rightist mobs attacked Alevis and leftists in Kahramanmaras, massacring more than 100 people. In recent years, Alevi homes have been marked in a chain of incidents in various cities, sparking fears of similar attacks. The armament trend, coupled with the impunity clause and mounting political tensions, is further stoking the fears.

Last week, the Interior Ministry launched a probe into HOH, but few expect the move to result in sanctions. Despite the public outcry and the warnings of jurists, the government has refused to back down from the impunity clause for civilians. In this atmosphere, apprehension is growing over the security of the polls next year. Many appear convinced that Erdogan “will do anything” to hold on to power — even if he loses the elections.