Erdogan's 'soldiers' and their threat to dissent

After a controversial decree introducing judicial immunity for citizens involved in the suppression of terrorist acts, many in Turkey are concerned that it will be used to shield pro-government vigilantes. 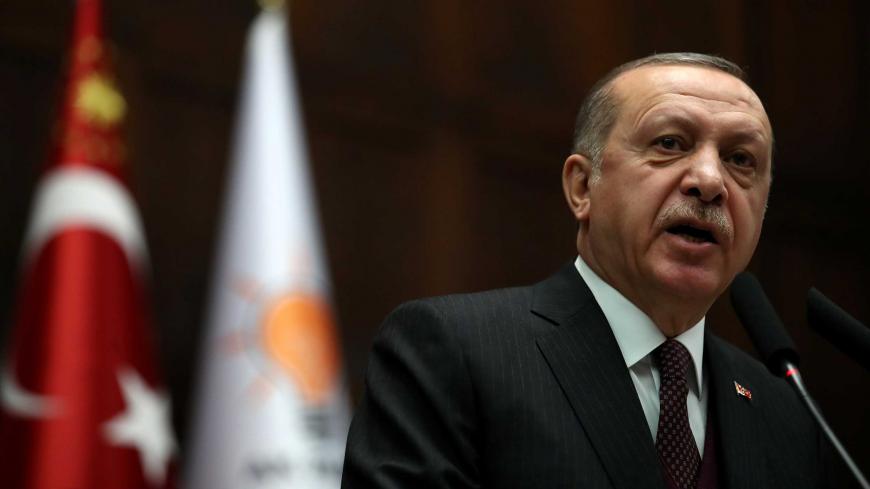 Turkish President Recep Tayyip Erdogan addresses members of parliament from his ruling Justice and Development Party during a meeting at the Turkish parliament in Ankara, Jan. 9, 2018. - REUTERS/Umit Bektas

A legislative decree by the Turkish government granting judicial immunity to civilians involved in the suppression of terrorist acts has rekindled suspicions and concerns about pro-government “militia forces” taking shape in the country. The emergence of dubious groups that consider President Recep Tayyip Erdogan their “commander in chief,” coupled with the impunity provision introduced Dec. 24, is seen by many as a mounting threat to opposition quarters and expressions of dissent.

The government maintains that the impunity decree is meant to protect ordinary citizens who took to the streets against the coup attempt on July 15, 2016, although no one has faced charges for such actions. According to the opposition, the vague wording of the order makes it applicable to future events and is intended to shield attacks on anti-government protests.

The alarm over the clause comes amid concerns about what some believe to be budding “militia” groups loyal to the government. One of the most controversial groups, the People’s Special Forces (HOH), is officially registered as an association. With branches in 22 of Turkey’s 81 provinces, and with thousands of members, the group made headlines with photos of its chairman, armed and in fatigues, and of cars equipped with emergency lights and painted to look like security forces vehicles. Statements by group leaders and social media posts by members have reinforced misgivings that HOH is not an ordinary association.

According to HOH chair Fatih Kaya, the group represents “this noble nation that stood steadfast against murderers and dashed to martyrdom.” The association came to the broader public's attention during the coup attempt, when its members were among the thousands of Turks who took to the streets to stop the putschists. For Kaya, it was an act of "jihad." In an interview with a local news site in Trabzon, the location of HOH's main office, Kaya said, “People must know that this is jihad. … Jihad is not easily declared. The head of our state and our commander in chief, Recep Tayyip Erdogan, declared jihad for us. Thanks be to the Lord, we are aware of this.”

Neither Erdogan nor any other government official has objected to Kaya’s description of the event as a “jihad,” or Islamic holy war. Meanwhile, pictures have emerged of Kaya in Erdogan’s company.

So, who is Fatih Kaya? In his most striking photographs, he is seen armed and clad in military fatigues in Syria. He says he went there to “help the Turkmens.” He also claims that he is a public servant, but has not specified what job he actually holds.

Some suspect that Kaya might be involved with the Islamic State (IS). In a parliamentary question to the interior minister last month, Meral Danis Bestas, a lawmaker for the pro-Kurdish Peoples’ Democratic Party (HDP), drew attention to media reports that Kaya was linked to IS and urged the minister to clarify the matter. She called the HOH a “paramilitary organization” and asked a series of questions about its activities, including how group members were able to obtain arms and how many of them are members of the ruling Justice and Development Party (AKP). Bestas has yet to answer any questions.

Another entity at the center of the militia controversy is International Defense Consulting (SADAT), a company that claims that one of its objectives is to contribute to the military development of the Muslim world. SADAT came into the public eye in relation to security operations in Turkey’s Kurdish-majority southeast.

In 2015, prominent Kurdish politician Sebahat Tuncel claimed that armed men from a group called SADAT had attempted to burn 34 villagers detained by the security forces in Diyarbakir province. The men were “bearded and had Arabic inscriptions on their arms,” according to quotes in the Turkish press by Tuncel. “They brought gasoline and wanted to burn the villagers,” she said, adding that an army officer had prevented the group from doing so.

Shortly afterward, SADAT's founder, Adnan Tanriverdi, became an adviser to Erdogan. Most recently, the company, which openly advertises training for irregular warfare and counterinsurgency, has been linked to alleged military training camps in several Turkish provinces.

In an interview with Sozcu in early January, former Interior Minister Meral Aksener, who in October founded her own party to challenge Erdogan and the AKP, voiced concerns about “men who have been recently roaming around with long-barreled weapons.” Without disclosing her sources, she spoke of “very serious allegations” about those individuals.

“We hear that there are military training camps in Tokat and Konya, for instance,” Aksener said. “There is intense talk that those people will play a role in the elections, that they will provoke chaos if the results are unfavorable [to the government]. The entity called SADAT is one of them. … I’m issuing a warning now and calling for measures.” An aide to Aksener said he had received reports about a third camp in Kocaeli.

SADAT denied the allegations, but the Defense Ministry remains mum on opposition requests for information about the company’s training activities in Turkey, how it is supervised, what activities in the realm of defense it engages in and whether the Turkish military is aware of it.

The Ottoman Hearths is another controversial group that came to public attention in 2015 with attacks on offices of the HDP and the main opposition Republican People’s Party. The group is vocally pro-AKP and has taken to heart the slogan “Erdogan is our honor.” Its chair, Kadir Canpolat, has expressed gratitude to Erdogan, saying, “We owe the Ottoman Hearths to him.” Canpolat also has described the group as Erdogan’s “soldiers.” Of note, Canpolat was among several people rounded up in 2006 ahead of Pope Benedict’s visit to Turkey on suspicion of planning a hostile action against the pontiff.

How the aforementioned entities are financed remains a big question. Observers note that the “militia” controversy has grown simultaneously with a huge increase in spending from the state’s discretionary fund, which is reserved for secret missions and is exempt from public scrutiny. In January 2017 alone, close to 164 million Turkish liras ($43.5 million) were spent from the fund.