Infighting within the major alliance of six Turkish opposition parties over the role of the country’s largest pro-Kurdish group has the ruling party palpably gleeful. 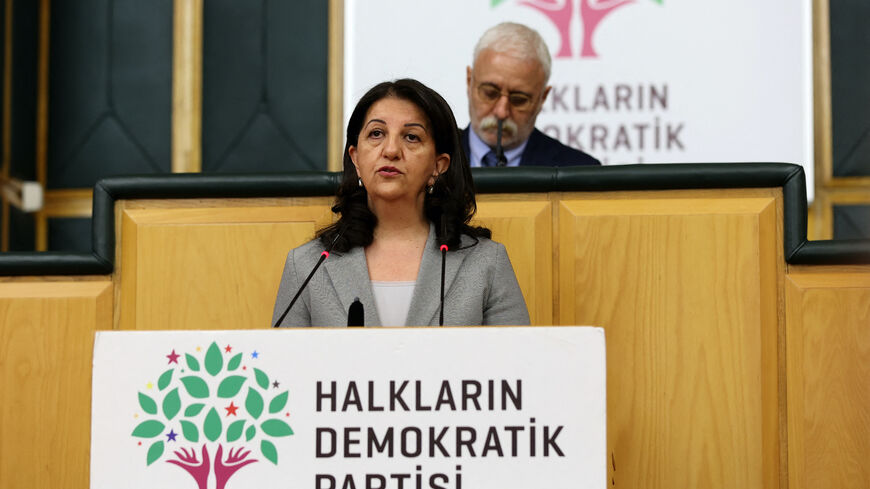 Co-leader of the People's Democratic Party Pervin Buldan delivers a speech during a party meeting at the Turkish Grand National Assembly in Ankara on April 26, 2022. - ADEM ALTAN/AFP via Getty Images

Turkey’s alliance of six opposition parties is in a war of words over the role of the country’s largest pro-Kurdish group, part of an escalating debate that can only benefit Turkish President Recep Tayyip Erdogan ahead of critical elections due to be held by June 2023.

Aksener was responding to comments by a member of the main opposition Republican People’s Party (CHP). CHP lawmaker Gursel Tekin had asserted in a Sept. 5 television interview that HDP members could be appointed as ministers in a government to be formed by his party and other opposition groups. His words triggered a flurry of angry tweets from Iyi officials. Aksener’s statement gave them an official seal of approval.

The HDP, the third-largest party in the Turkish Parliament, is accused of advocating on behalf of the outlawed Kurdistan Workers Party (PKK) militants. Countless HDP officials and sympathizers including former co-chair Selahattin Demirtas are serving lengthy prison sentences on thinly evidenced convictions. On Sept. 3, HDP lawmaker Semra Guzel was arrested as she allegedly sought to flee the country.

Guzel is facing charges of PKK membership and financing the organization. She was stripped of her parliamentary immunity in March. Much of the evidence against her is based on a romantic liaison between herself and a guerrilla, making her a “terrorist” herself. A photo of Guzel posing in front of a waterfall with her late fiancé was found on his body when he was killed in clashes with the Turkish military in Iraqi Kurdistan in 2017.

Guzel denies the charges, saying the relationship took place when the current government was conducting peace talks with the PKK. The talks collapsed in 2015 together with a two-and-a-half-year mutually observed cease-fire, paving the way for a new cycle of violence that is claiming dozens of lives on both sides.

In June 2021, the Constitutional Court accepted an indictment filed by the chief prosecutor’s office to ban the HDP. Its fate, the conventional wisdom goes, will largely be determined by Erdogan’s own electoral calculations.

Yet even as Erdogan and mainstream opposition parties demonize the HDP, they hope to draw some of its estimated six million supporters, whose votes are poised to tip the outcome of the elections as they did in mayoral contests in 2019. The challenge facing Erdogan’s Justice and Development Party (AKP), his far-right nationalist partners and the so-called "six-party table” of opposition parties including one Islamist party and two AKP spinoffs is to enlist the HDP’s support for the forthcoming elections without antagonizing Turkish nationalists.

CHP leader Kemal Kilicdaroglu has sought to strike this balance by excluding the HDP while impressing on the party’s leaders the need to unite against Erdogan. However, as the reaction to Tekin’s remarks show, it’s a near impossible task, with Iyi pushing ever harder against any association with the HDP.

Today, Iyi’s provincial chair for Yozgat, a nationalist stronghold in central Anatolia, resigned from the party in protest. Metin Ozisik, a former major who fought in the Turkish army’s ranks against the PKK, said “As someone who spent four years combatting terrorism, who carried martyrs in his arms … I cannot be around the same table with a mentality that says cabinet ministers’ posts can be given to the PKK.’”

One reason for Iyi’s increasingly hawkish stance is the emergence of the Zafer or Victory party led by the ultranationalist academic Umit Ozdag, who is campaigning on an overtly racist platform to expunge the country of its estimated eight million immigrants. Some commentators have suggested that Ozdag is being egged on if not actually propped up by the AKP to draw votes away from the opposition, especially from Aksener.

Kilicdaroglu sought to defuse the row, calling the claims that the HDP was being promised posts "all lies.” He appealed for calm yesterday, saying, “We are sick of fights.” The CHP leader stressed nonetheless that the HDP was a political party whose rights needed to be respected in keeping with democratic norms. “The HDP is a separate party and they want to form a separate alliance,” Kilicdaroglu said.

The glee within the AKP ranks is palpable. Hilal Kaplan, a pro-Erdogan columnist for the government mouthpiece Sabah, shared a video on social media of Iyi lawmaker Yavuz Agiralioglu saying he too would never accept sharing power with the HDP. “The HDP is not at the table, but the six-member alliance’s biggest partner has already promised it cabinet positions. I, for one, am convinced,” she tweeted.

The HDP’s reaction has been fairly muted so far. HDP lawmaker Meral Danis Bestas said the party “is not haggling for cabinet ministries with anybody and has no approach beyond its declared principles.”

“We’d like to hear how those who seek to denigrate HDP members through their artificial debates using ugly language plan on embracing society and running the nation,” Bestas tweeted. Privately HDP officials air disgust, but refrain from doing so publicly so as not to be blamed for a potential collapse of “the table.”

The Kurds are not the only factor bedeviling the opposition's efforts to hang together. The matter of who they will field as a joint candidate to run against Erdogan for the presidency is another. In recent months, a consensus appeared to be emerging around Kilicdaroglu. Current opinion polls suggest that he could beat Erdogan in a runoff, though he still trails behind the CHP mayors of Istanbul and Ankara.

The CHP’s trademark internal strife coupled with Iyi’s allergy to the HDP could yet prove the opposition’s undoing. That, in any case, is what Erdogan is banking on. If nothing else he wants to “neutralize” the Kurds — that is, to get them to boycott the polls, said Roj Girasun, the founding director of RAWEST, a research and polling outfit based in the mainly Kurdish city of Diyarbakir.

“The Kurds are realistic and rational. They aren’t expecting to become ministers or the like,” Girasun told Al-Monitor. But the last days’ rhetoric “has wounded their dignity, left a scar,” he said.